Was it general market optimism or analyst bullishness?

On Wednesday, Virgin Galactic (SPCE -5.20%) stock bounced back from Tuesday's sell-off. Because the share price really took off after 2 p.m. EDT, chances are that most of those gains (3.8% by the closing bell) came in response to news that the Federal Reserve plans to keep its benchmark fed funds interest rate near 0% through 2023 -- a policy that will limit the degree to which bonds will be competing with stocks for investors' attention. That announcement left investors generally ebullient about the stock market's prospects.

But there was also some company-specific good news for Virgin Galactic. 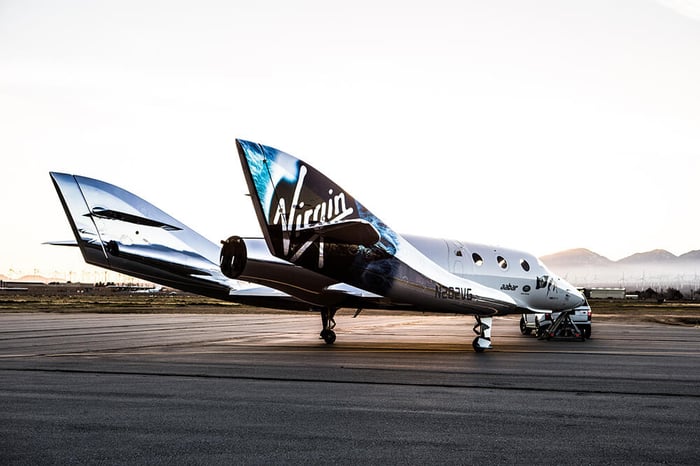 Specifically, StreetInsider.com reported that after the close of trading Tuesday, analysts at Truist Securities (formerly BB&T Securities, prior to BB&T's merger with SunTrust), initiated coverage of Virgin Galactic stock with a buy rating and a $50 price target.

As "one of the first market entrants, with proprietary technology, vertically integrated operations" (such as an integrated spaceship-building operation -- The Spaceship Company), and "plans for a consumer-oriented experience leveraging the Virgin brand," the Truist analysts predict that by 2030, Virgin Galactic will control 50% of the space tourism market.

So far, so good. The space tourism market doesn't really exist yet, after all, and only two companies have clearly stated their intention to create one -- Virgin Galactic and Jeff Bezos's Blue Origin. In a situation like this one, guesstimating that these two competitors might split the market 50-50 seems perfectly logical -- especially if you give the companies most of a decade to work out the kinks and begin sending tourists to space.

In the nearer term, meanwhile, Truist stated an opinion held by some Virgin Galactic skeptics: The fact that the company has postponed test flight operations into May 2021 probably means that it won't be able to begin flying commercially this year. In Truist's view, a commercial start-up is more "likely ... in early 2022."

Near term, that sounds more like a bear argument to me -- but it's not preventing Truist from rating Virgin Galactic stock a buy.