Please ensure Javascript is enabled for purposes of website accessibility
Log In Help Join The Motley Fool
Free Article Join Over 1 Million Premium Members And Get More In-Depth Stock Guidance and Research
By Will Healy - Mar 18, 2021 at 11:04AM

These stocks have not yet finished moving higher.

Warren Buffett and his team run one of the most closely watched investment portfolios in the investment world. On the whole, Berkshire Hathaway's (BRK.A 0.10%) (BRK.B -0.03%) businesses have returned an average of 20% per year since 1965. Today, some holdings in Berkshire Hathaway's portfolio now make more sense as holds rather than buys. Still, stocks such as DaVita (DVA 0.19%), StoneCo (STNE -0.21%), and T-Mobile (TMUS 0.13%) hold the potential to continue to deliver significant returns. 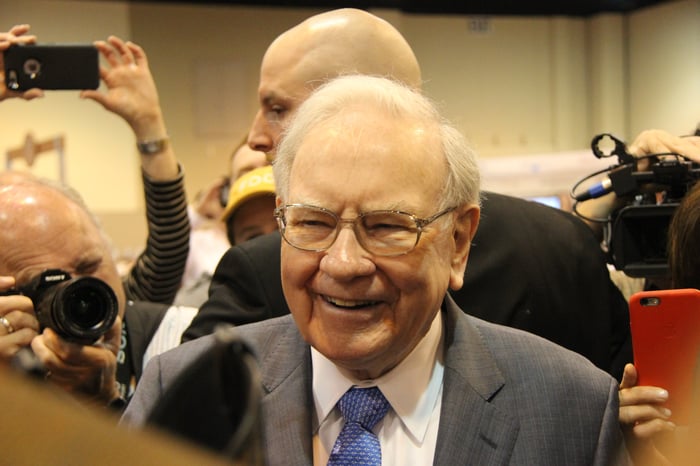 DaVita provides dialysis services. The company also benefits because Medicare accepts every American with end-stage renal disease (ESRD), or kidney failure requiring dialysis, regardless of age. This gives every American some level of coverage for dialysis. Moreover, DaVita controls about 37% of this market, while peer Fresenius (FMS 1.05%) claims 35% of that market share, according to HealthCare Appraisers.

Still, this market share has not insulated the company from all threats. In states like California, Assembly Bill 290 limited third-party reimbursement rates for dialysis clinics. Fortunately for DaVita, courts have so far prevented its implementation. However, such initiatives, particularly in a large state like California, could limit revenues.

Also, holistic approaches could also challenge the conventional dialysis treatments in which DaVita specializes. Companies such as Somatus seek to prevent the need for dialysis. While such advancements help kidney patients, they also threaten DaVita's revenue stream.

Additionally, COVID-19 made its clinics particularly dangerous as the pandemic became a concern for its patients. To this end, DaVita has had to rearrange times and locations or offer home dialysis to separate patients who test positive. Despite these challenges, revenue increased by just over 1%, while net income fell by around 3%. Although COVID-19 raised operating costs, net income would have risen by nearly 10% if not for a one-time, $105 million income boost from discontinued operations in 2019.

Despite slightly lower income, DaVita stock has risen by around 50% over the last 12 months. Its share price growth significantly outpaces Fresenius, which rose about 15% during the same period. This increase took the P/E ratio to about 17, up from 14 one year ago and only slightly higher than the 16 multiple for Fresenius. Though slightly higher, this likely is not enough change to affect the investment thesis for DaVita. 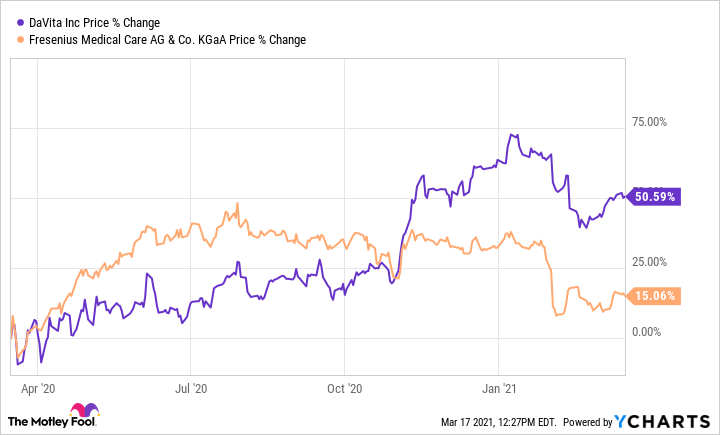 Investors will have to continue to watch the dialysis market. Nonetheless, as long as DaVita maintains its business and outperforms Fresenius, it should continue to serve Buffett and those who follow him well.

StoneCo stands out with flexible products, a focus on "no bureaucracy," and service close to its customers. This approach allows it to quickly open a localized hub and train a salesforce wherever it needs to, making it easier to integrate clients into StoneCo's ecosystem. Though PagSeguro and MercadoPago compete on product offerings, they do not emphasize localized sales and customer service to this degree.

Brazil's struggles with COVID-19 have presented challenges. The pandemic dramatically and temporarily slowed the company's growth. In 2020, revenue increased 29% for the year, with total payment volume (TPV) rising 63%. Net income increased by 4% as investments in technology, higher advisory costs related to a recent merger, and higher marketing costs cut into revenue increases. In comparison, TPV rose 55% in 2019, while revenue and net income surged by 63% and 164%, respectively that year.

Investors should also note that StoneCo outperformed PagSeguro, which reported higher payment volumes and revenue for 2020 of 41% and 19% year over year. PagSeguro's net income fell by nearly 6% for the same period.

StoneCo stock rose by about 157% over the last year, slightly exceeding PagSeguro's rise of 143% over the same period. Also, StoneCo remains considerably more expensive, supporting a P/E ratio of over 120, compared to PagSeguro's multiple of around 64. Still, the rising net income and faster TPV and revenue increases help StoneCo justify that premium. Assuming growth rates can return to pre-pandemic levels, StoneCo will likely continue to justify the premium, keeping Berkshire Hathaway invested in the stock. 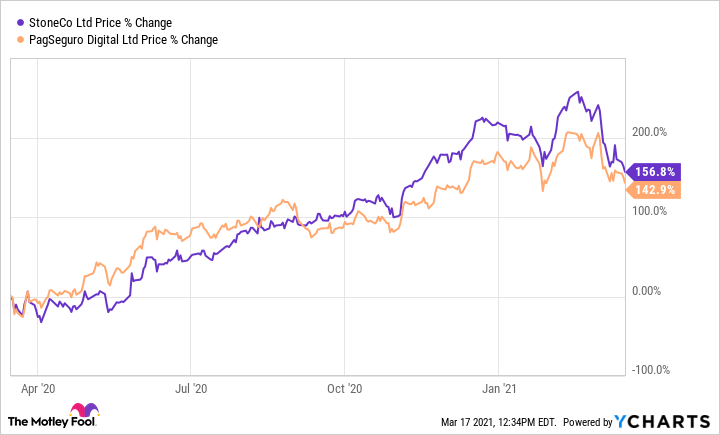 T-Mobile provides nationwide 5G service, the latest wireless technology widely deployed in the U.S. Only T-Mobile, AT&T (T 0.94%), and Verizon (VZ 0.88%) provide this service nationwide. T-Mobile has long made competitive gains by offering lower prices and gaining market share. It made a more significant stride when it acquired both the customer base and spectrum of rival carrier Sprint. T-Mobile now controls about 29% of the wireless market, according to Evercore.

Licensed spectrum, which gives the owner control of a frequency in a given geographic area, enables more wireless coverage. The company has struggled with business customers who tend to place a greater emphasis on quality. Thanks to the additional spectrum from Sprint and recent spectrum auctions, T-Mobile can now improve its quality of service, likely helping to attract higher-end customers.

Despite this challenge, T-Mobile continues to make gains. T-Mobile acquired 5.6 million net additions in 2020, better than AT&T's 1.6 million wireless net additions and Verizon's loss of customers during that period.

Nonetheless, it has not matched Verizon or AT&T in cash flow generation. T-Mobile generated $3 billion in free cash flow in 2020, versus $27.5 billion for AT&T and $23.6 billion for Verizon.

With its massive investment in spectrum and equipment to build a 5G network, the company's cash flow remains critical. T-Mobile spent $11 billion on property and equipment in 2020. While AT&T and Verizon also spend heavily in this area, equipment spending did not cut into their cash flows as significantly. Also, unlike its peers, T-Mobile stock does not pay a dividend.

However, this has not stopped T-Mobile shares from rising by 65% over the last year. This dramatically bested Verizon's 10% gain and AT&T's 5% drop over the same period. 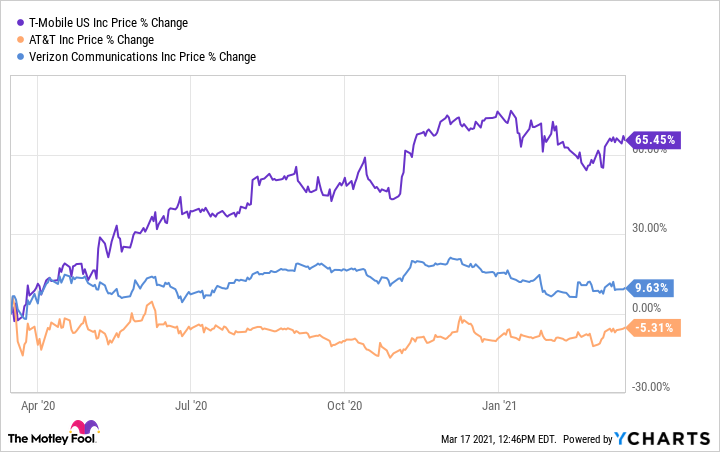 Given this performance, one can easily understand why Buffett overlooked Verizon's and AT&T's 4.5% and 7% respective cash returns despite a longtime preference for dividend stocks. If T-Mobile can continue to pressure its peers on both price and quality, the outperformance could easily continue.