Please ensure Javascript is enabled for purposes of website accessibility
Log In Help Join The Motley Fool
Free Article Join Over 1 Million Premium Members And Get More In-Depth Stock Guidance and Research
By Leo Sun - Mar 18, 2021 at 9:15AM

Which software company has more room to run this year?

Adobe Systems (ADBE 1.19%) and Datadog (DDOG -1.80%) both generated impressive returns for investors over the past 12 months. Adobe's stock advanced nearly 60% as demand for its cloud-based software remained stable throughout the pandemic. Datadog's stock roughly tripled, fueled by robust demand for its unified software monitoring services.

Datadog, which was founded in 2010 and went public in 2019, was clearly a more exciting investment for growth-oriented investors. But Adobe, which successfully transformed its portfolio of desktop-based software into cloud-based services over the past eight years, also posted solid growth for a 28-year-old tech giant.

As rising bond yields spark a rotation from growth stocks to value stocks, will Datadog remain the better investment this year? Let's dig deeper into these two very different software companies to decide. 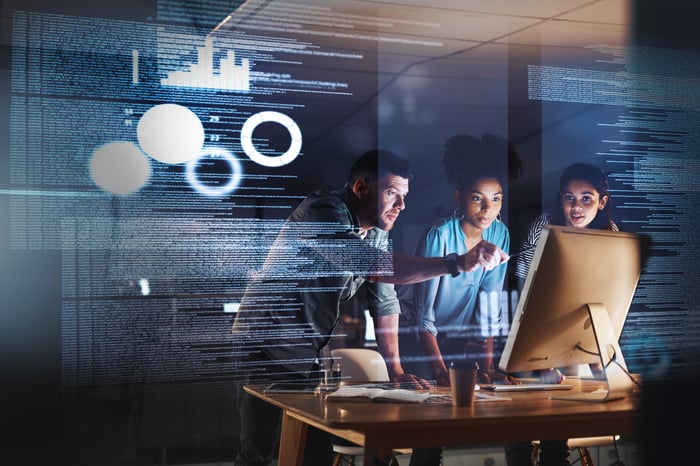 The differences between Adobe and Datadog

Adobe generated 72% of its revenue from its Digital Media segment, which houses its Creative and Document clouds, in fiscal 2020. These clouds offer its flagship software products -- including Photoshop, Premiere Pro, Illustrator, and After Effects -- as subscription-based cloud services.

The rest of Adobe's revenue mainly came from its Digital Experience segment, which provides cloud-based advertising, e-commerce, and analytics services to enterprise customers.

Adobe's revenue increased 15% to $12.9 billion in 2020, as its Digital Media and Digital Experience revenue rose 20% and 12%, respectively. Demand for its Creative and Document Cloud services remained broadly stable throughout the year, even as some of its end markets -- including the entertainment industry -- experienced disruptions during the pandemic. 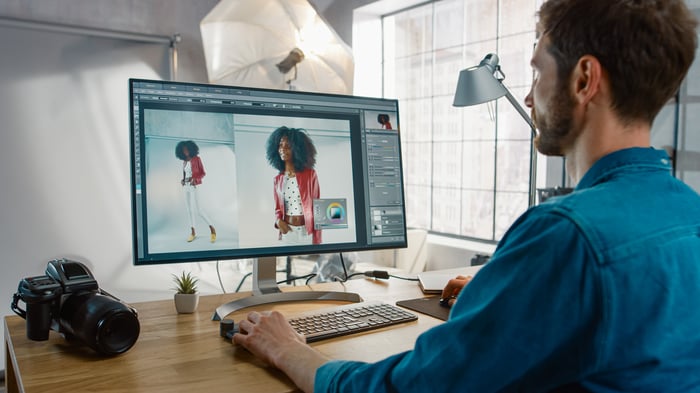 Its Digital Experience segment felt more of an impact from the downturn, as the sluggish growth of its advertising cloud during the crisis offset the strength of its other enterprise-facing services. It also discontinued the advertising cloud's actively managed services for programmatic TV ads, which generated lower-margin revenue than its automated self-serve ads.

But Adobe's adjusted operating margin still expanded during the year, it repurchased $3 billion in shares, and its adjusted earnings improved 28%. It expects its revenue and adjusted earnings to grow 18% and 11%, respectively, in 2021. Its stock doesn't look particularly cheap at 34 times forward earnings and 14 times this year's sales, but its evergreen stability arguably justifies that slight premium.

Datadog's strategy of "landing and expanding" -- meaning it signs a customer onto a single service to cross-sell additional services -- is working. At the end of the fourth quarter, 22% of its customers were using four or more of its services, up from just 10% a year earlier. Its net retention rate, which gauges its revenue growth per existing customer, has remained above 130% for 14 straight quarters.

Datadog posted an adjusted net profit of $71.6 million for the full year, compared to a net loss of $471,000 in 2019. But unlike Adobe, Datadog remains deeply unprofitable on a GAAP basis, which includes its stock-based compensation and other one-time expenses.

Datadog expects its revenue to increase 37%-38% in 2021, but for its adjusted earnings to decline 36%-55% as it integrates two recent acquisitions and ramps up its spending. Based on those expectations, Datadog trades at nearly 350 times forward earnings and over 30 times this year's sales.

I believe Datadog still has room to grow over the long term, but it's a weaker investment than Adobe right now.

Adobe's stock is cheaper, and it expects its revenue growth to accelerate slightly this year as the pandemic-related headwinds for its Digital Experience unit fade. Datadog's stock is pricey relative to its growth, and its valuations will be tough to justify this year as its revenue growth decelerates and its profits decline. The ongoing rotation from growth stocks could exacerbate that pain.

Therefore, it's fairly safe to buy a large position or accumulate more shares in Adobe right now, but I'd only recommend nibbling on Datadog at these frothy levels.

Why Datadog Stock Is Falling Today

Why Datadog Stock Plunged 20% in April

Datadog Stock Is Crashing on Thursday