The answer may lie in a simple concept.

The Nasdaq Composite (^IXIC -2.89%) was the stock market leader throughout most of 2020, powering ahead to much greater gains than its fellow major benchmarks. In particular, high-growth stocks that were able to hold up well despite the recessionary conditions in the broader economy stood out as big winners and rewarded their shareholders handsomely.

However, that narrative has changed lately. As of 11 a.m. EDT on Thursday, the Nasdaq was down another 1.7%, building on losses that have taken the index into correction territory even as other benchmarks were at or near record highs. Moreover, it seems as though the Nasdaq is falling even though Fed chair Jerome Powell told investors Wednesday that the economy appeared to be in solid shape.

There's one possible answer for this apparent disconnect. If investors are actually paying attention to a common way of valuing high-growth stocks, then the Fed's nonchalance about a key impact that a stronger economy could bring might explain the near-panic among shareholders of those stocks. 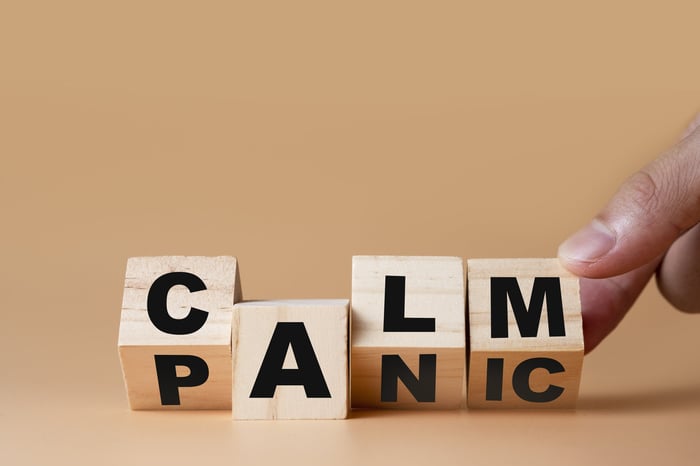 However, those declines are just the latest in a series of drops for these stocks and many like them. Tesla is trading about 25% lower than its all-time highs from just a couple months ago. Zoom has given up roughly 40% from its record levels late last year. The move seems to reveal skepticism about whether the growth stocks have seen their shares rise too far, too quickly.

What the Fed has to do with high-growth stocks

It might seem as though the Federal Reserve's actions wouldn't necessarily have any impact on high-growth stocks. Investor interest in these companies has been so high that access to capital hasn't been a problem. Many of them have more than enough cash to make it through tough times in the future, and some of them are even cash-flow positive and can sustain themselves simply by maintaining current business levels.

However, the recent rise in interest rates due to inflationary fears has been troubling to investors. One potential impact is that if you value a company based on the discounted value of its future financial results, then higher interest rates make the performance that comes further into the future less valuable. With rates at zero, it almost doesn't matter from a valuation standpoint whether a company makes money now or five years from now, and low rates reward companies that defer smaller profits now in favor of larger profits later. That's been the basis for the huge run-ups in these stocks.

Higher interest rates reverse that trend. Suddenly, companies will get rewarded for producing results now rather than later. Valuations on companies that will take years to play out will take a hit.

For long-term investors, that actually might be good news. It would signal that the stock price declines aren't about fears that companies aren't going to be able to live up to their full potential. Rather, it just reduces the value put on those same strong future results.

If you can get the same strong business at a discount, you should jump at the chance. That's the advantage long-term investors have, and now's the time to look closely at some of the stocks the rest of the market is giving up on.