Please ensure Javascript is enabled for purposes of website accessibility
Log In Help Join The Motley Fool
Free Article Join Over 1 Million Premium Members And Get More In-Depth Stock Guidance and Research
By Eric Volkman - Updated Mar 19, 2021 at 11:06AM

A user's hands will act as a controller for the AR system the social media giant is developing.

Many Facebook (META 7.19%) investors and users don't realize that the company devotes considerable resources to developing next-generation human-computer interface (HCI) technology. Perhaps that's about to change: On Thursday, the social media giant (and somewhat under-the-radar hardware developer) took the wraps off a wristband that will be a component of an augmented reality (AR) system.

AR combines computer-generated elements with aspects of the real world; while still in a relatively early stage, it nevertheless is used in a variety of applications, such as games. 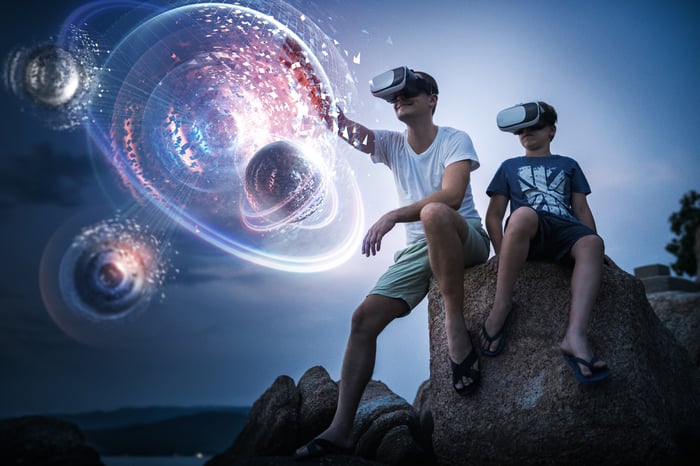 Facebook's wristband will essentially act as a controller for the company's AR glasses, a product that has been in development for years. CEO Mark Zuckerberg strongly believes that such devices will become commonplace by 2030. His company plans to release a preliminary set later this year, but its functionalities will be limited.

The choice of a wristband as a controller for AR headsets is unusual. In its official blog, the company's Facebook Reality Labs unit explained:

The wrist is a traditional place to wear a watch, meaning it could reasonably fit into everyday life and social contexts. It's a comfortable location for all-day wear. It's located right next to the primary instruments you use to interact with the world -- your hands.

The device does indeed look like a watch, albeit a fairly bulky one. Facebook said the wristband works through electromyography (EMG), a method by which sensors interpret electrical motor nerve signals from the body, "translating" them into digital instructions that command a device.

In hyping the potential of the wristband, Facebook offered no projections as to how it, or its broader AR system, might affect its business fundamentals.