Please ensure Javascript is enabled for purposes of website accessibility
Log In Help Join The Motley Fool
Free Article Join Over 1 Million Premium Members And Get More In-Depth Stock Guidance and Research
By Jeremy Bowman - Mar 24, 2021 at 7:47AM

The stock has been one of the biggest winners during the last year, but things are about to change.

The online home furnishings company sits at the intersection of two of the biggest pandemic-related trends: E-commerce and demand for home goods, both of which were driven by the stay-at-home measures during the crisis as Americans shopped online instead of in stores, and stocked up on home furnishings to adjust to life working, learning, and spending most of their time at home.

What's surprising about Wayfair, which has jumped more than 1,000% since its nadir a year ago, is that unlike other pandemic winners, shares are still flirting with all-time highs even as vaccines are quickly rolling out in the U.S., interest rates are rising in preparation for the reopening, and investors have begun rotating into recovery stocks in sectors like energy, financials, travel, and entertainment.

For instance, shares of Zoom Video Communications, the videoconferencing tool that has become a utility during the pandemic, are down 41% from their peak in October. Peloton, the connected fitness star of the pandemic, is off 33% from its high in January, and Shopify, the e-commerce software leader, is down 23% from its February peak.

Wayfair, on the other hand, is down less than 10% from its peak in January, and the stock actually surged after its recent earnings report, even as the company missed revenue estimates. Analysts cheered the company's improved profitability outlook as 2020 marked its first full-year profit.

While the company made a significant leap in 2020, it's facing some difficult comparisons, as the tailwinds from the pandemic will roll off as the economy reopens. 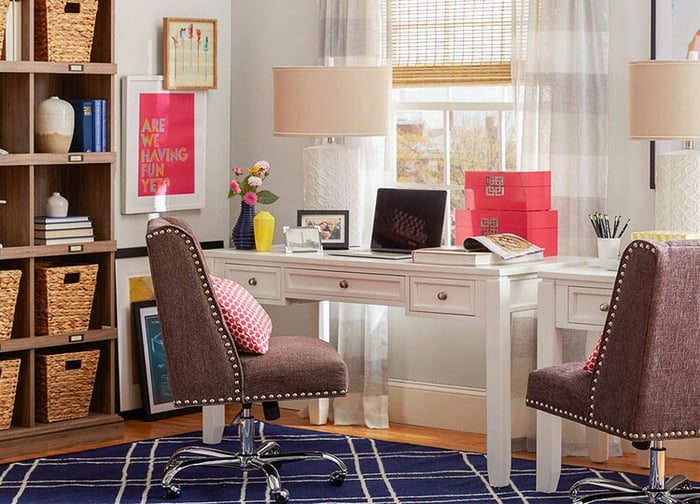 The key question for investors at this point is whether Wayfair can capitalize on the momentum in 2020, which led to a 54% jump in active customers to 31.2 million, showing that millions of new customers have been introduced to Wayfair for the first time.

In the first quarter through Feb. 25, management said that revenue growth was in the mid-50% range, but it acknowledged that it would face tough comparisons in March as sales began to spike last year due to the COVID-19 lockdown. Wayfair didn't provide revenue guidance for the quarter, but the company did say it expected to turn in its fourth straight quarter of adjusted EBITDA profitability. However, based on the company's line-time forecast, operating income seems likely to only be around $20 million, down from $100 million in the fourth quarter.

Looking at the long term, management said it believed it can exceed its adjusted EBITDA forecast of 8% to 10% margins from its 2014 IPO. However, the company also acknowledged the uncertainty it faces this year. CFO Michael Fleisher said on the earnings call: "How the back half of March, and frankly, a good part of Q2 performs versus 2020 is very difficult to forecast."

What other home goods retailers are saying

Wayfair is far from the only home furnishings company to see a surge last year. In fact, nearly every home-related business experienced a boom, which seems to indicate that Wayfair's strong performance owed more to its positioning in the home goods sector rather than its status as a pure-play e-commerce company. Both Home Depot and Lowe's saw sales skyrocket, for example, but Home Depot was more sober about 2021, saying that if demand patterns persisted from the second half of 2020, that would imply flat to slightly positive comparable sales. Meanwhile, Williams-Sonoma (WSM -2.61%), one of Wayfair's closest competitors, called for mid- to high-single-digit revenue growth this year after a 17% increase in comparable sales last year.

It's clear from those numbers that investors should expect Wayfair's growth to slow significantly this year, especially after a 55% surge last year. But the biggest problem for the company isn't just that it's lapping a strong performance a year ago, but that consumer spending habits are likely to shift to discretionary categories like restaurants, travel, and entertainment once it's safe to do so, which should happen by this summer, if not sooner.

That will create a tough environment for Wayfair and its peers, and it could mean that last year's blowout performance was just a one-time benefit, not a lasting trend.

Analysts see revenue in the last three quarters of 2021 growing less than 4%, and expect earnings per share to fall 50%, as the company delayed some hiring last year, helping to lift profits. However, that slowdown doesn't seem to be reflected in its current share price.

Compared to Williams-Sonoma, for example -- another home goods retailer that does nearly 70% of its business online -- Wayfair looks much more expensive, trading at a forward price-to-earnings (P/E) ratio of more than 100, while Williams-Sonoma's forward P/E is less than 20.

Investors may want to take advantage of the recent windfall and pocket their gains in Wayfair stock before consumer demand shifts back to the pleasures that so many were deprived of over the last year.