Please ensure Javascript is enabled for purposes of website accessibility
Log In Help Join The Motley Fool
Free Article Join Over 1 Million Premium Members And Get More In-Depth Stock Guidance and Research
By Lee Samaha - Mar 24, 2021 at 7:47AM

The railroad stock still has something to offer a certain type of investor.

Many investors buy railroad stocks for the surety of their dividends. They operate in relatively secure industries, with strong business moats, and even own their own infrastructure. As such, investing in a railroad can be compared to parking cash in a bank account or buying a U.S. Treasury. That said, Union Pacific's (UNP 1.89%) dividend yield is now 1.8%, and interest rates have been on the rise recently. As such, investors might prefer to simply put money into bonds or in the bank rather than take on the extra risk of buying a stock.

Is it now time to give up on the stock, or buy more? Let's take a closer look at what's going on.

Rising interest rates certainly can pressure stock prices, as institutional investors may switch to buying bonds instead of equities. However, it's tough to predict where interest rates will go, so it doesn't make sense to sell Union Pacific because of the possibility of rates rising.

And if you're thinking of selling Union Pacific shares and putting your money into something tied to interest rates, note first that the current dividend yield on Union Pacific stock is higher than the 10-year Treasury yield, and the railroad has the potential to grow its dividend because it can grow its earnings. 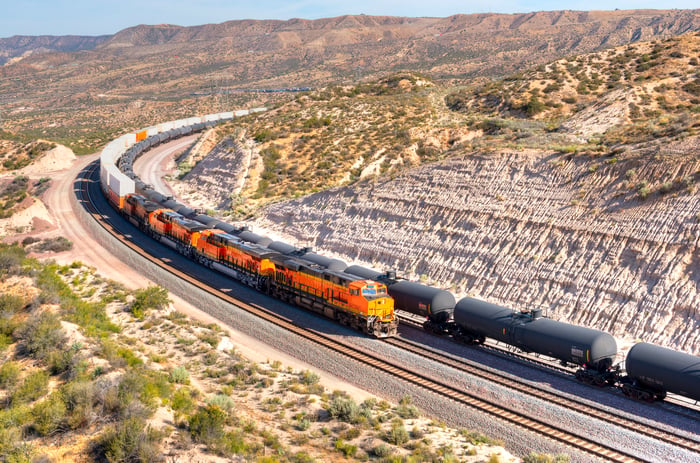 In fact, the transportation stock aims to pay 40% to 45% of its net income in dividends so as its earnings per share (EPS) rises, so should its dividend per share (DPS). 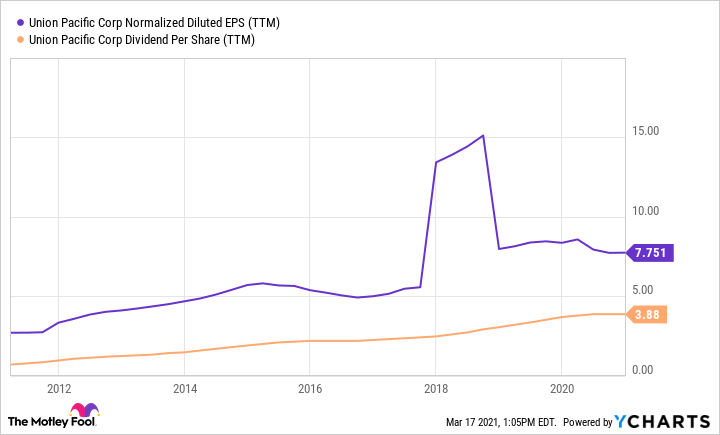 Second, Union Pacific has good earnings growth prospects, not least through its ongoing margin expansion efforts via its precision scheduled railroading (PSR) initiatives. In a nutshell, PSR is a set of railroad management techniques designed to generate the same revenue using fewer assets. It emphasizes running trains at fixed times at fixed points on a network instead of the traditional hub-and-spoke model.

Most of the major U.S. railroads are on a PSR drive to improve their operational ratios (OR). Don't be intimidated by the jargon, OR means operating expenses divided by revenue, so a lower number is better. A lower OR means the railroad is generating a higher earnings margin.

All the evidence supports the idea that PSR initiatives are working, as the major U.S. railroads implementing PSR (in the chart below) have seen improvement in operating margin over the last few years. 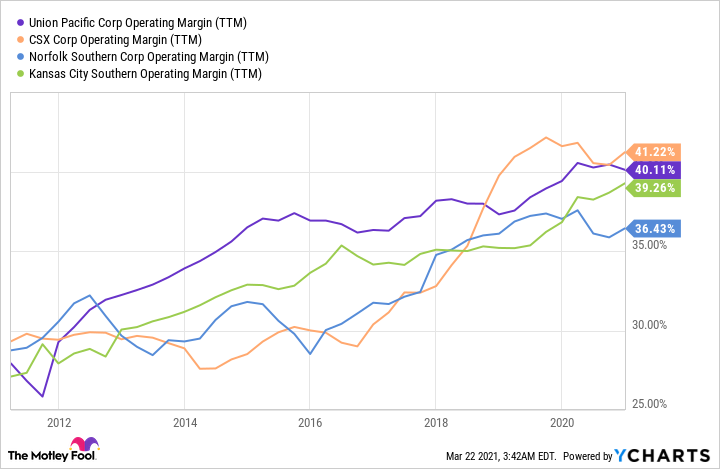 Union Pacific's PSR initiatives are obviously working as the railroad has continued to reduce its OR even as freight revenue has declined over the last year or so. 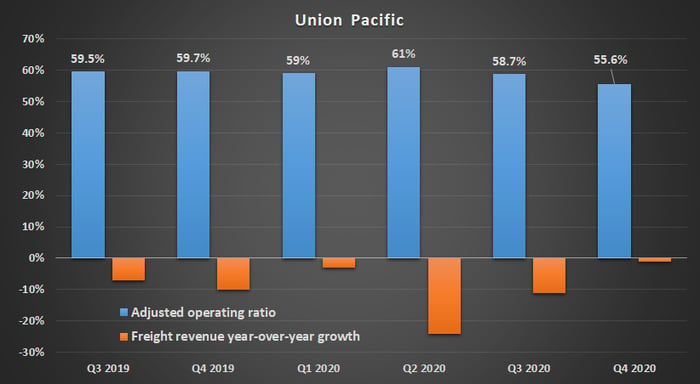 Furthermore, all the metrics PSR practitioners use to measure operational improvements, such as train length, freight car velocity, terminal "dwell," and workforce and locomotive productivity, keep improving for the railroad.

The PSR initiatives reduce the need for capital spending, and Union Pacific has significantly improved its free cash flow in recent years. That's something that will also make it easier to raise the dividend. 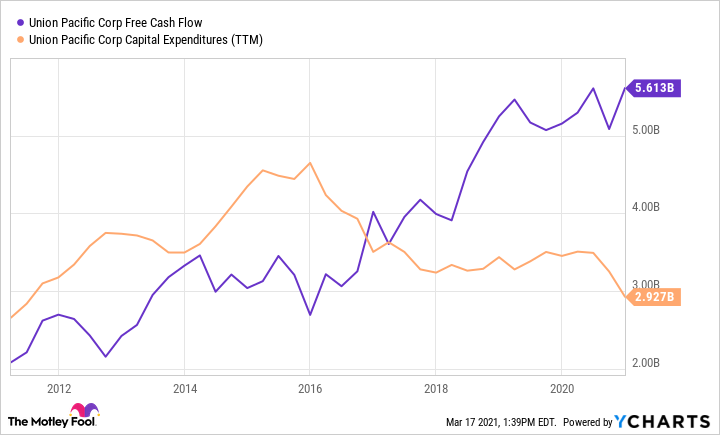 The railroads are the veins and arteries of the industrial economy in the U.S. If you believe in economic growth, you probably believe in the railroads' long-term prospects. History suggests that the U.S. economy will grow over the long term, and as long as there's a need for goods to be shipped, there will be a need for railroads. Furthermore, the railroads can grab market share from trucking due to better service levels as part of PSR improvements. For example, improving trip compliance (the percentage of freight cars arriving on time) will give customers more confidence in using railroads over trucking.

For reference, Union Pacific's intermodal freight compliance increased by 6 percentage points in 2020 over 2019 and stood at 83% in the fourth quarter. Intermodal freight is freight transported using various modes, including trucking and ship, with Union Pacific handling the rail part. Improving service levels might encourage customers to use railroads for a larger part of the journey.

Also, railroads offer clients a more environmentally friendly way to transport goods. As CEO Lance Fritz noted on the last earnings call, many customers look to use the railroad in order to "meet some of their commitments to their shareholders and stakeholders in terms of their carbon footprint."

The last few years have been wonderful for railroad stocks, but I can't help feeling that a lot of the good news on PSR has already been priced in. As such, most investors won't be excited by this stock.

On the other hand, Union Pacific is exactly the sort of stock that retirees and dividend hunters might want in their portfolio. Long-term growth prospects look assured, as does dividend growth. As such, it makes sense to buy the stock if you want a relatively safe place to park some cash and get a decent and growing dividend.