Please ensure Javascript is enabled for purposes of website accessibility
Log In Help Join The Motley Fool
Free Article Join Over 1 Million Premium Members And Get More In-Depth Stock Guidance and Research
By Harsh Chauhan - Mar 26, 2021 at 9:15AM

The high-flying chipmaker has been battered on the stock market this year, but it could soon turn around.

Advanced Micro Devices (AMD 6.58%) stock hit a 52-week high in January this year, but the price for this high-flying chipmaker has pulled back over 20% since then thanks to a variety of factors such as the broader sell-off in tech stocks and rival Intel's (INTC 3.03%) resurgence under new leadership.

However, one look at the pace of AMD's growth and its outlook for the year tells us that the recent sell-off in the stock may not be justified. The chipmaker ended 2020 on a high and expects to deliver massive growth once again this year. More importantly, investors shouldn't worry too much about the potential impact of Intel's recent announcements on AMD's fortunes just yet, as the latter has enough going for it to ward off any threat from its bigger rival. 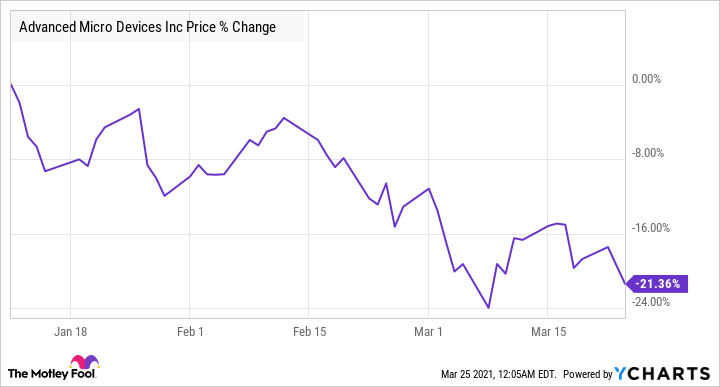 AMD chipped away substantially at Intel's dominance in PC central processing units (CPUs) and server processors last year. The chipmaker ended 2020 with a 21.7% share of the x86 processor market, which includes chips used in servers, laptops, and desktops, up from 15.1% at the end of the fourth quarter of 2019.

However, there has been chatter of Intel being on the path of a turnaround, as it had reclaimed some of its market share from AMD in the fourth quarter of 2020 on a quarter-over-quarter basis. That chatter has only become stronger as Chipzilla reportedly looks to erase AMD's technological leadership with aggressive capacity investments.

Intel recently announced a capital expenditure budget of $20 billion for 2021, a big increase over last year's $14 billion outlay, as it looks to shore up its manufacturing. The company says that the delays it faced with the 10-nanometer (nm) and 7nm chip manufacturing processes are now fixed. In fact, Intel says that its 7nm client CPUs code-named Meteor Lake are in development and will tape in the next quarter. Intel is expected to start shipping its 7nm PC chips to customers in 2023, while data center chips based on the platform are also expected in that year.

AMD has already been selling 7nm processors for quite some time now, giving it an advantage over Intel, which fumbled its transition to the competing 10nm platform and has remained stuck on the 14nm platform for a long time now. What's more, investors need not be afraid of Intel's progress on the 7nm front, as Chipzilla's timeline for the launch of those chips hasn't changed.

In fact, AMD can be expected to raise its game by the time Intel's 7nm chips hit the market by transitioning to the competing 5nm manufacturing node within the next couple of years. A smaller processing node will allow AMD to pack more transistors closer to each other, leading to improved computing performance and lower power consumption.

Therefore, AMD can remain ahead of Intel once it makes the transition to a smaller 5nm process node. Chipzilla is unlikely to regain its technology lead until the launch of its own 5nm process, the timeline for which is unknown right now. As it turns out, AMD's foundry partner Taiwan Semiconductor Manufacturing is reportedly working to increase the production capacity of 5nm chips. That should bode well for AMD, as it is expected to become TSMC's second-largest customer and enjoy stronger bargaining power.

Additionally, AMD can be expected to keep up the pressure on Intel in the data center space after the launch of its latest EPYC server processors. AMD claims that the latest EPYC 7003 processors based on the 7nm process are twice as fast as Intel's competing chips. Third-party tests conducted by AnandTech indicate the same.

More importantly, AMD has a solid lineup of clients using the latest EPYC server processors. They include Amazon, Cisco, Dell Technologies, Alphabet's Google, Microsoft, Lenovo, and Tencent. So it won't be surprising to see AMD log big gains in the data center market in both the short and the long run.

Buy when others are fearful

AMD stock has become cheaper thanks to the recent pullback, trading at 38 times trailing earnings. That's really cheap compared to last year's average trailing earnings multiple of 124, thanks to the sharp spike in the company's earnings and a lower share price. The good news is that AMD's bottom-line growth is here to stay thanks to a variety of catalysts, and it may not be long before the stock price follows suit. 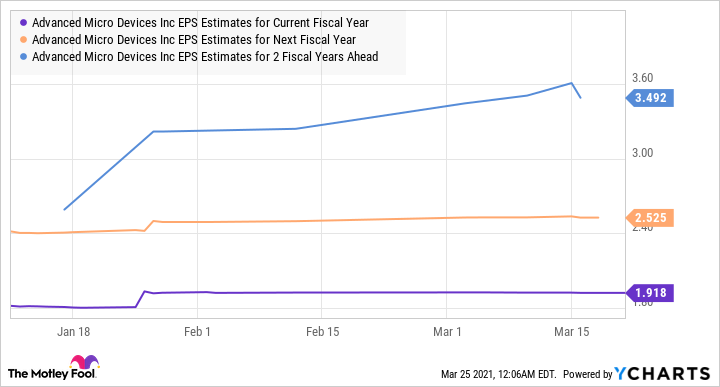 All of this makes AMD a growth stock worth buying right now, as it continues to remain in a solid position against Intel and has additional growth drivers in the bag.