Please ensure Javascript is enabled for purposes of website accessibility
Log In Help Join The Motley Fool
Free Article Join Over 1 Million Premium Members And Get More In-Depth Stock Guidance and Research
By Rich Smith - Mar 26, 2021 at 10:53AM

On Monday, the latest iteration of Elon Musk's prototype for a fully reusable rocketship completed its second "static fire" test (turning the engines on full blast to ensure they work, but keeping the rocket securely tied down so it doesn't go anywhere). With that out of the way, all systems are go for SN11 to attempt a launch -- probably sometime this weekend -- to 10 kilometers altitude, followed by a landing back at its home base.

If it succeeds, then things will start to get interesting in a hurry. 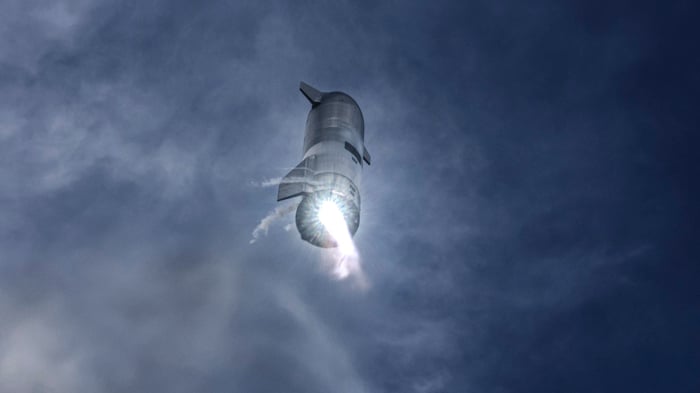 If at first you do succeed, take the win

You see, SpaceX initially thought it would take about 20 tries to work out all the kinks on the Starship before attempting an actual orbital flight of the rocket. But as NASASpaceflight.com reported last week, the successful landing of the SN10 prototype (it blew up only after landing safely) appears to have advanced SpaceX's schedule faster than you might expect -- and significantly diminished rival space companies' chances of catching up to SpaceX.

If SN11 works as planned, SpaceX intends to skip right past test flights SN12, -13, and -14, and move ahead to missions SN15, SN16, and SN17 (which will feature an upgraded design, possibly equipped with a heat shield to test the rocket's ability to reenter the atmosphere from space). Then it might skip ahead again, eschewing missions SN18 and SN19 and advancing straight to SN20.

More interesting still, SpaceX also plans to begin testing its "Super Heavy" booster, which will lift future Starships to space. The first two boosters will be designated BN1 and BN2. (SpaceX doesn't appear to anticipate as many complications with the booster, so it won't require as many test flights for it.)

And then we'll finally see SpaceX put the two parts together. As early as July 1, 2021, SpaceX will make its first orbital launch attempt with Starship. It will try to send SN20 into space atop Super Heavy booster rocket BN3 -- and then attempt to land both SN20 and BN3 back on Earth.

For those who haven't been following the SpaceX story closely, it's probably worth pointing out that SpaceX already has two working rockets -- Falcon 9 and Falcon Heavy -- each partially reusable (their first stages land back on Earth), each capable of reaching orbital speeds.

The "tanker" Starship would then refuel the "transport" Starship, giving it enough fuel to travel to the moon, or to Mars, or another destination, land there, and then lift off again and return to Earth.

Not to belabor the point, but SpaceX is making gigantic strides with Starship. Just promising a working, fully reusable spaceship program after just 20 tries was aggressive enough. But if SpaceX is really planning to skip test flights SN12, -13, -14, -18, and -19, too, then it's basically accelerated its flight test program by 25%.

And suffice it to say that this puts SpaceX way ahead of what any other space company on the planet has accomplished, or is even contemplating at this point. If SpaceX succeeds in launching a Super Heavy/Starship combo to orbit in July -- or indeed, any time this year -- the company will be so far ahead of its rivals that it's hard to imagine how anyone can compete with it on either capability or cost.

The reason: SpaceX's reusable rockets can be flown for not much more than the cost of their fuel and refurbishment. They're therefore much cheaper to launch than ordinary "expendable" rockets, which must be built from scratch for each new mission.

That being said, a word of caution: Although Elon Musk has confirmed he would like to launch an orbital mission in July, he's also warned that a final, "operational" version of this new space launch system (presumably, one fully certified as safe for human spaceflight) might not be ready until 2023.

Space companies such as United Launch Alliance, Arianespace, and Roscosmos still have a couple years to hurry and try and catch up to SpaceX -- but the clock is ticking.