Please ensure Javascript is enabled for purposes of website accessibility
Log In Help Join The Motley Fool
Free Article Join Over 1 Million Premium Members And Get More In-Depth Stock Guidance and Research
By Rich Smith - Mar 22, 2021 at 6:53AM

Space companies love SPAC IPOs -- and so do their investors.

2020 was the year of the special purpose acquisition company (SPAC) IPO -- and 2021 is probably going to be even better.

According to SPACInsider.com, no fewer than 248 SPACs filed for IPO last year, going public with the sole intent of finding a hot private company to buy and bring public in a reverse merger. Not even one full quarter into 2021, we've already seen nearly as many SPAC IPOs this year as last year.

Why are SPAC IPOs so popular?

First, they're faster to do than a traditional IPO, which can take up to six months to complete. Second, SPAC IPOs aren't subject to the same gag rules that forbid "normal" IPOs from making projections about the future. When announcing an acquisition, SPACs routinely predict gigantic revenue growth, huge profits, and addressable markets that verge on too good to be true. These pie-in-the-sky statements help to drive investor excitement -- and drive SPAC valuations to the moon. 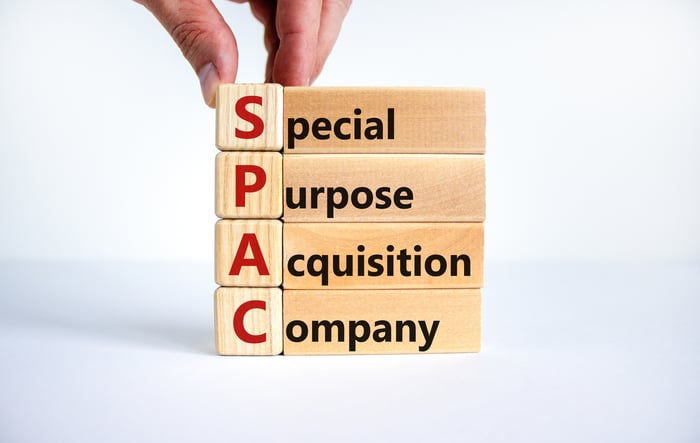 And speaking of the moon...

Such promises become even more believable when applied to brand new markets such as space, where no one's really sure how big the opportunities could get -- and even the sky seems no limit. It's no great surprise, therefore, that some of the hottest SPAC IPOs we've seen of late are of space companies racing to go public.

Here are the seven of the hottest space SPAC IPOs:

Virgin Galactic Holdings (SPCE 6.44%) started the space SPAC trend when it went public in partnership with Chamath Palihapitiya's original Social Capital Hedosophia SPAC in 2019. Virgin Galactic aims to popularize the concept of "space tourism" by flying tourists to the edge of space, six at a time and for $250,000 apiece, in a suborbital spaceplane dubbed Virgin SpaceShip Unity. Virgin is the oldest and most valuable of the space SPACs at an $8 billion market cap.

Virgin has made two successful test flights to the edge of space already, but its test program hit some hiccups after relocating to Spaceport America in New Mexico, and test flights are currently on hold until May 2021. Nevertheless, S&P Global Market Intelligence data show that most analysts on Wall Street expect Virgin stock to outperform the market over time.

Whereas Virgin Galactic's shtick is flying humans to space and bringing them back, space SPAC Holicity (HOL) wants to launch satellites into orbit and leave them there. To this end, it will bring public small rocket launcher Astra in a $2.6 billion (that's $2.1 billion enterprise value, plus $500 million in deployable cash) reverse merger IPO slated to close in the second quarter of 2021.

Astra first reached space in December 2020, sending a "Rocket 3.2" launch vehicle on a 236 mile arc. The rocket fell just short of reaching orbital velocity, however, and fell back out of orbit -- but with 50 customers having reserved future launches on its rockets, Astra is bound to try again soon.

The latest space SPAC IPO to hit the market is Vector Acquisition (VACQ), which announced earlier this month that it will bring public small rocket launcher Rocket Lab in Q2 2021. With an anticipated post-IPO market capitalization of $4.9 billion ($4.1 billion enterprise value, $750 million cash), Vector Acquisition's Rocket Lab IPO would make it the second biggest pure-play space company on the market.

And maybe it deserves to be. After all, Rocket Lab has already conducted 16 successful rocket launches, putting 97 payloads in orbit -- and keeping them there. Next to SpaceX, it's arguably the most successful privately owned space launch company. And Rocket Lab has ambitions to become the only company with a reusable rocket aside from SpaceX, as it designs a new medium-lift "Neutron" rocket in addition to its workhorse, Electron.

Stable Road Acquisition (SRAC) is our next hot space IPO. In "early 2021," it aims to acquire and IPO "space tug" company Momentus, which has partnered with SpaceX to help push small satellites, carried to space by Falcon 9 rockets, into their proper orbits. The company has yet to launch its first tug, however, and in January, its first launch was delayed pending approval from the Federal Aviation Administration (FAA).

Shifting our focus from spaceships to satellites, NavSight Holdings (NSH) announced this month that it will acquire and bring public Earth-observation satellite company Spire Global. Spire operates a proprietary constellation of 100 satellites, collecting, analyzing, and selling the data it collects to governments and customers in the weather, aviation, and maritime industries.

Similarly, Osprey Technology Acquisition (SFTW) will bring public satellite company BlackSky in July 2021. BlackSky offers "real-time geospatial intelligence, imagery, and data analytics" services through a constellation of five satellites, and claims to have a $1.7 billion "pipeline of opportunities" ahead of it. To capitalize on these opportunities, BlackSky will launch nine more satellites this year and ultimately build a constellation of "30 high resolution multi-spectral satellites capable of monitoring locations on Earth every 30 minutes, day or night."

Osprey targets a $1.5 billion valuation on BlackSky, comprising about $1 billion in enterprise value, and $475 million cash.

Finally, New Providence Acquisition (NPA) -- about which I wrote in January -- seeks to acquire and IPO AST SpaceMobile, "the first and only space-based cellular broadband network accessible directly by standard mobile phones." SpaceMobile doesn't currently have any satellites for this network to run on, but hopes to have 110 of them in orbit "by the end of 2023 or early in 2024."

In the meantime, New Providence will be voting to approve its merger with AST SpaceMobile on April 1, and plans to complete the merger on June 15, 2021. Upon coming public, AST SpaceMobile should command about a $1.9 billion market capitalization -- $1.4 billion in enterprise value and up to $462 million cash.