Up until about 2018, if you wanted to invest in space, you really only needed to know a few names: United Launch Alliance (the joint venture between Boeing and Lockheed Martin), Northrop Grumman (which became a space company by buying Orbital ATK), and rocket engine-maker Aerojet Rocketdyne were the big three names in space. Widen the lens a bit, and you might also consider stocks such as satellite communications company Iridium or Earth-imaging company Maxar Technologies.

After 2018, though, the industry really began opening up.

In 2019, Virgin Galactic (NYSE:SPCE) became the first pure-play space company to IPO in years, and the first-ever human spaceflight company to IPO via "special purpose acquisition company" (SPAC). A year later, 2020 brought rumors of an impending IPO by SpaceX's satellite internet subsidiary Starlink, and confirmed plans by the Stable Road (NASDAQ:SRAC) SPAC to bring space tug company Momentus public. And before the year was quite over, we got even more news:

A third SPAC-sponsored IPO is in the works. Sometime in the next three months, New Providence Acquisition Corp. (NASDAQ:NPA) will acquire and IPO AST SpaceMobile as a publicly traded stock. Passing the 62-mile-high Karman line, it will join Virgin Galactic and Momentus ... in space. 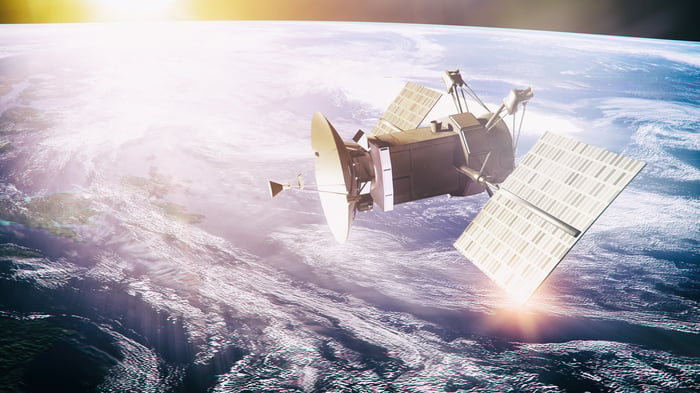 Who the heck is AST SpaceMobile?

For that matter, who the heck is New Providence Acquisition Corp? Well, according to S&P Global Market Intelligence, NPA is a company without "significant operations" of its own. But NPA announced on Dec. 16 that it will use AST SpaceMobile (officially known as "AST & Science LLC") to create "the first and only space-based cellular broadband network accessible directly by standard mobile phones."

And yet, questions abound.

AST SpaceMobile predicts that, immediately upon going public as Nasdaq ticker symbol ASTS later this quarter, it will assume a "post-transaction enterprise value of $1.4 billion." That sounds like an incredible return for folks who own NPA, whose stock currently sells for less than $400 million -- about a 275% profit in under three months -- which explains why investors have bid NPA stock up 39% in the last two weeks, aiming to get in on the action.

And yet, despite its big numbers, SpaceMobile's plan seems painfully short of specifics. What "space assets," specifically, does it intend to "deploy", for example? Who will build these assets, when will they launch, and who will launch them?

According to the company's website, "the technology is highly proprietary, and exactly how it works cannot be disclosed." And as for when it will arrive, all management will say is that it will happen in "the next few years."

But that doesn't give SpaceMobile a whole lot of leeway to keep its promise of delivering "operating cash flow positive" numbers "in 2023" (i.e. two years from now) or "approximately $1 billion" earnings before interest, taxes, depreciation, and amortization by 2024. To keep its promises, just three short years after its IPO SpaceMobile has to go all the way from starting "phase one of the commercial launch of SpaceMobile's space assets" to generating cash and reporting profits -- which will be tough to do if assets won't even begin launching until a "few years" from now.

Does this mean that AST SpaceMobile is destined to fail? I wouldn't go quite that far. A successful IPO could generate enough cash to keep a newly public SpaceMobile in business for years, even if it never makes a profit. But investors should be aware that the "unique [and] an extraordinary market opportunity" that SpaceMobile and NPA are offering investors here is far from a sure thing -- and the same goes for management's "predicted post-transaction enterprise value of $1.4 billion."

Personally, until I'm convinced there's a real product behind all the marketing hype, I'm going to stay very far away from this particular space IPO.