As the aerospace giant emerges from a tumultuous two-year period, here are some signs that this could be a turning point.

Boeing's (BA 2.23%) valuation peaked in March 2019, after two fatal crashes yanked its 737 MAX planes from the market. Canceled orders and costly fixes to the MAX's faulty systems and software forced the company into a large amount of debt, further fueling investors' fears. But now, monthly order data shows customers are coming back, an early sign that Boeing could be turning a corner. 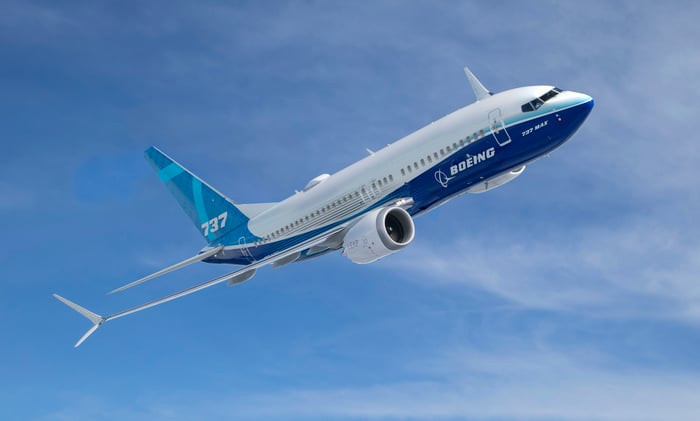 The Boeing 737 MAX is returning to the skies. Image source: Boeing.

Since the 737 is Boeing's highest-volume aircraft, the grounding caused a significant collapse in total new orders in 2019. However, orders didn't just fall for this model; the troubles scared customers away from Boeing in general, bringing numbers down in every single category versus the prior year. But with the MAX out of the woods and the pandemic slowly but surely resolving, the company can begin to look forward to a return to earnings growth.

Boeing's customers have returned in the early part of 2021, helping shift the order book to positive territory in February for the first time since November of 2019. New orders this year suggest that customers are more receptive to purchasing the 737, given how much attention this crisis has received. Remember, the MAX's failures didn't just spur Boeing to revamp its internal procedures. They also transformed the FAA, with new bipartisan laws improving its process for certifying new planes.

Boeing's reputation is undoubtedly damaged. But from the perspective of an airline, if the 737 MAX isn't safe now, no plane is.

The company's rocky journey is best summed up through the table below:

It's clear that 2021 is shaping up to eclipse the last two years in net new orders; Boeing's already exceeding 50% of its 2019 figure just two months in. The company needs to get back to pre-2019 customer order levels to increase manufacturing capacity and return to 2018 levels of profitability.

Looking at the most recent February data, customers placed gross orders for almost four times more 737s compared to the closest competitor, the Airbus A320 -- 39 of the 737 versus 10 of the A320. Watch this trend over time to see whether Boeing is taking back some of the market share lost while the aircraft was grounded.

That's a lot of debt!

The company's $63.5 billion in total debt may worry investors, but that face-value sum doesn't honestly represent the company's financial position.

At the end of 2019, Boeing had $27 billion in debt, so that sum has grown about 135% since. Despite that staggering growth rate, it's important to remember the 737 MAX crisis and the pandemic were (hopefully) one-off events. Expect growth in Boeing's debt position to grind nearly to a halt over the next few years.

With $25 billion in cash, equivalents, and short-term investments, Boeing has an attractive cash runway that could guide it back to profitability. At a combined interest rate of 5%, the company can easily cover its $3 billion in annual interest expenses. Boeing did generate scarily negative free cash flow of -$19 billion in 2020, but with the 737 MAX once again approved to fly, this year's free cash flow seems likely to land somewhere between 2018's $13 billion and 2019's -$3 billion -- a vast improvement.

Approximately $36.5 billion in debt, or 57% of Boeing's total, is due through the years 2059 and 2060. That's really long-term debt, providing the company with ample flexibility to operate the business.

Boeing is a public company with a current valuation of $140 billion, and if it runs into further turbulence, it can always sell new shares or issue debt to raise cash. Even in 2020, when the company probably couldn't have been more stressed, investors showed a huge appetite for its debt. Boeing sought to raise $10 billion but was met with $75 billion in demand, according to a Reuters report.

This is why debt, for the time being, is a non-issue. Investors should focus instead on continued order growth. Boeing shares are down about 45% since their 2019, pre-737 grounding highs, which is probably appropriate given the company's 2020 numbers. However, provided these issues are truly behind it, Boeing seems likely to return to near-2018 levels of profitability over the next few years. If that proves true, the stock could provide excellent value for long-term investors.