Please ensure Javascript is enabled for purposes of website accessibility
Log In Help Join The Motley Fool
Free Article Join Over 1 Million Premium Members And Get More In-Depth Stock Guidance and Research
By James Brumley - Mar 27, 2021 at 6:57AM

Though most people reinvest dividend payments from blue chips, you can use them to live on while still growing your principal.

A slew of Americans recently received stimulus checks, using them to pay bills, buy stuff, or simply stash away for a rainy day. But alas, those $1,400 payments are likely the last stimulus checks the government is going to issue for a while. From this point forward, U.S. citizens are back to financially fending for themselves.

If you have some idle money in your brokerage account, though, you can arrange for your own recurring cash stimulus for the indefinite future -- in the form of dividend payments. If you plan carefully, you can even schedule these payments to be made every month of the year, even though most dividends are paid quarterly. Best of all, you don't have to sacrifice growth to produce regular income.

With that as the backdrop, here are three Dow stocks that are not only strong companies with nice dividend profiles, but also make their payments in completely different months of the year. 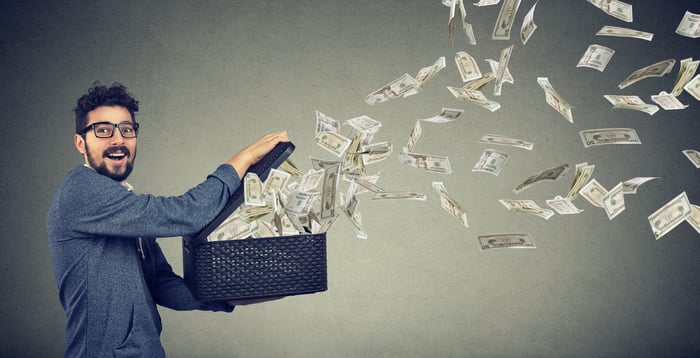 Coca-Cola (KO 0.53%) doesn't need much of an introduction. It's the world's most recognizable beverage brand, leveraging not just its soda reach, but also its other brands like Gold Peak tea, Dasani water, and Minute Maid juices. It's the perfect business for driving dividend payments. Consumers might skip a vacation or postpone the purchase of a new car, but they don't think twice about buying the same drinks over and over again.

And Coca-Cola's making good on its promise as a cash cow. Not only is its dividend-payment streak uninterrupted for decades, but it has also raised its payout every year for the past 59 years.

Those investors keeping tabs on Coca-Cola from a distance may have noticed revenue has been steadily shrinking since 2014, calling into question its capacity to keep paying its dividend. Take a closer look, though: This is by design. The company has been slowly getting out of the bottling business so it can focus more closely on its higher-margin licensing and franchising operation.

It's working, too. While its top line has been fading for years, its bottom line has been steadily improving since 2018 (except for the temporary headwind caused by the pandemic).

More importantly, when not dealing with the impact of a global contagion, the company isn't straining to make its payments. Its 2019 per-share profits of $2.07 were still more than enough to cover that year's dividend payouts of $1.68 per share.

Telecom giant Verizon Communications (VZ 1.44%) may not be the Dividend King that Coca-Cola is, but with 14 consecutive years of dividend increases under its belt, it's en route to that 25-year milestone. And like Coca-Cola, dishing out dividend payments isn't a problem. The company's 2020 earnings of $4.30 per share easily covered last year's total payout of $2.48, leaving behind more than enough to invest in growth.

And that leftover cash has been and continues to be deployed wisely.

See, while most telecom service providers are making investments in 5G connectivity, none seem as ready as Verizon to capitalize on the movement, which is already worth hundreds of billions of dollars per year and still growing.

Mordor Intelligence estimates the annual 5G services market is going to grow at a triple-digit pace through 2026, when it exceeds $400 billion, as telecom and technology players not only see their 5G plans come to fruition, but also figure out new products and services to utilize these speeds. Chief among these evolutions will be the onset of the Internet of Things, wireless at-home broadband, and data-intense applications like virtual reality and connected cars.

Verizon isn't just providing wireless broadband infrastructure, either. It's pre-solving the specific challenges consumers and corporations are apt to face with 5G. For instance, its 5G Edge solution is offered with remote "edge" computing in mind where many companies now want data-handling to happen. It's also helping companies build their own private 5G networks.

These developments translate into a long runway for revenue and earnings growth for Verizon.

Finally, add biopharma Amgen (AMGN 0.38%) to your list of Dow stocks that can drive year-round monthly stimulus payments for you, taking the final slots in the calendar's three-month cycle.

Investing in biopharma stocks like Amgen can feel a bit daunting. It's a fast-changing business, and every one of these companies faces the constant risk of a competitor's drug undermining established sales.

But Amgen isn't quite as speculative as some investors might think.

For starters, it sells more than 20 different drugs, only one of which accounts for as much as 20% of its total revenue. Beyond that one, no single drug accounts for more than 12% of sales. On average, each drug provides around 5% of its total top line. Point being, Amgen has lots of diversity built into its drug lineup even if a couple of them qualify as so-called blockbusters.

The other key differentiator between Amgen and your typical biotech stock is the diversity and depth of its development pipeline. It has on the order of 50 trials underway at this time, exploring uses for roughly 40 existing or brand new drugs. Not all of them will win regulatory approval, of course, but not all of them have to.

Sure, Amgen shares are never going to be catapulted higher on a big therapeutic breakthrough. It just doesn't matter. With its size and current portfolio, it's a cash machine that not only can afford to pay its dividend, but also is capable of outright acquiring new revenue-bearing drug prospects.

3 Dividend Stocks Should Thrive in a Recession