Please ensure Javascript is enabled for purposes of website accessibility
Log In Help Join The Motley Fool
Free Article Join Over 1 Million Premium Members And Get More In-Depth Stock Guidance and Research
By Jeremy Bowman - Mar 29, 2021 at 10:45AM

The sale of its publishing division had investors cheering.

As a result, HMH stock was up 24.6% as of 9:56 a.m. EDT this morning, while News Corp shares were virtually unchanged. 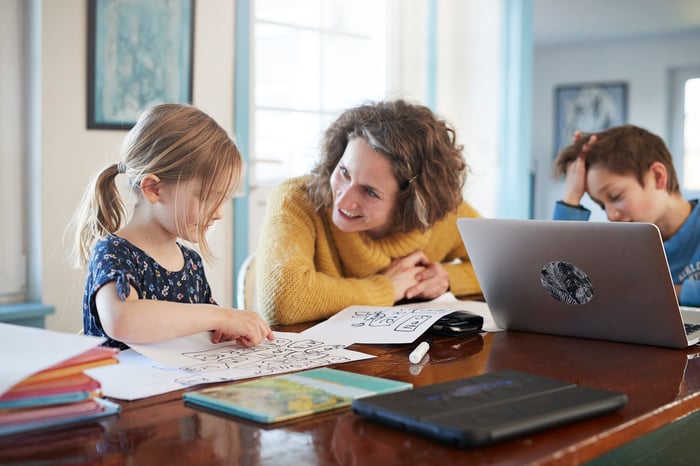 HMH said the deal would allow it to focus exclusively on K-12 education, where it sees an opportunity to accelerate growth and build annual recurring revenue through digital initiatives. It also said the sale of the HMH Books & Media division would enable it to pay down a significant portion of its debt; it finished 2020 with $644 million in debt, or close to double the $349 million sale price. That sale price accounted for about half of HMH's market cap before today's gain, showing it's a significant piece of its business.

HMH's publishing arm owns a number of high-profile titles, including Lord of the Rings, iconic children's books like Curious George, and video and interactive media including Carmen Sandiego. News Corp is controlled by media mogul Rupert Murdoch, who has sharpened his focus on legacy media assets following the sale of Fox Corporation's entertainment assets to Walt Disney in 2019.

HMH CEO Jack Lynch explained the decision, saying, "The divestiture of the HMH Books & Media business allows us to deepen our focus on K­­­–12 education, while also providing our talented consumer publishing colleagues and authors with infrastructure and support to fuel continued growth, champion new stories and continue this legacy."

With the sale, HMH is aiming to streamline itself with a software-as-a-service model, and the company said in its fourth-quarter earnings report that SaaS billings jumped 142% and usage was up 306% even as overall revenue was down. The remote schooling environment caused by the COVID-19 pandemic may have helped drive that growth.

Nonetheless, the sale of the publishing division is a smart move and should allow the company to receive a higher valuation from the market, especially as it can now pay down the bulk of its debt. The stock plunged by about 75% at the beginning of the pandemic, but it has now recouped all of those losses, showing investor confidence in the digital transformation strategy.

Why Houghton Mifflin Harcourt Stock Was Up Again on Friday