Please ensure Javascript is enabled for purposes of website accessibility
Log In Help Join The Motley Fool
Free Article Join Over 1 Million Premium Members And Get More In-Depth Stock Guidance and Research
By Jason Hawthorne - Mar 30, 2021 at 7:17AM

The companies are winning thanks to big changes in spending habits.

Although investing is about identifying companies that will succeed in the future, no one has a crystal ball. It's especially difficult to anticipate what will happen in a post-pandemic world, when so much has changed over the past year. However, a few new behaviors have been established that promise to change how consumers spend money for years to come. That visibility could give investors a leg up in picking winners whenever (hopefully!) things get back to normal.

LCI Industries (LCII 0.41%), Marine Max (HZO 4.18%), and Chewy (CHWY 5.58%) all had an eventful 2020 and are capitalizing on the trends that took hold during the pandemic. The new spending habits may continue far longer than Wall Street is expecting, and that's a recipe for great investment returns if the trends hold. 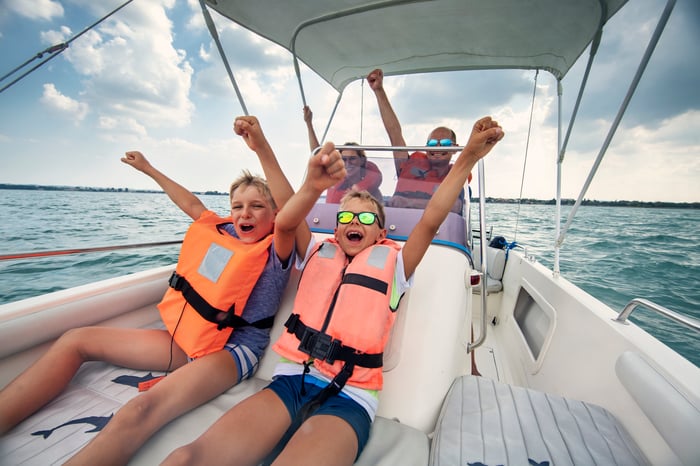 One thing the pandemic has accomplished is getting people outdoors. Industrywide wholesale RV shipments were the fourth-highest on record at 430,000 units last year, and sales of boats and related products jumped to a 13-year high. The trends don't show any signs of slowing. LCI recently gave analysts some insight when it shared January sales figures that were 38% higher than 2020. The view was validated when Camping World Holdings (CWH 2.27%) raised its estimate of sales for the current year and Winnebago (WGO 1.41%) commented on sustained stronger profitability.

People are getting outside more during the pandemic, and one way they are doing it is via recreational vehicles. For investors, the message couldn't be clearer from those in the industry. The elevated sales and profits aren't fading anytime soon. That should benefit shareholders of LCI even longer, as the demand for both new vehicles and replacement parts fuels growth.

The desire to get outdoors benefited the nation's leading boat and yacht dealer as well. Many people are just discovering the fun of spending time on the water with their family.  MarineMax reported sales of $1.5 billion when its fiscal year ended in September, representing 22% growth over the previous year. It followed up that impressive performance with a 35% jump in sales for the quarter ending Dec. 31, more than doubling net income from the same period in 2019. CEO William McGill commented on how the introduction of new boaters and eye-popping growth in sales will benefit shareholders over the coming decade.

For one, new boaters are likely to eventually upgrade. Similar to autos, a first-time buyer will likely be a lifelong customer of a given manufacturer. Even used boats generate revenue in one of the company's 30 marinas and 8,000 boat slips worldwide. MarineMax also offers services that generate high-margin sales such as digital apps, parts and service, as well as insurance and financing. Similar to the increased interest in RVs, the pandemic has changed peoples' behavior when it comes to getting on the water. With MarineMax having strong sales and many ways to profit from boat ownership, investors looking to invest in a post-pandemic world might want to add MarineMax to their buy list.

One way Americans forced to stay home during the pandemic curbed the isolation was by adding pets to their families. Adoption rates have increased about 15% since the pandemic began, and that's boosted spending on food, toys, and medicines for our furry friends. In January, veterinary health company Zoetis (ZTS 1.76%) said internet spending from their customers was up 70%. That's the sweet spot for online pet store Chewy. The company will report earnings on March 30, but it reported sales up 45% for the quarter ending in October. Revenue grew at the same pace for the preceding 39 weeks. All told, the trailing 12 months saw the company generate $6.5 billion in revenue. Management is taking bold steps to expand the business as demand ramps up.

The company launched two service-based businesses last year. The first was medication compounding. This service is offered through the Chewy pharmacy for individual pets who need custom medications. The company will soon make the service available to vets. That Chewy pharmacy business is expected to produce $500 million in gross sales for fiscal 2021, making it the largest online pet pharmacy only two years after launching. The second business is a veterinary telehealth platform. Management admits it is in the early stages but learning a lot. Another company innovation is private-label brands. Similar to Whole Foods' 365 or Costco's Kirkland, when customers buy these products the company keeps more profit. Management expects the in-house labels to ultimately make up 15% to 30% of sales, eventually boosting gross margins as much as 10%.

With Americans adopting pets at a record pace and doing more business online than ever before, Chewy has two very powerful tailwinds fueling growth. The average pet lives more than a decade. That means investors thinking about how to profit in a post-pandemic world can expect Chewy to still be benefiting from COVID-19 shutdowns in 2030 and beyond.