Please ensure Javascript is enabled for purposes of website accessibility
Log In Help Join The Motley Fool
Free Article Join Over 1 Million Premium Members And Get More In-Depth Stock Guidance and Research
By Trevor Jennewine - Apr 1, 2021 at 8:51AM

Last year, the pandemic disrupted life in a big way, forcing business closures and social distancing measures. That certainly had a financial impact on consumers' lives, but there were social repercussions as well. For instance, dating became much more difficult.

However, according to The Wall Street Journal, the largest U.S. dating apps saw a 12.6% increase in monthly active users in the final quarter of 2020. That trend bodes well for Match Group (MTCH 2.20%), the largest player in the online dating space. But where will this tech company be in five years?

Match Group owns an extensive portfolio of dating products, all designed to help consumers find meaningful connections, whether that means casual dating or a serious relationship. While dating is the common theme, each of its apps is targeted at a slightly different population. 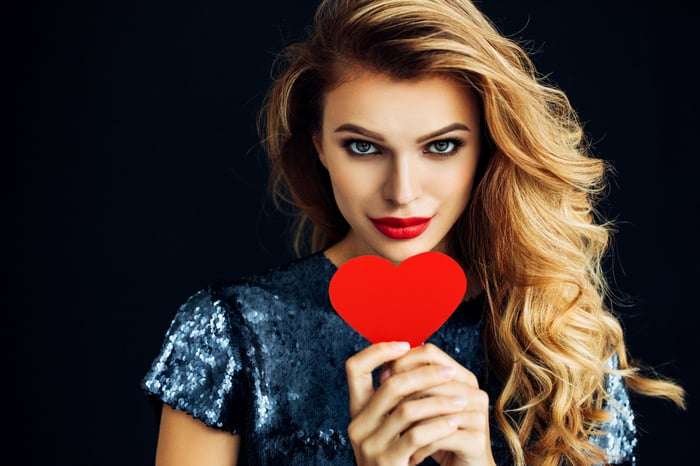 For instance, Tinder and Hinge have seen high adoption from millennials and younger users, while Match is more popular with individuals over the age of 35. Additionally, OurTime has more singles over 50 years old than any other dating app, and Pairs was developed to drive growth in East Asian countries like Japan.

Over the last decade, the rising popularity of online dating has been highlighted in various reports. For instance, Stanford sociologist Michael Rosenfeld published a study in 2019 indicating that 39% of heterosexual American adults met their partner online, up from 22% in 2009. His research was cited in a paper by Tyro Partners, which links the rise in online dating to increased smartphone adoption.

Going forward, the online dating market is expected to grow 9% annually, reaching $4.2 billion by 2024, according to Statista. Despite that growth, user penetration will reach only 5.7% over that time. That leaves plenty of room for Match Group to add new subscribers and grow its business.

Match Group is the clear market leader in the online dating space. In the United States, the company owns six of the top 10 dating apps by revenue. Moreover, Tinder alone has achieved 40% market share in terms of U.S. sales, and it was the top-grossing non-gaming app worldwide in 2020.

That gives Match Group a significant advantage over its primary rival Bumble, which went public earlier in 2021 and currently has a 19% market share. However, Bumble is gaining ground, and its market presence has nearly doubled since 2017.

Despite pandemic-related headwinds in 2020, Match Group still turned in a respectable financial performance. Total revenue was up 17%, powered by 12% growth in its subscriber base. Notably, the majority of new subscribers came from international markets. If that trend continues, it could be a powerful growth driver for Match Group in the years ahead.

Going further back, the company's financial performance has been even more impressive over the last three years.

In the coming quarters, investors should watch Match Group's ability to grow and monetize its subscriber base. To that end, the company plans to fully launch Tinder Platinum in the near term, though a specific date has not yet been set. Even so, based on CEO Shar Dubey's comments during the most recent earnings call, the company believes this new product will drive an increase in the average revenue per user, which should make Match Group more profitable. That's good news for shareholders.

Investors should pay attention to the rivalry between Match Group and Bumble. While the online dating market is big enough to support multiple winners, Bumble's success would certainly cut into Match Group's top line, slowing the company's growth.

That being said, this tech company still looks like a good place to invest your money. Over the last five years, Match Group has significantly outperformed the broad market with shares surging over 900% compared to the 91% gain of the S&P 500. Given the company's strong history, solid competitive position, and the rising popularity of online dating, this stock should continue to beat the market over the next five years.