Please ensure Javascript is enabled for purposes of website accessibility
Log In Help Join The Motley Fool
Free Article Join Over 1 Million Premium Members And Get More In-Depth Stock Guidance and Research
By Will Healy - Apr 2, 2021 at 8:41AM

AMD will not take competitor gains lying down.

Advanced Micro Devices (AMD -5.99%) stock now faces something it has not seen in years: a considerable decline. Recent moves by NVIDIA (NVDA -5.84%) and Intel (INTC -2.67%) have caused uncertainty among stock investors, taking AMD into bear-market territory. Still, amid counterpunches from key peers, the drop in AMD may have given investors in this chip stock the best buying opportunity in years.

AMD has spent years riding high under the leadership of CEO Lisa Su. Su took a near-bankrupt company and made it competitive against NVIDIA in the graphics processing unit (GPU) market. AMD's GPU market share rose as high as 19% in 2020, according to Jon Peddie Research.

Su also capitalized on turmoil at Intel and took a technical lead in central processing units (CPUs). AMD continues to market 7nm processors as Intel continues to delay the release of a comparable chip.

However, in recent weeks, AMD stock has fallen as its rivals counterpunched. Intel appointed Patrick Gelsinger as CEO. He previously served as Intel's chief technology officer and helped design the original 80486 processor. With that experience, he brings an engineer's mindset to the CEO job, seeking to revive the company's foundries and reclaim the lead Intel held over AMD for decades. 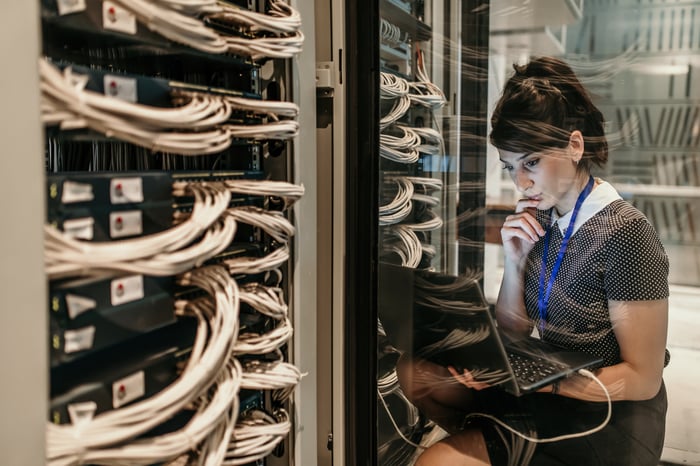 Intel already generates about eight times as much revenue as AMD. Considering this move, Intel's current P/E ratio of 13 looks appealing compared with AMD, which trades at 37 times earnings.

AMD still looks cheap compared with NVIDIA's multiple above 75. Still, NVIDIA has acquired Mellanox to boost its competitive advantage in the data center space. GPU-powered data centers can deliver improved performance for both computational and graphics workloads. Hence, this could potentially become a lucrative niche for NVIDIA.

Moreover, NVIDIA made competitive strides against AMD late in the year. AMD's market share for GPUs now stands at 17%, down from 19% last summer. Additionally, NVIDIA retained its contract with Nintendo to provide the processor for the Switch game console. Though Sony's PlayStation and Microsoft's Xbox run on AMD processors, NVIDIA will still retain some of the game console market.

Consequently, investors have soured on AMD's stock. Not only has its P/E ratio reached multiyear lows, but the stock price has also lost just over 15% of its value since it hit an all-time high in January. While a 5% decline in the Nasdaq explains part of that drop, the counterattacks have also taken a toll. 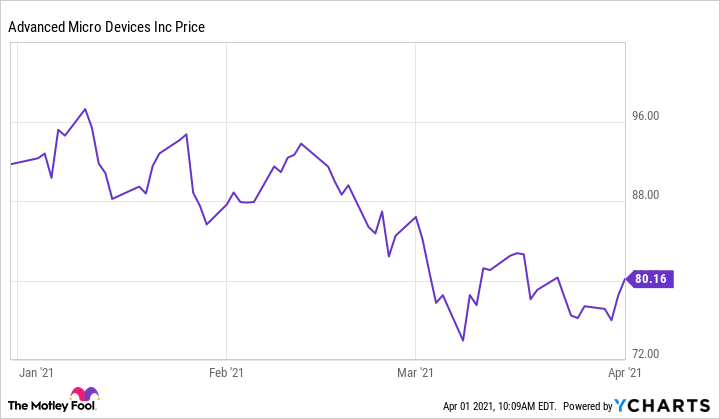 But AMD is far from down and hardly out

However, investors should not assume that AMD does not pack counterpunches of its own. It retains a close relationship with its chip producer, Taiwan Semiconductor, which maintains a technical lead over Intel's foundries. Thus, as Intel finally releases a 7nm chip, AMD could introduce a 5nm alternative in the near future.

AMD also plans to continue challenging both Intel and NVIDIA in the data center market. On March 15, Su unveiled the EPYC 7003 series of processors, which the company calls the "world's highest-performing server processor."

AMD claims its EPYC chips beat Intel's server processors on numerous performance metrics such as database and high-performance computing. Admittedly, those numbers come from AMD instead of an independent third party.

As of the fourth quarter of 2020, AMD holds only 7% of the market, according to Mercury Research. Still, AMD made huge strides in one year, considering the 4.5% of the market it claimed in Q4 2019. This latest release could lead to it taking further market share from Intel.

In the game console market, AMD also sits in a comfortable position. Both Microsoft and Sony released their latest generation of game consoles late last year. Demand has reached such high levels that consoles are out of stock. Hence, this should remain a lucrative book of business for AMD as Sony and Microsoft work to supply the market.

Furthermore, AMD's aforementioned 37 P/E ratio is its lowest multiple in nearly 10 years. Moreover, the company more than doubled its profits in 2020, yet the valuation has fallen to its lowest level since Su returned the company to profitability.

While AMD did not issue a forecast for net income for 2021, the predicted revenue growth of 37% comes in only slightly below the 2020 revenue growth rate of 45%. Additionally, since Intel continues to produce single-digit growth numbers, AMD stock could retain its appeal to investors despite Intel's P/E ratio of 13.

The state of AMD stock

Given the market share gains that have driven AMD, investors could not realistically expect Intel and NVIDIA not to fight back. Nonetheless, while these competitive strides rightly serve as a wake-up call to AMD investors, the sell-off in AMD stock appears overdone.

AMD still appears competitive in the GPU field and in gaming, and Intel has not yet threatened AMD's lead in the CPU market. With a multiple under 40 and AMD preparing to log an additional revenue gain of 37% in 2021, investors should consider buying the dip in AMD stock rather than treating the price drop as a reason to run.