Please ensure Javascript is enabled for purposes of website accessibility
Log In Help Join The Motley Fool
Free Article Join Over 1 Million Premium Members And Get More In-Depth Stock Guidance and Research
By Jason Hawthorne - Apr 3, 2021 at 6:45AM

Another vaccine from the company's recent past may hint at what's next.

When the University of Oxford developed a vaccine for COVID-19, it needed to find a partner to handle the manufacturing and distribution. It turned to fellow U.K. firm AstraZeneca (AZN -0.17%) for the task.

With the vaccine now under scrutiny after reports of a rare clotting side effect, it's worth looking back on a previous vaccine the company developed, its struggles, and how that situation might help predict what could happen next. 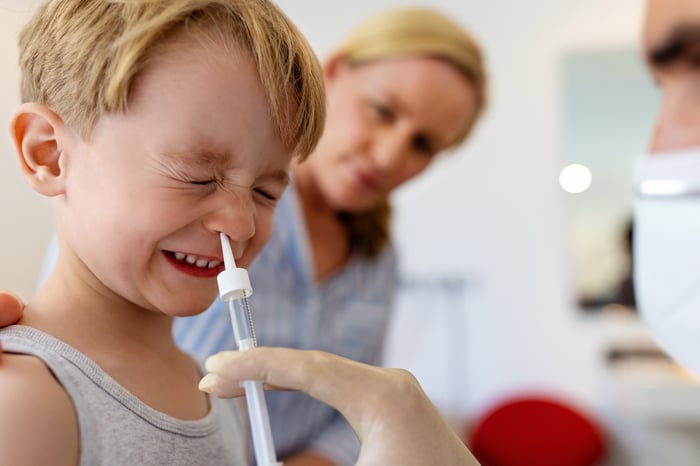 Questions about a vaccine then

In 2003, the U.S. Food and Drug Administration (FDA) approved FluMist, a vaccine nasal spray manufactured by MedImmune for people aged five to 49. After purchasing the company in 2007, AstraZeneca oversaw the approval of its quadrivalent enhancement in 2012, an upgrade that protects against two strains each of both influenza A and influenza B. The Centers for Disease Control and Prevention's (CDC) Advisory Committee on Immunization Practices advised the drug not be used in 2016 after real-world data showed there was virtually no benefit for children ages two to 17.

Then, as now, the company was scrambling to offer its own data and counter the argument that its vaccine didn't provide the benefits it claimed. Back then, it determined FluMist's lack of effectiveness could be linked to a vaccine component. AstraZeneca replaced it and came back to the CDC two years later, prompting the agency to once again list the nasal spray among the vaccines available to doctors. For the company's COVID-19 vaccine, however, the fix might not be that simple.

Questions about a vaccine now

At one time last year, AstraZeneca and its partner were leading the race to a COVID-19 vaccine. After receiving approval in the U.K. and Europe in December, the drug is still waiting for the green light here in the U.S. Although clinical studies didn't identify any safety issues, five of the 11 million people who have been inoculated in the U.K. have developed an extremely rare condition called cerebral sinus vein thrombosis. The European Medicines Agency lists 37 reports of the condition so far. Countries throughout Europe have either suspended administration or recommended young people not get the medicine, citing the unusually high percentage that have developed the condition or even died.

In a startling break from tradition, the National Institute of Allergy and Infectious Disease in the U.S. penned an open letter accusing AstraZeneca of using outdated numbers when it claimed its vaccine had 79% efficacy. Recall that the original reports came from two different groups of clinical trial participants, one that had two full doses and one that had inadvertently been given an initial half dose. Add it all up and it hasn't inspired much confidence at home or abroad.

What the FluMist situation teaches us

There are two questions that AstraZeneca needs to answer to get its COVID-19 vaccine back in the good graces of regulatory agencies and public opinion. They are the same two questions CEO Pascal Soriot was able to answer when the popular flu vaccine faced its U.S. hurdles in 2015.

To start, management needs to be able to say whether there is a problem or not, and what is causing it. Separately, researchers in Germany and Norway believe they might have found an autoimmune reaction causing the side effects. Most importantly, they suggested a possible treatment. That's the second question that has to be answered. If there is a problem, how can it be mitigated?

For AstraZeneca shareholders, the agreement to supply the drug without profit during the pandemic has already cost the company around $20 billion. If the skepticism persists, it may never realize the windfall that should have come from producing the drug. If the company can confirm the issue and propose a potential solution, its global vaccination plans can get back on track. That process took two years for FluMist. Management is going to need to pull off a similar feat much faster this time if investors are going to benefit.