The software stock trades off roughly 70% from its 52-week high.

Shares of BlackBerry (BB -2.00%) dipped 18.1% in March, according to data from S&P Global Market Intelligence. The stock had made big gains early in the year thanks to short-squeeze momentum, but the company's valuation slid last month due to weaker-than-expected quarterly results and widespread sell-offs for growth-dependent tech companies.

BlackBerry published its fourth quarter results on March 30, and the report was a dud on multiple fronts. Sales fell roughly 25% year over year to come in at $215 million on a non-GAAP (adjusted) basis, while the average analyst estimate had called for revenue of $245 million in the period. The company's adjusted earnings per share came in at $0.03, which was in line with expectations, but its GAAP loss of $0.56 per share was much worse than the $0.03 per share target suggested by the average analyst estimate. BlackBerry attributed some of its big fourth quarter revenue miss to its pursuit of a partial sale of its mobile devices, messaging, and wireless networking patent businesses to an unnamed company based in North America. BlackBerry stated that the sale initiative led it to ease up on sales and marketing activities that might have otherwise driven revenue higher in the quarter, but the results were disappointing no matter how you slice it, and it's not surprising that the market bristled at the performance.

BlackBerry stock has made some gains early in April's trading. The company's share price climbed roughly 2.6% in the month's first day of trading. 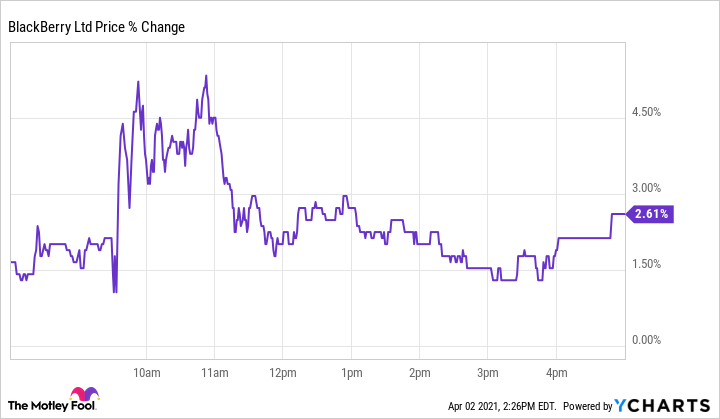 BlackBerry expects to post double-digit billings growth for its cybersecurity and technology units. Overall software and services revenue for the period is projected to come in between $675 million and $715 million, representing growth of 12% year over year at the midpoint of the target.

Why Cloudflare Stock Plummeted This Week