Please ensure Javascript is enabled for purposes of website accessibility
Log In Help Join The Motley Fool
Free Article Join Over 1 Million Premium Members And Get More In-Depth Stock Guidance and Research
By Jason Hawthorne - Apr 4, 2021 at 6:20AM

There are five billion reasons these companies hope it's not.

Many comparisons have been made between the current pandemic and the influenza outbreak of 1918. Despite being different viruses from different families, they both spread through the air and saw health experts urge people to take precautions to stop the spread. Most expected 2020 to be a difficult flu season on top of SARS-CoV-2. Instead, influenza has been unusually absent while the global count of COVID-19 cases has risen past 129 million.

There are a few theories about why it has disappeared, and the reason could have far-reaching implications for the lucrative market for the flu vaccine. Potential investors in producers like Sanofi (SNY 2.52%) and GlaxoSmithKline (GSK 2.20%), as well as some notable companies developing a preventative drug, should take note of the shift before buying shares. 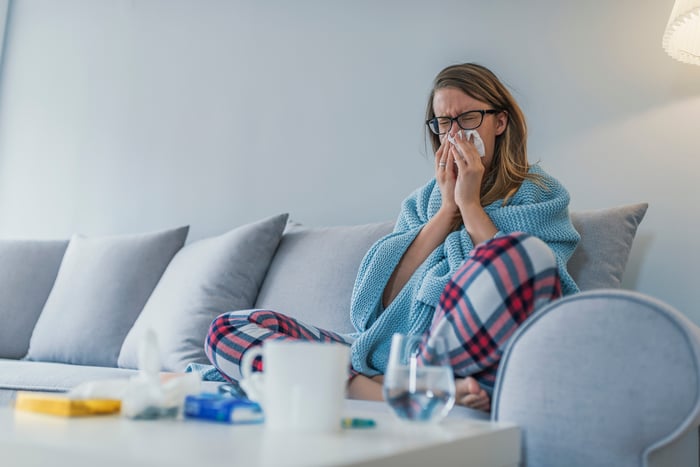 This is not normal

The flu kills about 290,000 to 650,000 people each year globally. In the U.S., that number is typically between 34,000 and 43,000. That's why it is so unusual that as of February, only 1,500 of the 800,000 or so lab samples that have been tested for the flu since fall in this country have come back positive. Last year, the rate of positive tests was nearly 100 times higher. That has implications for both the healthcare industry and the $5 billion market for the flu vaccine. That market was expected to reach $7.6 billion by 2027, but scientists are now wondering if it is vanishing.

It's hard to say exactly why this is happening. For one, every step of the healthcare system prioritized vaccinations this year. Production of doses was ramped up, and clinics and pharmacies encouraged early inoculation at every opportunity. The 189 million doses delivered as of December were the most ever given in a flu season in the U.S. Second, wearing masks, washing hands, and social distancing are obvious factors in preventing any respiratory illness. Researchers in Japan and Taiwan confirmed this by comparing the prevalence of several airborne illnesses in the past few years. All were down significantly in 2020. Finally, an underappreciated defense against the flu was closing schools. It turns out children are a key path of transmission for influenza. Some companies have a lot to lose if the trends persist.

Who stands to lose

Many are developing products to try to capture a share of the influenza vaccine market, but a few companies truly dominate the current landscape. Sanofi is the market leader, having sold 2 billion euros worth of its vaccine last year. That converts to about $2.35 billion. GlaxoSmithKline raked in 733 million pounds, or $1 billion. AstraZeneca (AZN 2.59%) brought in $295 million for its inoculating nasal spray Flumist, mostly in Europe. Many other vaccines are in development, undeterred by the anomaly of 2020.

Pfizer (PFE 3.59%) is looking for a vaccine encore with Comirnaty partner BioNTech (BNTX -2.90%), although it claims it will develop future mRNA medicines by itself. The company plans to bring the product to market before 2025. Johnson & Johnson (JNJ 1.75%) unit Janssen has also thrown its hat into the ring, teaming up with vaccine tablet maker Vaxart (VXRT 5.68%). They are all counting on influenza making a return once COVID precautions are thrown to the wind.

Someday, a company will develop a universal flu vaccine -- one that protects against all strains of the virus. For now, companies have to create vaccines to protect against specific strains that are predicted to circulate in the next year. That's why the efficacy of flu vaccines can swing so wildly from season to season. In addition to the more traditional approach, Janssen and Vaxart are also trying to develop a universal candidate but are only in the preclinical stage.

Chances are the influenza lull is just a temporary phenomenon. Viruses have a way of adapting. For instance, rhinoviruses like those responsible for the common cold haven't disappeared to nearly the same extent as the flu this year. No one knows for sure why that is. An important indicator about the future will be countries that have gotten a handle on COVID outbreaks. Only as the next flu season begins, and COVID precautions fade, will we truly know whether something has changed for good. There are several large pharmaceutical companies, and their shareholders, rooting for a return to normal in more ways than one.