Please ensure Javascript is enabled for purposes of website accessibility
Log In Help Join The Motley Fool
Free Article Join Over 1 Million Premium Members And Get More In-Depth Stock Guidance and Research
By Trevor Jennewine - Apr 4, 2021 at 8:12AM

The future looks bright for Palantir.

Palantir (PLTR 13.62%) has been described as "Silicon Valley's most secretive start-up." In its early days, the company developed software to help U.S. intelligence agents with counterterrorism investigations. But Palantir has since diversified its business, and it now works with other government agencies and commercial clients, both in the United States and internationally.

Palantir went public in Sept. 2020, and since then, the stock has surged over 140% from its first day closing price. But the company still has plenty of room to grow its business, and Palantir looks like a good long-term investment.

Many modern institutions, whether they are government agencies or commercial enterprises, generate an incredible amount of data. For instance, consider a manufacturing plant: There will be financial data from enterprise resource planning (ERP) systems, employee data from human resources (HR) systems, customer data from customer relationship management (CRM) systems, logistics data from distribution centers, inventory data from suppliers, sensor data from plant operations -- the list goes on and on. 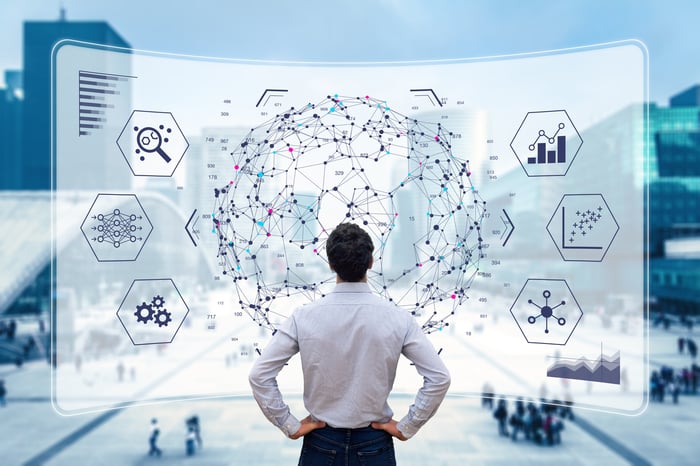 All that data is great -- organizations that effectively use data can gain a real advantage over their peers. But working with data on that scale is incredibly challenging.

Palantir solves this problem with its two software platforms: Gotham and Foundry. The former was built for government agencies in the defense and intelligence sectors, while the latter was built primarily to assist commercial customers. But both have a similar objective: They make it possible to integrate, analyze, and make sense of vast datasets. This allows clients to make faster, more informed decisions about their operations.

Currently, management estimates Palantir's total addressable market at $119 billion, which breaks down into $63 billion in the government sector and $56 billion in the commercial sector. That puts the company in front of a massive opportunity.

In April 2020, Palantir signed a $10 million deal with Space Force, the space service branch of the U.S. Armed Forces. Space Force will use Palantir's Foundry software to integrate sensor data and track objects in space.

In Oct. 2020 Palantir won a $91 million contract with the U.S. Army Research Lab, which will use Gotham and Foundry to integrate data and train AI models, expanding its artificial intelligence capabilities.

In the commercial sector, Palantir recently announced a new partnership with IBM. The effort will integrate Palantir's Foundry software with IBM's cloud data platform, making it easier for enterprises to build AI-powered applications.

These deals -- and the dozens of others signed last year -- could be substantial growth drivers for Palantir. For instance, IBM's 2,500-person sales force is larger than Palantir's entire business, so the partnership significantly expands the company's distribution capabilities. That could help it win new customers across a range of industries, from retail and healthcare to telecom and financial services.

As of Dec. 31, 2020, Palantir had just 139 customers, and the average revenue per customer was $7.9 million, up 41% from 2019. This means Palantir's sales are highly concentrated, and the loss of even a few customers could hurt the company in a big way.

Despite this risk, Palantir has grown revenue at a steady clip over the last two years.

Investors should be aware that Palantir is not currently profitable, because it's investing heavily in growing its business. For example, sales and marketing expenses accounted for 63% of total revenue in 2020, and research and development spending accounted for another 51%. As a result, operating cash flow came in at negative $297 million last year.

Even so, Palantir has over $2 billion in cash and equivalents on its balance sheet, so the company can afford to lose money for several years while its business scales. Moreover, at this stage in the game, spending heavily on growth makes sense. As Palantir's customer base expands, the company has the potential to be very profitable, as evidenced by its 68% gross margin.

Palantir trades at a pricey 38 times trailing 12-month sales. That rich valuation, combined with its lack of profitability, has made the stock rather volatile -- the share price is currently down nearly 50% from its 52-week high.

However, for investors willing to weather that volatility, this looks like a great time to buy a few shares. Palantir has an enormous market opportunity, and the company's history of working with government agencies on classified operations is a testament to its capabilities.