The equipment maker got a large order amid a continuing semiconductor shortage. 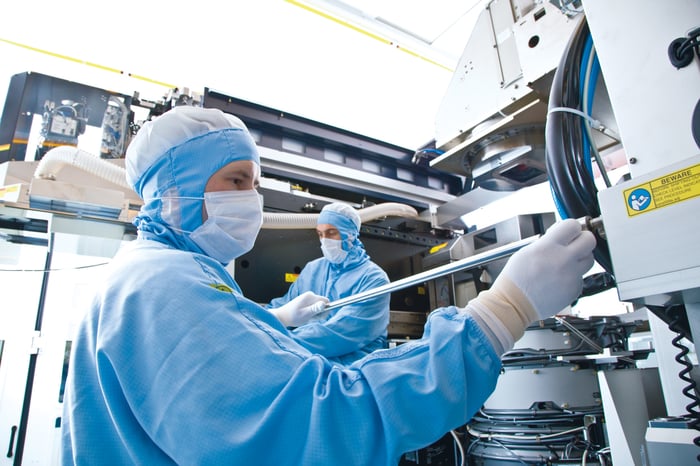 In late February, ASML inked a $4.3 billion five-year procurement deal with Korean chip giant SK Hynix (OTC: HXSCL) for around 30 EUV machines. The move is notable because while EUV technology has already made a big splash in semiconductor logic chips, it's just now moving into the memory-chip space.

However, SK Hynix is one of the world's largest memory producers, and will use EUV machines to produce its next-generation DRAM (dynamic random-access memory) chips. Hynix also recently announced a massive $106 billion cluster of fabrication plants in Korea, marking a huge expansion of its production capabilities.

This is just another instance of huge spending across the semiconductor space recently, which has boosted sentiment for semiconductor equipment stocks. In March, Intel (INTC 2.46%) held its Intel Unleashed event featuring new CEO Pat Gelsinger. While some had thought Intel might abandon in-house manufacturing altogether, Gelsinger instead doubled down, announcing two new fab plants in Arizona -- a project that will cost $20 billion. Intel also said it was doubling down on EUV in order to catch up to Asian rivals in leading-edge chip capabilities -- another positive for ASML.

Finally, analysts at Cowen upgraded their price target and ratings on ASML from neutral to buy, citing higher EUV demand visibility. All of these factors led to a solid 11.1% gain in March, putting ASML up a nice 26.6% for the year: 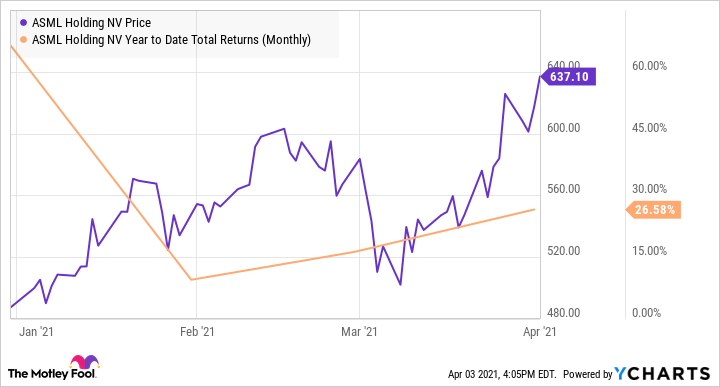 Trading at around 50 times this year's earnings estimates, ASML is much more expensive than some of its semiconductor-equipment peers. Yet that's at least partially deserved. The company holds a monopoly on EUV lithography technology, the key that unlocks today's smallest, most powerful, and most advanced chips. With leading semiconductor foundries recently announcing massive spending plans and even Western governments now allocating billions to bring leading-edge chip production to their shores, ASML's growth path over the next decade seems assured. Expect the good times to continue.