Please ensure Javascript is enabled for purposes of website accessibility
Log In Help Join The Motley Fool
Free Article Join Over 1 Million Premium Members And Get More In-Depth Stock Guidance and Research
By Anthony Di Pizio - Apr 6, 2021 at 11:36AM

As households emerge from the pandemic with stimulus-padded balance sheets, lenders stand to do record business

Ally Financial (ALLY 0.03%) entered the pandemic with a record stock price, but really displayed its experience by beating earnings estimates for the last three quarters thanks to its consumer-focused business mix. As an online-only bank, it was perfectly positioned to serve customers in the stay-at-home economy. The company now aims to expand on its enormous success in auto financing with other products, like mortgages, to drive future growth. If the company's current earnings trends continue into the future, it could become a powerful part of your portfolio. 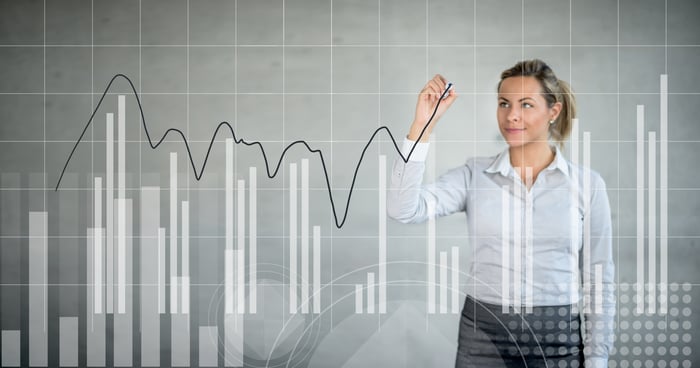 Earnings for the record books

Many companies can boast a rich history, but few have seen as many storms as this century-old financial institution.  Founded in 1919 by General Motors to provide automotive financing to its customers, Ally Financial remains true to its roots. It's the leader in auto finance, currently holding 7.7% of all car loans in the US -- $106.2 billion in loans to 4 million customers.

The pandemic led to 14.6% fewer cars being sold in the US last year, but Ally's loan book shrunk just 6.5%, a notable outperformance. The company built its auto dealer relationships to 18,700 — a record high — in an effort to reach more individual consumers amid weakness in other segments like fleet sales. Clearly a move that paid off, resulting in 54% more income as these loans deliver higher margins.

Supply chain disruptions triggered a shortage of new cars, driving up average transaction prices to a record $38,000, which helped to cushion the blow from reduced sales.

Ally's performance can be measured against the KRE, an S&P Regional Banking ETF. Since the pandemic lows in March 2020, the KRE is up 133%. By comparison, Ally Financial's stock has risen 360% over the same period! The company is being recognized for its operational performance, but based on estimates there is still room to move higher.

The power of the consumer

Armed with $5.3 trillion in federal government stimulus, consumers appear to have weathered the worst of the pandemic's economic shock. Evidence of these payments feeding through the economy surfaced in Ally Financial's full-year results for 2020. The company posted staggering growth in key consumer segments versus 2019, including:

Auto sales in the US are expected to return to growth in 2021, which should bolster Ally's core finance and insurance businesses. First-quarter numbers are in, showing 11.8% more cars sold compared to the first quarter of 2020, driven by strong consumer demand and low interest rates.

As an online-only, technology focused bank, Ally Financial's business relationships are critical. The success of its auto business is attributable to the 18,700-strong dealer network that connects it to consumers, but Ally has yet to replicate this advantage in other product areas.

As more of the lending origination process shifts online, the company is well placed to expand further into other segments like mortgages. With high year-over-year growth, its success thus far is clear, but time will tell whether Ally can take meaningful share away from bigger banks. Competing with rivals' physical presences can be tricky, since Ally may not generate the same level of brand awareness in a highly saturated space.

In the short term, the company will likely be best served focusing on its biggest business -- autos -- riding the stimulus-led wave of consumer spending that is likely to continue.

Ally Financial reports first-quarter earnings on April 19. The company is expected to deliver $1.08 per share, a similar number as the fourth quarter which was beaten handily. With the US economy now more open, and another stimulus bill freshly passed, watch for the company to exceed expectations yet again.

1 Smart Bank Stock to Buy in a Volatile Market