Please ensure Javascript is enabled for purposes of website accessibility
Log In Help Join The Motley Fool
Free Article Join Over 1 Million Premium Members And Get More In-Depth Stock Guidance and Research
By Jeremy Bowman - Apr 7, 2021 at 7:11AM

Connected TV is probably the fastest-growing advertising sector out there at the moment.

The transition from linear television to streaming has unleashed a boom in streaming-based digital ads, also known as Connected TV, which offer better targeting than traditional TV ads and give both the media publisher and advertiser much more data about who is watching.

A November 2020 report by eMarketer.com forecasts that the CTV market will grow 40% in the U.S. to $11.36 billion this year, and the market should continue to expand rapidly as a number of new services have just entered the streaming TV market.

And it now appears that digital advertising kingpin Facebook (FB 4.24%) could be the latest company to have its eye on the CTV prize. 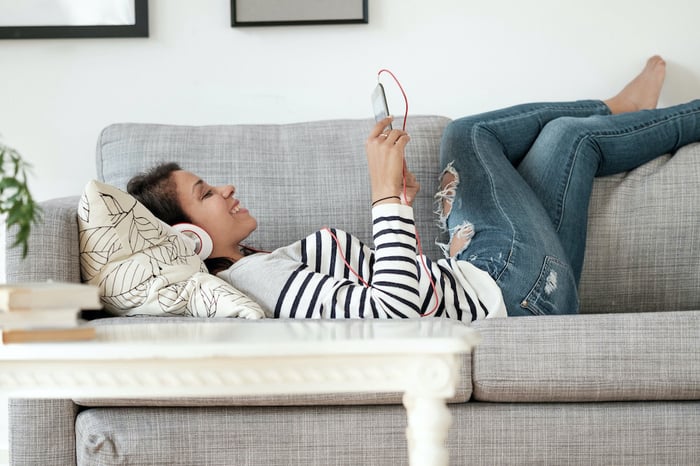 On Monday, Facebook announced a new ad product: dynamic ads for streaming. The tool allows Facebook and Instagram users to click on an ad for a streaming service and see personalized, relevant titles based on their own interests on Facebook and Instagram. The solution replaces the old way of doing business, in which a streamer would have to advertise individual titles to show off their content. Now streaming advertisers can set up their campaigns once and automatically generate unique ads for each title, rather than having to create individual ones for each time.

James Smith, head of entertainment at Facebook, explained, "With Dynamic Ads for Streaming, advertisers no longer have to manually create new campaigns for each individual title. Once an advertiser uploads their content catalog to Facebook, the dynamic ads deliver personalized recommendations, giving people a similar personalized experience they're used to seeing from their streaming services." Advertisers that have tested the new product, like Brazilian streaming service Globoplay, have seen strong engagement so far.

It's unclear if Facebook has a goal with these ads beyond their current implementation, but they could serve as a beachhead to build relationships with streaming services from which the company can further expand into streaming and Connected TV. The company's user data is unique, and no other social platform can identify users' streaming content preferences the way Facebook can -- and that's a valuable asset to streamers. Additionally, the company's user profiles offer considerable value for ad targeting, so an account obtained through a Facebook ad could potentially have more value than a direct sign-up.

Facebook made a play for the CTV ad market back in 2016, but it eventually shut down its audience network for the category in 2018. Part of the reason was that Roku, the leading streaming device maker and a powerful force in CTV, blocked Facebook from selling ads on its platform, as it saw advertising as a valuable business.

There were other challenges as well. Facebook didn't separate its streaming ad inventory on the audience network, and advertiser awareness of the CTV option seemed to be too low. Additionally, Facebook's base of advertisers didn't align well with a product that users can't easily click on. CTV tends to be more suitable for "brand advertising," or brand-awareness-building campaigns, rather than the kind of performance marketing with easily trackable data that Facebook typically serves.

However, the Connected TV market was much smaller in 2018, and Facebook may have a different experience today. Since it pulled the plug, ad-based services like Hulu, now owned by Walt Disney, have grown significantly, and a number of others have hit the market, like Comcast's Peacock, ViacomCBS's Paramount+, and Discovery Communications' Discovery+. In other words, CTV has reached a tipping point over the last year, so it's not surprising that Facebook might want a piece of the market.

The company is at a disadvantage against fellow tech giants like Apple, Alphabet, and Amazon, all of which offer their own streaming devices and services -- and Facebook Watch, which was billed as the company's answer to YouTube, has underwhelmed since its 2017 launch. But the dynamic ads product is a reminder that the company can do things with customer targeting that none of its peers can, and that could give it a unique inroad into streaming ads.

It's still unclear if the new product will lead to anything more than just a convenient way for streaming services to attract new users, but it's a reminder to investors that even as the stock is priced for slowing growth, Facebook has plenty of optionality in its arsenal -- including in VR/AR, e-commerce, payments, and new ad products like dynamic ads for streaming.

It's a good bet that at least one of those emerging businesses will pay off big down the road.