NIO's CEO said that the global semiconductor shortage may limit sales growth for a while.

Shares of Chinese electric-vehicle maker NIO (NIO -4.92%) were moving lower on Wednesday afternoon. The company shared some positive news -- a production milestone -- earlier in the day, but its shares were caught in a sell-off of electric-vehicle stocks that may have been driven by investor concerns about an ongoing shortage of automotive semiconductors.

As of 1:30 p.m. EDT, NIO's American depositary shares were down about 5.9% from Tuesday's closing price.

NIO CEO William Bin Li had good news and some less-good news to share at an event to commemorate the production of NIO's 100,000th vehicle on Wednesday. The good news is that NIO now has the ability to build 10,000 of its upscale vehicles per month.

That's a significant milestone, but it comes with a catch: NIO is limiting production to just 7,500 vehicles per month for now, because supplies of automotive semiconductors and battery cells are constrained amid global shortages. That's the not-so-good news, and it may be why NIO and other EV stocks were selling off on Wednesday afternoon. 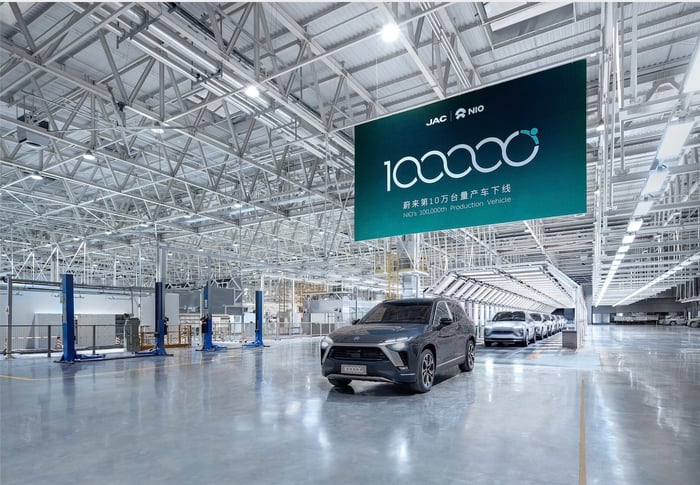 The 100,000th NIO, a blue ES8 SUV, rolled off the assembly line at the factory owned by NIO's manufacturing partner JAC in Hefei, Anhui province on Wednesday morning. In remarks to workers and media, Li noted that the first vehicle built on that line in May 2018 was also an ES8 -- but the current models have much-improved technology and considerably longer range.

According to Chinese electric-vehicle news site CNEVPost, Li told reporters at the event on Wednesday that he expects the semiconductor shortage to be a short-term issue, affecting NIO's production in the current quarter -- but likely easing after the middle of the year.