Please ensure Javascript is enabled for purposes of website accessibility
Log In Help Join The Motley Fool
Free Article Join Over 1 Million Premium Members And Get More In-Depth Stock Guidance and Research
By Bram Berkowitz - Updated Apr 9, 2021 at 10:55AM

In his closely watched letter, Dimon spoke about the U.S. economy, inflation, regulation, and challenges in the banking system.

JPMorgan Chase (JPM -0.34%) CEO Jamie Dimon recently released his annual letter to shareholders, a piece of literature widely read by the investing community. The 66-page, 35,000-word letter discussed a broad variety of events, topics, and policies, ranging from the coronavirus pandemic to banking regulation to what to expect from the U.S. economy.

Having now successfully steered JPMorgan Chase -- America's largest bank by assets -- through two recessions, Dimon is viewed as a leader in the banking and finance communities. Here are five important things Dimon said in his letter pertaining to banking and the economy.

1. The U.S. economy will likely boom

Like other economists and the Federal Reserve, Dimon expects the U.S. economy to surge as the coronavirus pandemic winds down. "I have little doubt that with excess savings, new stimulus savings, huge deficit spending, more QE [quantitative easing], a new potential infrastructure bill, a successful vaccine and euphoria around the end of the pandemic, the U.S. economy will likely boom," he wrote.

While the length of the boom can't be known at this time, Dimon said it could easily extend into 2023. He also said that a multiyear booming economy could justify current high equity valuations, with investors potentially pricing in big economic growth and excess liquidity finding its way into the market. 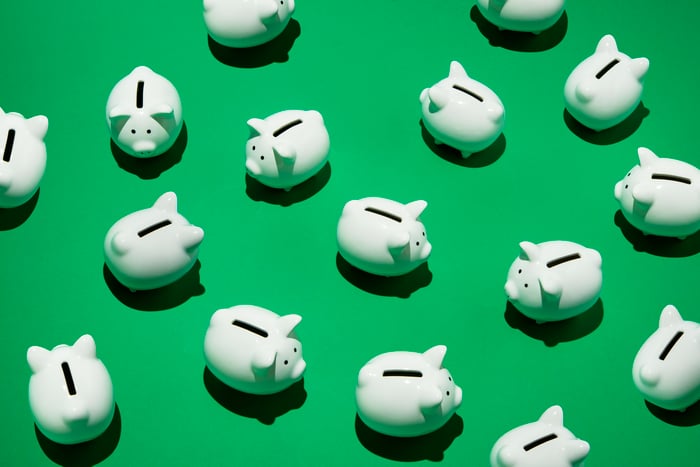 Dimon called the possibility of longer-term inflation "not unreasonable." The statement came after officials from the Federal Reserve appeared to be divided on the outlook for inflation in their recent March meeting. "Rapidly raising rates to offset an overheating economy is a typical cause of a recession," Dimon wrote.

Fears of inflation have been driving a lot of market trends this year, because inflation often leads to rate hikes, which makes riskier investments like tech stocks less appealing when safer investments like U.S. Treasury bonds are paying a better yield. Dimon said the hope is for a "Goldilocks moment," which he described as fast and sustained growth during which inflation and rates rise modestly but not too much. But the possibility for sustained inflation and rate hikes is very real, which could drive up the cost of interest on U.S. debt fairly significantly, he said.

3. Banks are a smaller part of the financial system

Dimon said that banks have become a smaller part of the overall financial system. Data compiled by JPMorgan shows that U.S. bank market capitalization grew $1 trillion between 2000 and 2020, while the market cap of global systemically important banks (GSIB) grew by $300 billion. U.S. bank loans grew by nearly $7 trillion in that time frame as well. While it might sound like a lot, shadow banking has grown more, with total private direct credit jumping from $7.6 trillion in 2000 to $18.4 trillion in 2020.

Meanwhile, huge tech companies like Alphabet, Amazon, Facebook, and Apple have seen their size jump from a nonmaterial amount in 2000 to $5.6 trillion at the end of 2020. The size of payments companies has grown to $1.2 trillion, and the size of private and public fintech companies is now $0.8 trillion.

Dimon views this as a bad trend, considering banks are reliable, less expensive, and consistent lenders through good and bad economic times. He added that transactions made by "well-controlled, well-supervised and well-capitalized banks may be less risky to the system than those transactions that are pushed into the shadows."

One of the main reasons banks are becoming a smaller part of the financial system can be attributed to regulation, Dimon told shareholders. While Dimon acknowledges that the new Dodd-Frank regulatory framework put into place following the Great Recession succeeded in keeping banks healthy through the brunt of the coronavirus pandemic, he still sees major issues with it. This is not new, of course, as Dimon has long lobbied for regulatory reform.

One issue he sees is with a Dodd-Frank rule called the liquidity coverage ratio (LCR), which made more stringent rules around liquidity and, according to Dimon, effectively prevents larger banks from lending out all of their deposits. For instance, Dimon points out the fact that prior to the pandemic, banks had $13 trillion in deposits but only $10 trillion in outstanding loans. He believes that the $3 trillion in "lost lending" is directly related to the LCR requirement and may very well have contributed to stagnation in the U.S. over the last decade.

Dimon also believes fintechs and other nonbanks have several advantages over traditional and more heavily regulated banks. One example he points to is that banks with more than $10 billion in assets are subject to the Durbin Amendment, which limits the portion of debit card interchange fees they can collect on transactions. Dimon said that a bank servicing a checking account that spends $20,000 per year only makes $120 in debit revenue, whereas a small bank or nonbank would make $240. "This difference may determine whether you can even compete in certain customer segments," he wrote.

Although a very different kind of recession, the pandemic served as the first real test since the dreadful Great Recession. While they certainly had some necessary help from the federal government's stimulus bills, banks performed very strongly, and JPMorgan is a great example.

If you look at the chart below, new accounting rules and the pandemic forced JPMorgan to boost its total reserves for potential loan losses by 143% from the fourth quarter of 2019, all the way to $34 billion at its peak in 2020. That still didn't stop JPMorgan from generating a 14% return on tangible common equity last year. 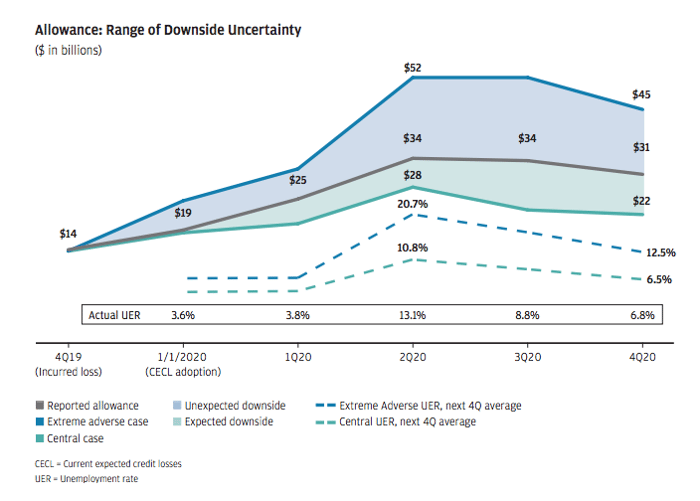 Perhaps even more impressive is that the bank prepared for a situation in which unemployment over a one-year period would remain at or above 12.5%, a scenario worse than what it was put through in the Federal Reserve's stress testing last year. And that scenario doesn't seemed to have fazed Dimon. "I also have very little doubt that if the severely adverse scenario played out, JPMorgan Chase would perform far better than the stress test projections," he wrote.