Please ensure Javascript is enabled for purposes of website accessibility
Log In Help Join The Motley Fool
Free Article Join Over 1 Million Premium Members And Get More In-Depth Stock Guidance and Research
By Rick Munarriz - Apr 8, 2021 at 10:46AM

Two smart-tech companies want to dress you up. Let's dress them down to find the better portfolio fit.

It's always scary when a tech-savvy juggernaut identifies your niche as a new revenue stream, and that's what we saw play out two summers ago when Amazon (AMZN 0.41%) quietly introduced Personal Shopper by Prime Wardrobe. Similar to Stitch Fix (SFIX 6.54%) and other platforms where guests receive stylish apparel and accessories at regular intervals, Amazon was hoping to bring its scale, pricing, and unmatched bank of e-commerce data to this small yet growing specialty market.

The good news for Stitch Fix is that -- outside of a single quarter when the pandemic sucker-punched demand for new clothing -- it's still growing. Amazon's entry is still a challenge, but it's clearly not a priority for the world's largest online retailer. However, Stitch Fix is still going through growing pains at a time when Amazon just keeps hitting it out of the park. Let's size up the two investments to see which one is the more fashionably curated "fix" for your portfolio. 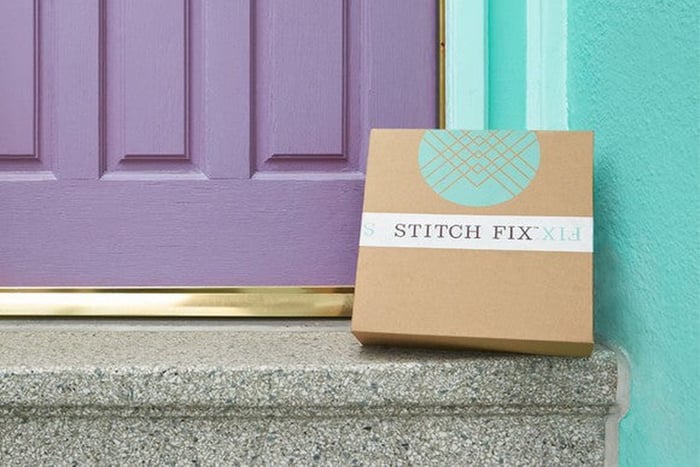 Stitch Fix was posting consistent double-digit growth until the COVID-19 crisis made sweatpants around the house perfectly acceptable. With work, classes, and social events going virtual, there wasn't a lot of interest in paying up for an updated wardrobe. Stitch Fix saw its revenue decline 9% through the fiscal first quarter that consisted of February, March, and April of last year, and that's not too shabby compared to the sharp double-digit-percentage hits that so many other consumer-facing outfitters experienced.

Stitch Fix stood out with its stylist-curated approach, and business started to recover by the very next quarter. Since that 9% hit, we've seen Stitch Fix come through with year-over-year quarterly gains of 3%, 10%, and 12% in the last three quarters. The stock even began to rally last year on the quick turnaround, but the 12% increase in sales that it delivered in last month's report was less than what Wall Street was expecting. Guidance of 37% growth for the current quarter was also not as good as it may seem at first glance since this is pitted against the 9% decline from last year's pandemic-stung report. The $505 million to $515 million that it's modeling on the top line for the new quarter was below analyst forecasts.

It also doesn't help that Stitch Fix pointed to challenges in its supply chain slowing deliveries and weighing on its near-term sales. Here we are with folks returning to the office, classroom, and social scene -- when Stitch Fix should be at its best -- and it misplaced the RSVP invitation to the soiree.

Amazon, as most investors know by now, didn't skip a beat during the pandemic. It thrived in a climate where folks turned to e-commerce for everything from groceries to new furnishings, in order to make the shelter-in-place phase of the COVID-19 crisis more palatable. Then we have Amazon's cloud-hosting services and its streaming entertainment that were built for this kind of environment.

Amazon came through with its strongest revenue growth since 2011 last year. Net sales soared 38% for all of 2020, including a 44% surge in its latest quarter. The bottom line grew even faster, up 82% for the year and more than doubling for the holiday quarter.

Amazon's dominance in a realm of retailer stocks is unquestioned at this point. It's the all-weather beast that slides in nicely in any growth-oriented portfolio. Stitch Fix may have more upside if it returns to its former glory. And despite being earlier in its growth cycle, it trades at a lower sales multiple than Amazon. But there are now fresh question marks at Stitch Fix, making it a lot riskier than Amazon. So Amazon is the better buy right now.