Please ensure Javascript is enabled for purposes of website accessibility
Log In Help Join The Motley Fool
Free Article Join Over 1 Million Premium Members And Get More In-Depth Stock Guidance and Research
By Jennifer Saibil - Apr 9, 2021 at 10:10AM

The personal clothing service is still relatively young, and its future is wide open.

Buying shares of good companies during their early days on the public markets can offer investors a chance to maximize long-term gains. This at least partially explains why so many IPOs skyrocket as hopeful buyers rush in.

The challenge of investing so early in a company's public existence, of course, is knowing whether or not a stock will appreciate significantly over the long term, stay flat, or even go bust. For instance, Stitch Fix had a novel concept when it began operating in 2011 and eventually IPO'd in 2017. But when a company is trying to break new ground, investors are often better off waiting a bit to see if its revolutionary new business model will be profitable or a dud.

Stitch Fix has been building up its business now for a decade or so. Which path is it on? 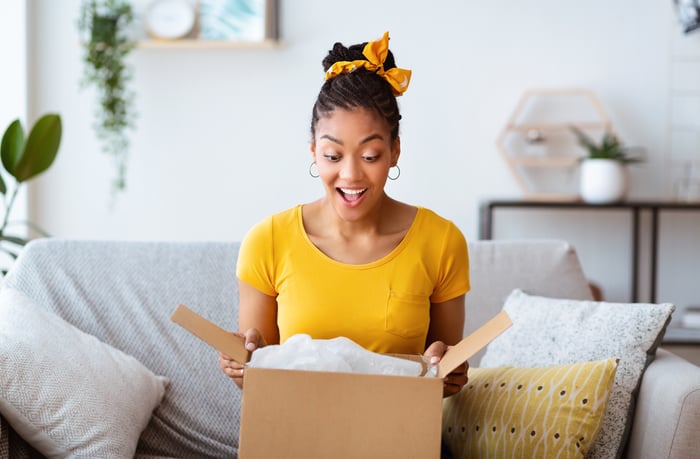 So some investors clearly did well if they timed their Stitch Fix share purchases properly. But the question of where the company (and the stock) goes from remains: Can investors get rich with Stitch Fix stock?

Stitch Fix is poised for the pandemic

Stitch Fix is the leading online personal styling service, which meant it was ready for the early months of the pandemic when brick-and-mortar clothing stores across the country were shuttered. Its sales did decline in its fiscal 2020 third quarter which ended May 2, but its performance was still much better than other brick-and-mortar-based apparel companies.

Even during that time, Stitch Fix revenue per customer increased 6% and the client count increased 9%.

In the subsequent three quarters, Stitch Fix got back to growth, although at a slower pace than it was achieving prior to the pandemic. The company posted a $9.5 million profit in its fiscal first quarter 2021, which ended Oct. 31.

The big blowout came after its fiscal second-quarter 2021 earnings release in March, when Stitch Fix missed on revenue and posted another loss. The stock price plunged and was down about 11.8% year to date.

CEO Katrina Lake attributed the revenue miss to shipping issues. The company's model works through "fixes" -- its stylists send customers boxes of clothing based on a quiz and personal requests, and the customers are only billed after they return the boxes with the items they don't want to buy. Shipping delays meant some revenue -- maybe just enough that it would have met its guidance -- wasn't recorded until later.

The conditions during the pandemic are not necessarily indicative of where Stitch Fix is going. The company is gaining customers every quarter, and revenue increased 12% year over year in fiscal 2021 Q2 despite the miss.

It's expanding with new features using its data-driven system, and recently launched a direct-buy option that allows customers to shop their own preferences without a fix. It also rolled out a preview feature so customers can see what's coming before the apparel gets to them.

Revenue per customer decreased for the past two quarters, but management said that was expected as the average was diluted by high new client growth.

With an active customer count numbering less than 4 million and revenue just over $500 million, there's plenty of room for growth.

Does Stitch Fix have what it takes?

Plenty of stocks have the potential to make an investor rich. But your best chance to become a millionaire from your position in one stock (though it's a risky strategy) is to put a lot of money into an early-stage company that looks to have a winning formula.

Stitch Fix is a decade old, but it's still in the early stages of customer adoption. The question comes down to how winning is its formula? There's a lot of potential, but if you're going to put your cash into Stitch Fix, you have to believe that it will change apparel shopping for at least enough people to make it a viable business long term.

I think Stitch Fix has a huge opportunity as e-commerce gains more traction and the company expands beyond the early adopters. But it will likely take a long time and a large investment to become a millionaire from a Stitch Fix stock purchase.