If you're like millions of Americans, chances are you spent a lot of money at Costco Wholesale (COST 0.90%) over the past few months.

The warehouse retailer had some of its best quarters in years as members stocked up on bulk items during lockdowns, and so far sales growth is still high. As the world moves past the worst of COVID-19, what can we expect for Costco? Let's see where it will be in one year. 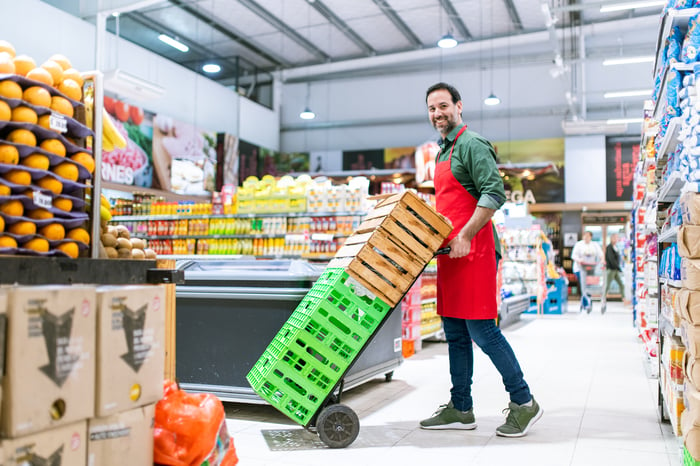 A focus on essentials means a boost for Costco's sales

Americans stocked up during the pandemic, and Costco got a nice chunk of that spending. Sales growth has accelerated over the past year, and you can really see the difference compared to the prior-year periods. Pay special attention to e-commerce, which started growing as state and local governments began to shut down.

So 2020 was an outlier for Costco's sales, and that kind of growth is not likely to be repeated in coming year. But there are reasons to be optimistic about Costco's future.

Costco's membership model means that it makes revenue from fees, and the customers who pay $60 a year to advantage of Costco's lower prices tend to be loyal. Around 90% of members renew annually, and millions of new customers join each year. Costco's gross margins are fairly thin, coming in at around 11%, but it makes up for that with fees and huge sales numbers -- $163 billion in fiscal 2020 (which ended Aug. 30).

2020 annual sales were about a quarter of those of top U.S. essentials company Walmart, but Costco has less than one-fifth of Walmart's store count. It operates 804 stores globally, and just 558 in the U.S., leaving it ample expansion opportunities domestically and beyond. It opened 16 stores in 2020 and expects to open between 20 and 22 in fiscal 2021, a slow and steady pace. It has years of new stores ahead, especially as it expands globally.

As people begin to spend on non-essentials, Costco can gain there, as well. It has a travel category, which was closed and is still functioning below pre-pandemic levels. It also sells jewelry, appliances, and other large and expensive items. It cited shipment delays in the past two quarters for exercise equipment and other large items, and as those delays ease, the company can sell more of these products. Customers are also moving toward e-commerce, which was an important part of Costco's story during the pandemic.

This time next year, the company should be running at full speed with all of its departments open. While essentials sales may fall, travel and other ancillary business sales should be up. So at this time next year, sales might still be higher than they were before the pandemic started.

At Friday morning's prices, Costco's stock has gained about 20% over the past year. Shares trade at 37 times trailing 12-month earnings -- a little higher than the company's recent history but a valuation that's unlikely to age poorly. Costco's consistent growth has made it a favorite for years, returning 97% over the past three years and 139% over the past five, both beating the S&P 500's comparable returns.

It also pays a growing dividend that yields 0.78%, and it has also paid a special dividend every few years, most recently in November for $10. It isn't likely to issue one again next year, but it will probably raise its dividend.

In 2022, Costco will have more stores and more members. Sales growth may slow down, but they'll continue to increase, and the stock is likely to rise as well.