Please ensure Javascript is enabled for purposes of website accessibility
Log In Help Join The Motley Fool
Free Article Join Over 1 Million Premium Members And Get More In-Depth Stock Guidance and Research
By Rich Duprey - Updated Apr 12, 2021 at 9:45AM

The record $2.8 billion fine regulators levied again Alibaba Group Holding (BABA -0.84%) over the weekend for violating the country's anti-monopoly laws has other Chinese tech stocks worried that they are in Beijing's firing line.

Conglomerate Tencent Holdings (TCEHY -0.18%) believes it may be next. It is already under scrutiny from regulators because it was previously fined for not receiving required prior approval for acquisitions, as well as its role in helping shepherd a merger between video game live-streaming leaders HUYA and DouYu International Holdings that is being examined for antitrust violations. 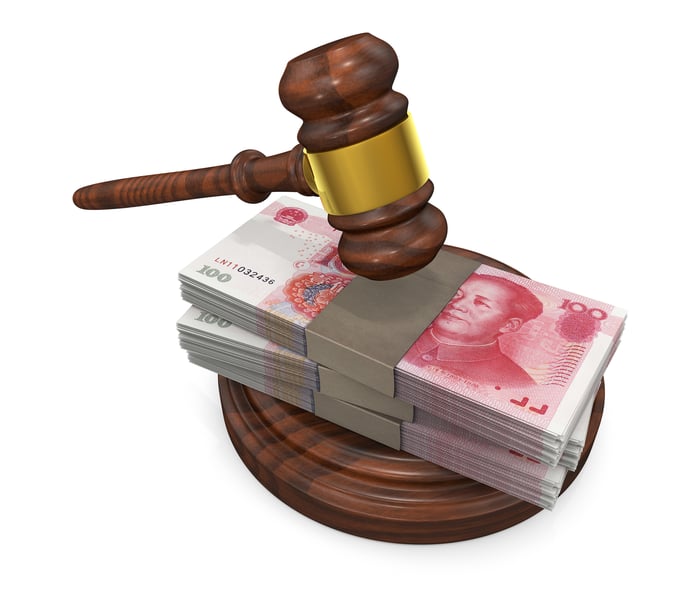 The Financial Times reported today that the sprawling operations of Tencent that could be more closely examined include its WeChat social media platform, its music licensing business, the gaming division, its online lending practices, and all of its merger and acquisition activity.

According to the Times, no company outside of financial institutions invested in more start-ups last year than did Tencent.

Over the weekend, e-commerce giant Alibaba was socked with the massive fine for its purported monopolistic practices, such as forcing third-party merchants to choose between one of two online platforms instead of being able to sell on both.

Last month, Beijing reportedly began demanding Alibaba devise a plan to divest its media interests because of its ability to sway public opinion on issues.

Another e-commerce site, Meituan, is also concerned it will be targeted by regulators who are likely emboldened by their recent successes in fining companies.

Meituan, Alibaba, Tencent, Pinduoduo, and ridesharing service Didi were all fined recently for their role in an "improper pricing" scheme related to discounts for group-buying of groceries.

With U.S. and European regulators scrutinizing tech stocks with an eye toward a possible breakup, their Chinese counterparts undoubtedly want to keep their own situation from escalating.