The semiconductor giant unveils a new chip designed for the data center.

Shares of NVIDIA (NVDA -1.50%) climbed today while shares of rivals Intel (INTC 0.05%) and AMD (AMD -1.06%) dipped after NVIDIA unveiled a new CPU that will put competitive pressure on the latter companies in the important market for data center processors. As of 3:15 p.m. EDT, here's where all three semiconductor stocks were trading:

NVIDIA kicked off its annual GPU Technology Conference (GTC) today with a slew of announcements, but the unveiling of a new CPU easily stole the show as the most meaningful new product. The company has long specialized primarily in GPUs instead of CPUs, and NVIDIA's prior efforts to develop CPUs have been lackluster. NVIDIA used to make Tegra processors for mobile devices, and it discontinued the Project Denver CPU core several years ago. 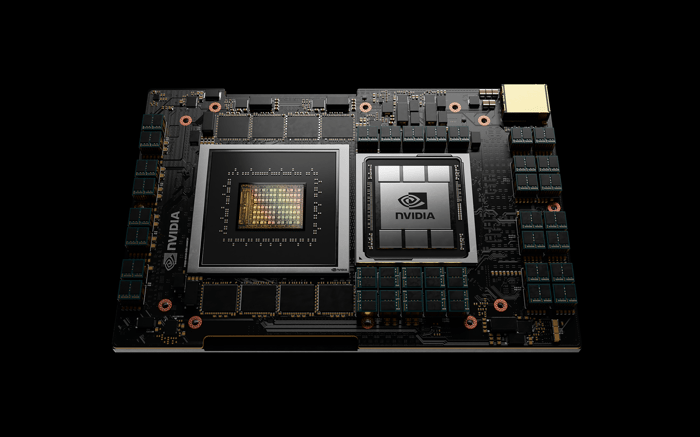 The company has now detailed a new chip called the NVIDIA Grace CPU, which is designed specifically to cater to the needs of the data center market. NVIDIA's GPUs have already been making inroads in data centers, powering cloud-based artificial intelligence (AI) workloads and other high-performance computing (HPC) applications. NVIDIA says Grace will deliver massive 10-time performance gains on servers for complex AI and HPC tasks.

The Grace chip, named after renowned computer scientist Grace Hopper, is built using Arm's high-efficiency architecture to enable that performance while using relatively less energy. NVIDIA is currently in the process of trying to acquire Arm, the British chip company that designs the architecture that nearly all mobile devices use, from Softbank for $40 billion in a deal that could reshape the chip industry.

The data center market has become increasingly important to NVIDIA's fortunes, with that business generating $6.7 billion in revenue last fiscal year. The segment is NVIDIA's fastest-growing business, with sales jumping 124% in fiscal 2021 while the core gaming business grew by a relatively more modest 41% to $7.76 billion.

Grace represents a significant competitive threat to Intel and AMD. Intel has long dominated the market for data center processors, and its Data Center Group (DCG) is among its most profitable businesses, generating $10.6 billion in operating profits in 2020. But DCG revenue declined 16% in the fourth quarter as rivals like AMD have been chipping away at Intel's market share.

The volume of data that needs to be processed in the age of AI and HPC is massive and growing exponentially, and NVIDIA believes it has the best chip for the job.