Please ensure Javascript is enabled for purposes of website accessibility
Log In Help Join The Motley Fool
Free Article Join Over 1 Million Premium Members And Get More In-Depth Stock Guidance and Research
By Cory Renauer - Apr 13, 2021 at 6:56AM

These drugmaker stocks may have been hammered down to bargain-bin prices.

The past month has been awfully hard on biotech stocks across the board. That made it an inauspicious time to report clinical trial results that were anything less than outstanding.

Apparently, these three biotech start-ups didn't get the message. All three stocks fell hard on readouts that weren't quite what investors had hoped for.

This clinical-stage biotech is trying to treat a common form of hearing loss with its lead candidate, FX-322. Sensorineural hearing loss (SNHL) is caused by damaged hair cells in the inner ear that break up the reception of one frequency after another until everyone sounds like they're speaking to you through blown-out car speakers. Earlier this year, Frequency Therapeutics stock soared because a single injection of FX-322 into the middle ears of 16 patients in a phase 1 trial led to significant improvements compared to those who were injected with a placebo. 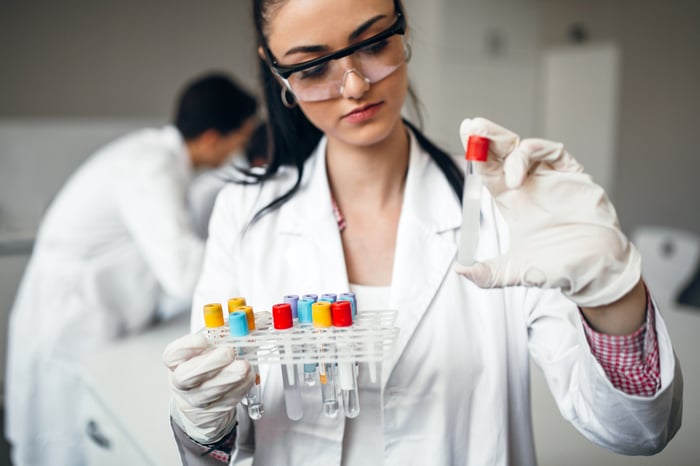 More recently, shares of Frequency Therapeutics have been getting hammered, because FX-322 couldn't repeat its previous success in a larger placebo-controlled trial that involved multiple injections instead of just one. Frequency Therapeutics blames its multi-injection trial design for the disappointing phase 2 data, and more recently presented results from single-arm studies suggest that it's too early to throw in the towel.

Frequency Therapeutics thinks more than 40 million people in the U.S. could benefit from a drug like FX-322 that regenerates damaged hair cells in the inner ear. This means the company's modest market cap could swell to many times its current size, if Frequency Therapeutics can show strong evidence that a single injection of its lead drug works as intended.

Earlier this month, shares of Scholar Rock tanked after 12-month data from the Topaz study showed improvements that weren't as meaningful as investors had hoped. Follow-up data for apitegromab didn't set off fireworks as hoped, but an approach that includes a drug that prevents progressive nerve damage for SMA patients seems likely to succeed.

Biogen (BIIB 3.28%) also has a drug designed to prevent motor neuron damage, called Spinraza. A subgroup of patients with SMA type 3 who were treated with a combination of Spinraza and apitegromab showed meaningful muscle-function improvements at the 12-month follow-up point. These patients will still have a tough time opening pickle jars, but the improvements measured so far could translate into huge quality-of-life improvements over the long run.

To seek confirmation of positive observations noted in the Topaz trial, Scholar Rock will rush its lead candidate into a larger pivotal study. Successful results down the road could help this stock regain its recent losses, and more.

Shares of this clinical-stage biotech tanked in March after the company reported disappointing results from a clinical trial in patients with Duchenne muscular dystrophy (DMD). This is an inherited muscle-wasting disease caused by mutations in the gene for dystrophin, a structural protein that keeps neighboring muscle tissues from grinding against each other with every movement, breath, and heartbeat.

Solid Biosciences' lead candidate, SGT-001, is a viral vector filled with genetic instructions for portions of the naturally occurring dystrophin gene. This experimental gene therapy delivers microdystrophin, because the original recipe is way too big to fit inside any virus reengineered to work as a delivery vehicle. Early results showed encouraging signs of a functional benefit during an interim assessment of an ongoing dose determination study.

Shares of Solid fell apart in March after the company reported follow-up results that weren't as fantastic as Wall Street had expected. After 48 weeks, the first three patients given a high dose of SGT-001 showed slight improvements that were better than you'd expect from similar untreated patients, but lower than improvements previously reported for a much smaller dose.

Most likely to rebound?

Solid Biosciences isn't the only company developing a miniaturized form of dystrophin. The clinical-stage start-up is up against Sarepta Therapeutics (SRPT 1.00%) and Pfizer (PFE -0.23%), and both have reported somewhat disappointing long-term data. Further results that separate SGT-001 from the competition could allow Solid Biosciences stock to pop right back up, but it could take a long time. The company still doesn't know when it will begin a phase 3 trial.

Frequency Therapeutics didn't discover a brand-new molecule in an effort to regenerate hair cells in the inner ear; FX-322 is an old anti-seizure drug combined with a widely available cell-growth promoter that's usually limited to laboratory experiments. There's nothing wrong with repurposing old molecules, but investors should know that the company has no other potential sources of revenue.

Frequency and Solid are performing high-wire acts without a net, but Scholar Rock's lead candidate is the first in a series of uniquely designed antibodies. At a recent scientific conference, Scholar Rock unveiled a recently initiated clinical trial with SRK-181, another antibody designed to help immune systems fight cancer. As the company with the most shots on goal, Scholar Rock seems more likely to rebound than the other biotech stocks on this list.

Why Scholar Rock Is Sinking Today