Please ensure Javascript is enabled for purposes of website accessibility
Log In Help Join The Motley Fool
Free Article Join Over 1 Million Premium Members And Get More In-Depth Stock Guidance and Research
By Howard Smith - Updated Apr 13, 2021 at 11:23AM

Beta Technologies has secured its second order for its vertical takeoff and landing aircraft in a week.

Vermont-based Beta Technologies has announced a second order within a week for its electric vertical takeoff and landing (eVTOL) aircraft. Last week, an order from United Parcel Service (UPS -0.20%) helped to validate the technology, according to Beta founder Kyle Clark. Today, Blade Urban Air Mobility announced plans to become the first to use the technology for passenger transport.

Blade is an urban air mobility platform that currently offers helicopter, seaplane, and executive jet service in select locations including New York City, Los Angeles, South Florida, and vacation destinations like Aspen, Colorado. The companies announced that Blade has ordered up to 20 of Beta's passenger-designed Electric Vertical Aircraft (EVA) with delivery beginning in late 2024. Last week, UPS agreed to take 10 cargo models of the aircraft, also scheduled to begin arriving in 2024, with an option to purchase up to 150 in total. 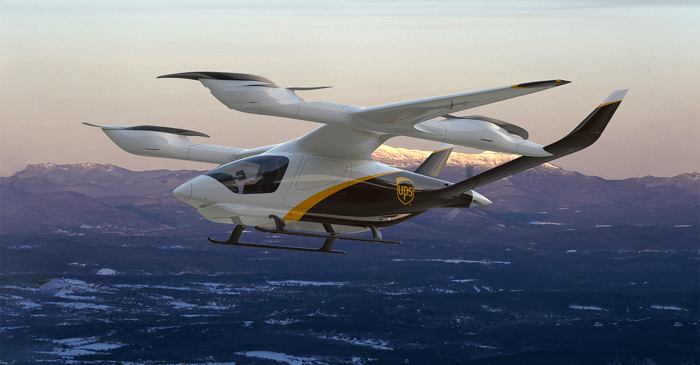 UPS plans to use the aircraft for select small and mid-size markets, using UPS property for takeoff and landing. The aircraft takes off like a helicopter, and then flies like a plane. The cargo version can carry 1,400 pounds. It can travel up to 250 miles at 170 mph once fully charged, which can be done in less than an hour.

Blade plans to go public in the first half of 2021 at a valuation of approximately $825 million after a merger with special purpose acquisition company (SPAC) Experience Investment (EXPC). The company said its initial order of EVAs will be used "on routes between its network of dedicated terminals in the Northeast, where Beta has agreed to provide and install charging infrastructure at certain key locations."

Beta's aircraft are designed to someday operate autonomously as technologies and regulations are established, according to the company.