Please ensure Javascript is enabled for purposes of website accessibility
Log In Help Join The Motley Fool
Free Article Join Over 1 Million Premium Members And Get More In-Depth Stock Guidance and Research
By Zhiyuan Sun - Apr 13, 2021 at 6:20AM

This is the top telemedicine company tackling a $250 billion U.S. virtual care market.

Teladoc Health (TDOC 4.88%) was one of the best-performing healthcare stocks of the past five years, especially thanks to its performance in the last 18 months. If you'd invested just $10,000 into its shares back in Oct. 2019, that principal would be worth well over $26,400 as of April 12. The same investment in the S&P 500 would have returned only 40% over the same period.

Year to date, however, Teladoc has vastly underperformed the overall index, falling 11% compared to the S&P 500's gain of 9%. Is there something signaling the company's momentum is coming to an end? 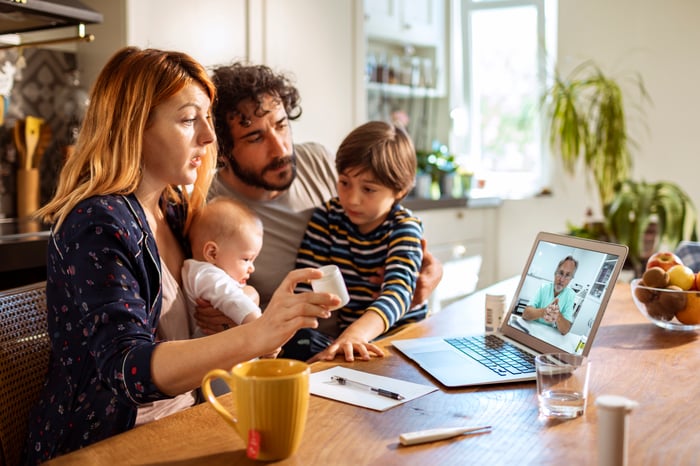 Even though that's very impressive, investors are expecting Teladoc's bottom line to fall off a bit of a cliff. For much of 2020, the COVID-19 pandemic has forced patients to avoid in-person consultations with their doctors and move online. It is reasonable to expect that after the pandemic blows over, there will be a huge shift in patient dynamics back to visiting health clinics and hospitals, as certain procedures simply cannot be performed over a virtual platform.

Luckily, telehealth seems here to stay in some capacity. Before COVID-19 hit, only 11% of Americans would want to seek care over the internet. But that number has now risen to 76%.

Teladoc is looking to become a one-stop platform for all virtual health needs. Its team of medical professionals includes behavioral experts, therapists, specialists, doctors, and nurses. The services also allow doctors to prescribe medications, which can be fulfilled at pharmacies of the patients' choosing.

Last year the company added chronic disease treatment to its platform with its $18.5 billion acquisition of Livongo Health, which finalized in October. In Q3 2020, it had 540,000 members enrolled in this segment. At the end of the fiscal year, that number has already risen to 600,000.

Over 40% of Fortune 500 companies currently use Teladoc. Over 50 healthcare plans around the country also cover its service. It should be no surprise that the company is earning new interest from business' savviest players, as it invests up to 16% of its sales each year into improving its platform.

So there's every reason to expect that Teladoc will keep up its momentum. This year, the firm expects to increase its revenue and EBITDA to $2 billion and $265 million, respectively. What's more, the company has enormous potential to scale its business outside the U.S. It currently operates in over 175 countries.

With a revenue retention rate of over 90%, a diverse array of virtual services, and an expanding subscriber base, Teladoc's growth is extremely sustainable. Therefore, it should have no problem meeting -- or even surpassing -- its revenue guidance for a 30% to 40% increase per year through 2023. Its valuation of 14 times revenue is expensive, but still reasonable given its rate of growth. Moreover, its multiples have gotten a lot cheaper since the stock sold off nearly 40% from records due to fears about patients foregoing telehealth services after the pandemic. I think that the healthcare stock could bounce back and reach new all-time highs in no time.