Please ensure Javascript is enabled for purposes of website accessibility
Log In Help Join The Motley Fool
Free Article Join Over 1 Million Premium Members And Get More In-Depth Stock Guidance and Research
By David Jagielski - Apr 13, 2021 at 8:32AM

Their share prices have been soaring this year, but investors may want to consider cashing out before it's too late.

A meme is something that goes viral on the internet and can make something or someone incredibly popular in a short period of time. Stocks like Sundial Growers (SNDL 1.46%), AMC Entertainment, and GameStop are great examples of that. Before January, when they became popular stocks on the WallStreetBets Reddit forum, they wouldn't have generated much excitement or bullishness. None of them were performing terribly well amid the pandemic and they all faced uncertain roads ahead.

But then Reddit noticed them. And while some of the fanfare has died down of late, these three stocks have all at least doubled in value since the start of 2021. However, investors who are eager to jump on the meme-stock bandwagon should exercise caution. These stocks carry significant risk, and you could lose lots of money on them. 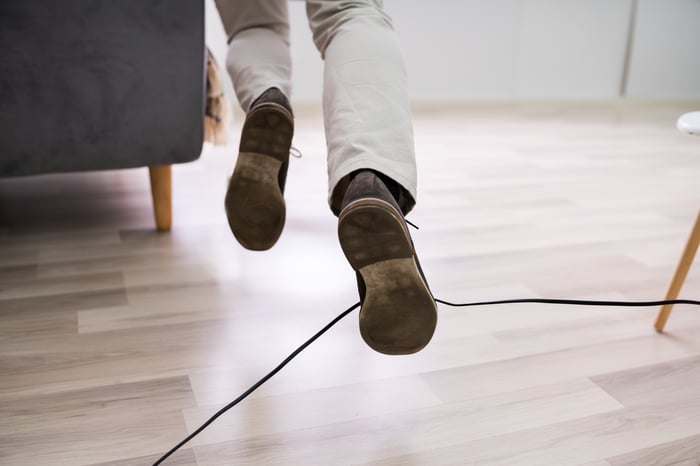 When a company's stock surges unexpectedly, it creates an opportunity for management to take advantage of the higher valuation and issue shares. Since meme stocks typically involve struggling businesses and investors looking to go against the grain, there is often plenty of incentive for these companies to raise money.

Those funds can help a business dig itself out of debt or make a big move that can transform its operations and improve its long-term outlook. In January, management at struggling movie theater operator AMC said that after raising $917 million over several weeks, it had removed the threat of bankruptcy and could continue to operate "deep into 2021." Still benefiting from a heightened stock price, AMC's CEO is looking for shareholder approval to issue 500 million shares to raise even more cash for the business.

Sundial Growers' management acted swiftly when its share price rose in January, completing not one but two offerings in February. And so it was no surprise that when the company released its year-end results on March 17, investors saw a big increase in its cash balance. As of March 15, the cannabis company had 719 million Canadian dollars in unrestricted cash on hand -- 12 times the CA$60.4 million it had at the start of the year. With management looking at possible acquisitions, a whole lot more opportunities open up for the business.

Most recently, GameStop announced it would sell up to $1 billion worth of shares. The day the news broke, the stock fell 12% as investors anticipated a drop in the share price as a result of the offering. For GameStop, the stock sale helps the company secure its future and facilitate a move toward e-commerce. Its brick-and-mortar stores are not nearly as competitive when consumers can buy games online.

Since their January ascent, all three of these stocks have plummeted as investors have gravitated toward more value-oriented investments and cashed out their gains: 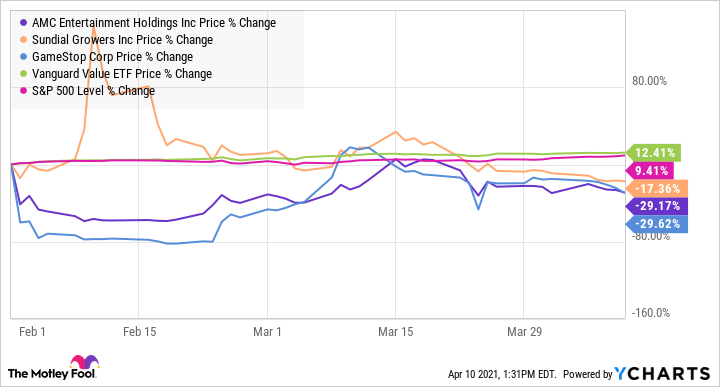 Memes don't last forever, and once the excitement wears off, these investments will cool off too. In fact, this has already begun to happen -- but there is definitely more room for these stocks to fall, given how highly they have soared this year. For investors, it can be a guessing game to determine whether you're buying at the "right" time. Will the stock benefit from another surge in popularity, or will Reddit investors move on to something else?

There is no substitute for fundamental analysis

Whether you are looking at charts to find trends or analyzing what's popular on social media, you are taking a big risk if you try to predict where a stock will go based on its past moves or investor sentiment. The safer route is to stick to fundamentals and invest in businesses that have strong financials and attractive growth prospects for the future.

When shares of BlackBerry skyrocketed earlier this year, I didn't hesitate to dump my holdings in the business because I knew the stock wasn't worth its inflated share price and the rise was likely due to speculation. Although the business isn't in bad shape, it has been struggling to generate growth. A quick exit looked a lot more appealing than hanging on and hoping for what may prove to be a very long recovery.

By understanding a business and its fundamentals, you have a good idea of whether the stock is well-priced, or whether its valuation is obscene and you should take the money and run. Being grounded in fundamentals rather than hype is how you can minimize your losses over the long term, and it's a much safer strategy than going on what could prove to be a wild roller-coaster ride.

2 Stocks Under $5 That Aren't Cheap Buys