Please ensure Javascript is enabled for purposes of website accessibility
Log In Help Join The Motley Fool
Free Article Join Over 1 Million Premium Members And Get More In-Depth Stock Guidance and Research
By Travis Hoium - Apr 14, 2021 at 8:58AM

Streaming is the future of media, and Netflix is the leader everyone's chasing.

Netflix (NFLX -1.96%) is no longer the only game in town in streaming television, and the competition is trying hard to catch up. Walt Disney (DIS -1.24%) is the clear #2 in streaming today, but ViacomCBS, Comcast, AT&T, Amazon, and more are amassing new content to compete.

Why is everyone coming after Netflix's business? The simple answer: Streaming is the future of media, and companies that can't make the transition will be left behind in the streaming stocks race. 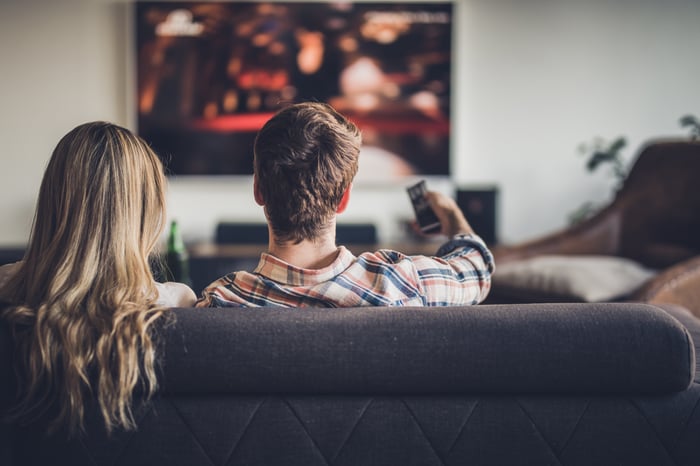 Leaving competitors in the dust

The chart below shows exactly why Netflix is the talk of the media world today. Revenue has increased nearly ten-fold in the last decade, and the company is now one of the biggest power players in the entertainment business. 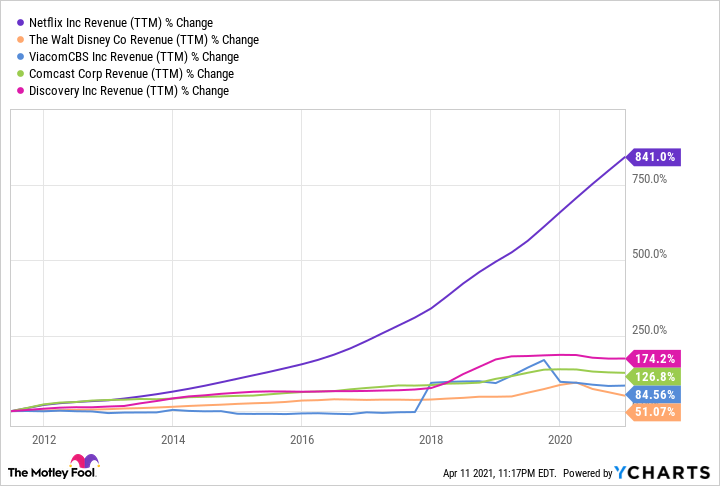 Netflix doesn't generate as much revenue as Disney or Comcast, but it's the trajectory of the business that has captivated investors' attention. And Netflix may have already built the kind of scale that will be tough to overcome.

What's great about the streaming business is how scale can drive both profitability and power on the content side of the business. A streaming service with 100 million users paying $7 per month will invariably be able to spend more on content than a company with 10 million users, even if it's a premium product charging $15 monthly.

For services that can afford to buy more and better content, they become more attractive to new users while remaining stickier with existing subscribers too. Scale is like a flywheel that keeps momentum going once it gets started. Netflix has the flywheel going, and even with the massive libraries some of its competitors can bring to bear, their streaming services may never catch up given how much the company spends annually on new content.

With scale and content comes pricing power. Netflix has long kept prices low, but it's now one of the more expensive streaming options. A streaming subscription started at $8 per month when it was originally launched, but now, a subscription plan with four simultaneous streams and Ultra HD quality costs $17.99. And Netflix is still adding subscribers as it raises prices, proving that it has pricing power in the market.

Netflix is reaping the benefits of its early-mover status after spending a decade building up its collection of original films and series. But Disney, now the biggest competitor to Netflix, is deploying a similar strategy by keeping prices low to build up its subscriber base before slowly ratcheting prices up over time. Right now, these two players look like they're already well ahead of the rest of the industry.

What Netflix is missing, however, is ways to monetize the content it creates beyond streaming. Disney is the best example of a company that leverages its intellectual property over and over with theatrical releases, streaming, theme parks, merchandise, and even cruise lines. This model creates a waterfall of value for the company.

Netflix has expanded into limited theatrical releases to generate some incremental revenue, but it doesn't have a substantial business outside of streaming. This is currently the biggest weakness in Netflix's business model, but it could add complementary opportunities over time as its cash flows grow.

Can anyone catch Netflix?

Given the importance of scale and pricing power in streaming, Netflix is the clear leader that everyone is chasing. Disney has emerged as a formidable challenger with a seemingly endless amount of blockbuster and kids content, effectively creating a duopoly atop the streaming industry. But even as competitors try to claw their way into the business, all comparisons in this space begin and end with Netflix.