Please ensure Javascript is enabled for purposes of website accessibility
Log In Help Join The Motley Fool
Free Article Join Over 1 Million Premium Members And Get More In-Depth Stock Guidance and Research
By Trevor Jennewine - Apr 16, 2021 at 10:00AM

Both of these tech companies have made investors rich.

Amazon (AMZN 0.28%) and Microsoft (MSFT -0.08%) are ranked second and third, respectively, on Fortune's list of Most Admired Companies. That's not surprising. These tech titans have both achieved incredible success, and both have been rewarding investments in the past.

In the last year, shares of Amazon have jumped 65% and Microsoft stock is up 55%. But which is the better buy today?

Amazon has an impressive list of accomplishments: It's the largest e-commerce marketplace in the United States and the second-largest retailer in the world, with over 1.7 million small and medium-sized businesses on its platform. Additionally, Amazon Web Services is the leading provider of public cloud services worldwide, with a 32% market share in the fourth quarter of 2020. 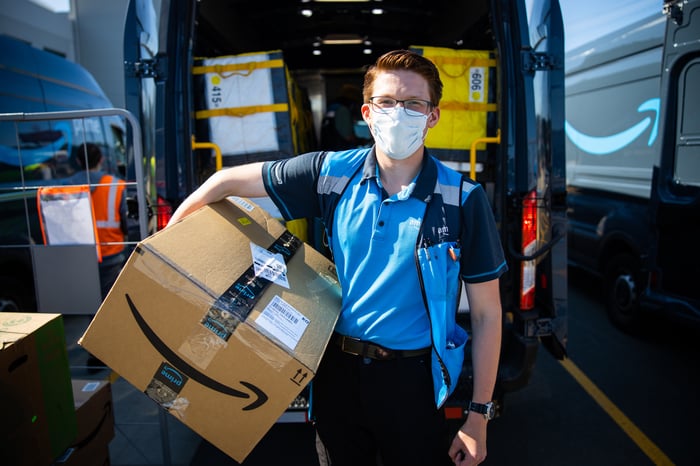 Beyond its core markets, Amazon is also gaining traction in digital advertising. The company's content platforms -- Amazon marketplace, Fire TV, and Twitch -- are valuable real estate in the advertising world and marketers are willing to pay for it. Amazon also provides ad tech platforms to both buyers and sellers, allowing it to profit from ad sales occurring on and off company-owned websites and apps.

In 2020, Amazon's digital ad revenue reached $15.7 billion, according to eMarketer. That represents 10.3% of the U.S. digital ad market, putting the company in third place behind Alphabet's Google and Facebook. Notably, Amazon has gained significant ground since 2018, when its ad business generated $9.9 billion, taking a 6.8% market share.

Despite its massive size, Amazon remains well positioned for growth in its core markets. The company recently signed an exclusive 10-year deal with the NFL to bring Thursday Night Football to Amazon Prime Video. This partnership should drive growth in Prime memberships and help Amazon expand its digital ad business.

Microsoft has an equally impressive background. The Microsoft 365 suite includes industry-leading applications like Word, PowerPoint, and Excel, which have helped the company capture nearly 90% of the market for office productivity software. 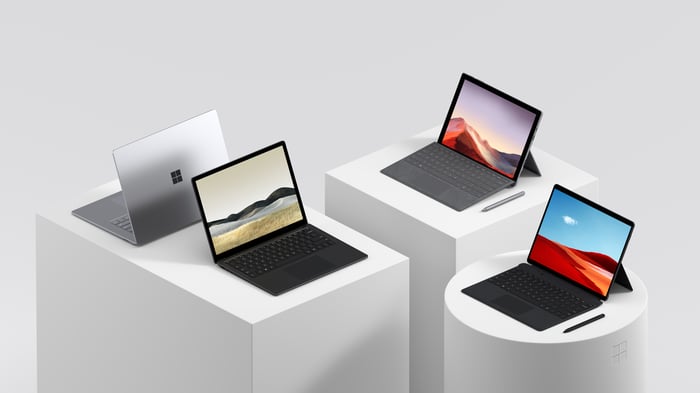 Notably, Microsoft is driving this growth through continued investments in data center infrastructure, as well as by expanding its service offerings, particularly in the areas of artificial intelligence, data analytics, and developer tools.

Finally, gaming has become a sizable part of this tech titan's business. In fact, gaming revenue reached $9.6 billion in fiscal 2020, representing just under 7% of Microsoft's total sales. And through the first half of 2021, gaming revenue is up 38%, driven by strong Game Pass subscription sales and the highly successful launch of the Xbox Series X and S.

As a whole, Microsoft's financial performance has been impressive in recent years, especially for an enterprise of its size.

As a final thought, unlike Amazon, Microsoft pays a dividend. Currently, the dividend yield sits at 0.84% -- not much compared to some stocks, but with Microsoft's deep pockets, this dividend is as close to a sure thing as you're likely to find.

Going forward, Microsoft is primed for growth. Digital transformation efforts should be a tailwind for its productivity software and cloud computing businesses. And as video games and esports become more popular with consumers, Microsoft may be able to build its gaming business into a third massive revenue stream.

Personally, I don't think you can go wrong with either of these companies. Both have achieved nearly unmatched success, and both benefit from strong competitive positions, healthy balance sheets, and big market opportunities.

That being said, Amazon wins this contest. The company is growing more quickly, and its dominant position in cloud computing gives it an advantage. Moreover, Amazon's digital ad business is rapidly taking market share, making it a major player in yet another massive industry. I think that leaves more long-term upside for investors.