Please ensure Javascript is enabled for purposes of website accessibility
Log In Help Join The Motley Fool
Free Article Join Over 1 Million Premium Members And Get More In-Depth Stock Guidance and Research
By Timothy Green - Apr 16, 2021 at 7:35AM

The graphics chip company views the data center as a big opportunity.

When graphics chip specialist NVIDIA (NVDA 1.11%) announced the $40 billion acquisition of Arm Holdings, it was a foregone conclusion that the company was going to try to extend its reach beyond GPUs. While that acquisition still needs to get past regulatory scrutiny, NVIDIA is wasting no time.

NVIDIA unveiled its first data center CPU earlier this week. The NVIDIA Grace CPU is an Arm-based processor aimed squarely at artificial intelligence and high-performance computing workloads. NVIDIA is claiming that the CPU can deliver a tenfold performance boost over existing server chips in some cases. 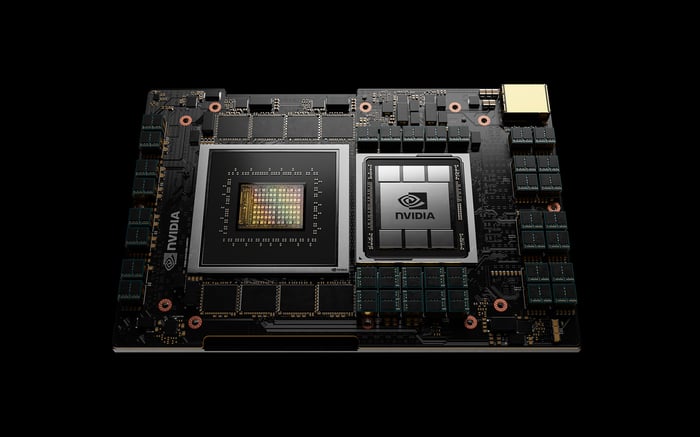 Intel (INTC 0.82%) is the dominant leader in the server chip market. Chips based on the x86 instruction set are the industry standard, and Intel and rival Advanced Micro Devices are the only options.

Other companies have tried to make Arm-based servers a thing, and they've all failed miserably. Qualcomm, a leader in mobile chips, gave up on its quest to provide an alternative to Intel's server chips after the company failed to gain any traction. Qualcomm is now trying to sell server chips aimed at specialized tasks like AI, a much smaller market opportunity.

Intel makes a lot of money selling server chips, and that hasn't changed even as AMD steals market share. Intel generated $26 billion of revenue and $10.6 billion of operating income from its data center segment in 2020. The lack of alternatives means sky-high margins for Intel.

NVIDIA isn't going after the entire server chip market, at least not right now. In its press release announcing the Grace CPU, the company was explicit in saying that "the vast majority of data centers are expected to be served by existing CPUs." Grace "will serve a niche segment of computing."

Going after AI workloads makes a lot of sense for NVIDIA. The company already dominates the market for data center GPUs, which are used for computationally intensive workloads that CPUs aren't well suited for. NVIDIA can get its foot in the door with Grace and build out an ecosystem around its CPUs. Once Arm-based server chips have a foothold, chipping away at Intel's dominance will be an easier task.

Grace won't be available until 2023, so Intel doesn't have anything to worry about just yet. But NVIDIA has managed to secure two supercomputer deals for its new CPU, a big vote of confidence in the company's efforts. The Swiss National Computer Center will use NVIDIA's Grace CPUs and its next-generation GPUs to power Alps, a new supercomputer set to go online in 2023. Los Alamos National Laboratory also has plans for a Grace-powered supercomputer.

The days of NVIDIA being primarily a gaming-focused company are long gone. The data center business is now nearly as big as the gaming business, generating about $1.9 billion of revenue in the most recent quarter. With NVIDIA able to offer a server CPU come 2023, the company's total addressable market will expand by billions of dollars annually.

NVIDIA will still need to build an ecosystem around these chips, and customers will need to commit to an architecture that has little presence in the data center. But NVIDIA is playing the long game, and there's a good chance the company will be able to carve out a portion of the data center CPU market for itself.