These three dividend stocks form the foundation of an economic boom.

Basic materials companies are the unsung heroes of an economic recovery. While vulnerable to times of slowing growth, many of these companies are first in line to benefit from rising industrial production. Demand for everything from chemicals, to plastics, to metals and minerals is rising. And that makes the materials sector worth a look.

With that, we asked some of our contributors which basic materials stocks they thought stood out from the pack. They chose Celanese (CE -1.61%), Linde (LIN -0.73%), and Sherwin-Williams (SHW 5.06%). Here's why each company is worth adding to your portfolio right now. 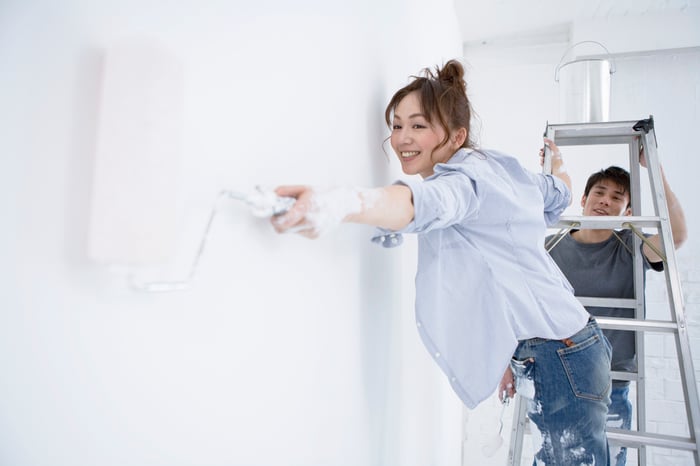 Lee Samaha (Celanese): Global chemical and specialty materials company Celanese isn't a household name, but its products are everywhere. It produces intermediate chemicals used in a wide range of industries, including coatings, paints, adhesives, pharmaceuticals, automotive, consumer electronics, electrical appliances, and even food. In other words, Celanese processes raw materials into intermediate chemicals, which manufacturers then use to make finished products. As such, it's a near-term play on an economic recovery, and in particular the industrial economy, and it's also a medium-term play on the completion of its strategic targets through 2023.

Rising raw material costs are a concern, but Celanese tends to have long-term supply agreements and forward purchase contracts in place to mitigate the risk. Moreover, chemicals suppliers usually pass on price increases if end demand is strong enough, and with a recovering economy, that should be the case in 2021.

Moreover, the operational enhancements made at the company over the last decade mean that Celanese's FCF substantially covers its dividend. As you can see below, FCF per share was markedly higher in the challenging year of 2020 than it was through nearly all the decade.

Don't be surprised if the company raises its dividend, makes more share buybacks, or invests in new projects or acquisitions to boost revenue growth beyond 2023. Celanese looks like an excellent value option to play a cyclical recovery in 2021 and beyond. 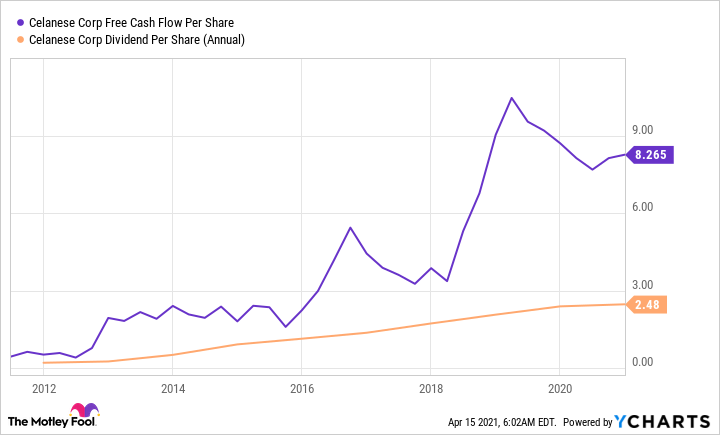 Time to gas up with a proven materials powerhouse

Scott Levine (Linde): Unlike the latest electric vehicle or cryptocurrency stocks, materials stocks often aren't the ones found in the headlines of business articles. But investing isn't a popularity contest; there's no reason to believe that your most successful investments have to be easily recognizable names. Take Middleby, a manufacturer of commercial cooking equipment, for example. Far from a household name, Middleby's stock has skyrocketed more than 15,000% over the past 20 years while the S&P 500 has risen 252%.

Now, consider the materials maven Linde. A global purveyor of industrial gases and engineering solutions, Linde is a materials company that people are unlikely to be discussing around the dinner table, yet it's a stock that has outperformed the market considerably over the past 20 years, climbing more than 1,100%. And there's good reason to believe the company will continue its impressive performance in the future. Since merging with Praxair in 2018, Linde has grown to be the top dog in its field as the world's largest producer of industrial gases. Its proficiency in engineering solutions, moreover, helps to distinguish it from competitors. From oil and gas, to energy storage, to hospitality, a wide range of industries rely on Linde's solutions.

One area in particular that I find compelling is its exposure to the burgeoning hydrogen economy. Whereas fuel cell companies like Plug Power and FuelCell Energy are positioning themselves to play prominent roles as hydrogen occupies a greater position on our energy landscape, as investments they are fraught with risk as they haven't proven that their endeavors can be profitable. Linde, on the other hand, is a mature company that doesn't rely so singularly on the growing emphasis on hydrogen, yet still stands to benefit considerably from it, especially considering its position. The company, for instance, proclaims that it's "the only company to cover every step in the hydrogen value chain from production and processing (including purification and liquefaction) through distribution and storage to everyday industrial and consumer applications" -- a fortuitous position for a potential multi-trillion opportunity. Illustrating its sought-after prowess in hydrogen, Linde announced last month that it had inked a deal to supply hydrogen and the related infrastructure to help power the world's first hydrogen-powered ferry, located in Norway.

While the hydrogen narrative plays out, investors can expect the company to prosper nonetheless. In 2020, for example, Linde reported adjusted EPS of $8.23, a 12% increase year over year, and management expects the bottom line to grow further in 2021, forecasting adjusted EPS of $9.10 to $9.30. The company plans to announce results from the first quarter of 2021 in early May -- an event interested investors would be wise to follow.

Paint your portfolio with profitability

Daniel Foelber (Sherwin-Williams): As Scott mentioned, materials companies rarely capture the spotlight like other sectors do. But Sherwin-Williams deserves some time in the sun. It has spent the last 10 years doing what it does best: crushing the market and raising its dividend. The company has raised its dividend for 40 consecutive years, making it a Dividend Aristocrat. There's just one issue: Its dividend yield is now only 0.9%. But this is because its share price has risen faster than the company can increase its quarterly payout, which is a great problem to have if you're a shareholder of Sherwin-Williams. To make it easier for investors to buy its stock, Sherwin-Williams issued a 3-for-1 stock split that went into effect on April 1. The stock split doesn't shrink the value of the Sherwin-Williams pie per se, it only triples the number of slices.

Sherwin-Williams' long-term success can be attributed to its high profitability across different markets. Its overall gross profit margin is consistently above 40% -- and it finished 2020 with a record-high operating margin of 15%. A 15% operating margin means Sherwin-Williams is pocketing $0.15 of every $1 it brings in. Few industrial or material companies are that efficient. 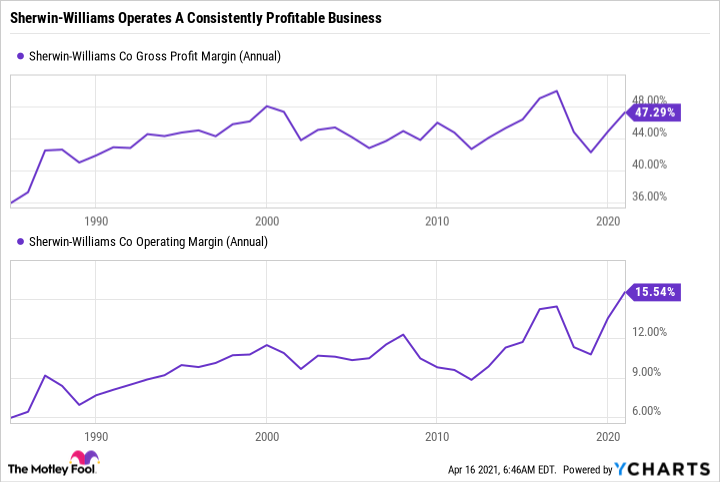 The pandemic is a great example of how Sherwin-Williams' three business segments work together to grow sales and net income. The company's Americas group, its largest division, consists of Sherwin-Williams-branded products for commercial and residential customers. Despite COVID-19-related challenges affecting its retail outlets, the division benefited from DIY home improvement projects. The consumer brands group, which holds non-Sherwin-Williams brands sold at Lowe's and other retail outlets, grew sales by 14% last year. Performance coatings, which is tied to industrial manufacturing and production, was hit hard by an economic slowdown but recovered well toward the end of the year. All in all, Sherwin-Williams was able to grow its adjusted EPS by 16% and generate a record-high $18.4 billion in revenue. In 2021, it expects the narrative to change, with the Americas group and performance coatings leading a 9% increase in adjusted EPS even after a strong 2020.

Simply put, Sherwin-Williams is exposed to a lot of different sectors of the economy, giving it a business that can perform during good times and bad.