Please ensure Javascript is enabled for purposes of website accessibility
Log In Help Join The Motley Fool
Free Article Join Over 1 Million Premium Members And Get More In-Depth Stock Guidance and Research
By Scott Levine - Updated Apr 19, 2021 at 11:10AM

You may have renewable natural gas to thank for helping deliver your next Prime package.

Amazon (AMZN 0.73%) just passed another mile marker in its drive to achieve net zero carbon across its businesses by 2040. Clean Energy Fuels (CLNE 3.04%) announced this morning that it will provide Amazon with low- and negative-carbon renewable natural gas (RNG) at 27 of its current fueling stations. And it has another 19 fueling stations that it plans to open by the end of 2021 that will also provide Amazon with RNG. In total, Clean Energy's new and future stations will supply Amazon in 15 states.

Speaking about the agreement, Andrew Littlefair, CEO of Clean Energy Fuels, said, "If the world is really going to tackle the issue of climate change, all of us need to find solutions that work both environmentally and economically, and that is exactly what this agreement supports." The company's RNG is derived from methane produced by the breakdown of organic waste in landfills, large dairy farms, and sewage plants. 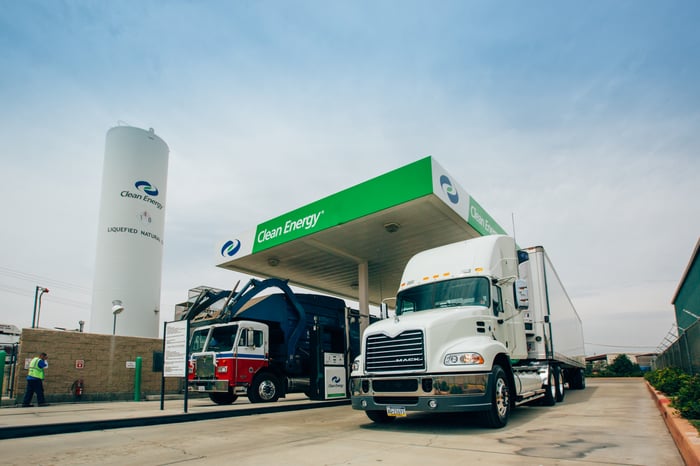 In addition to the fueling agreement, Clean Energy Fuels has provided Amazon with a warrant to purchase up to 53,141,755 shares of stock. With the signing of the fuel agreement, the first 13,283,445 shares of the warrant have been vested. The remaining shares will vest over time based on discretionary fuel purchases by Amazon and its affiliates, up to a total of $500 million.

The fueling agreement with Clean Energy Fuels is a logical follow-up to Amazon's action earlier this year to reduce the carbon footprint of its delivery fleet. In February, Amazon ordered more than 1,000 vehicles sourced with engines from a joint venture with Cummins and Westport Fuel Systems.