Please ensure Javascript is enabled for purposes of website accessibility
Log In Help Join The Motley Fool
Free Article Join Over 1 Million Premium Members And Get More In-Depth Stock Guidance and Research
By Patrick Bafuma - Apr 19, 2021 at 9:05AM

How much will the healthcare giant suffer, and what does this mean for worldwide vaccination efforts?

Earlier this week, it was announced that injections of the Johnson & Johnson (JNJ 1.95%) COVID-19 vaccine would be paused, due to six cases of a rare type of blood clot. The company's single-dose vaccine also had its rollout in the EU delayed, and was paused in South Africa as well.

Fortunately, as of April 14, almost a quarter of the U.S. population was fully vaccinated, and around 40% of the population had received at least one dose. As of the same date, according to a White House briefing, the J&J vaccine had accounted for fewer than 5% of the over 190 million recorded doses in the U.S. 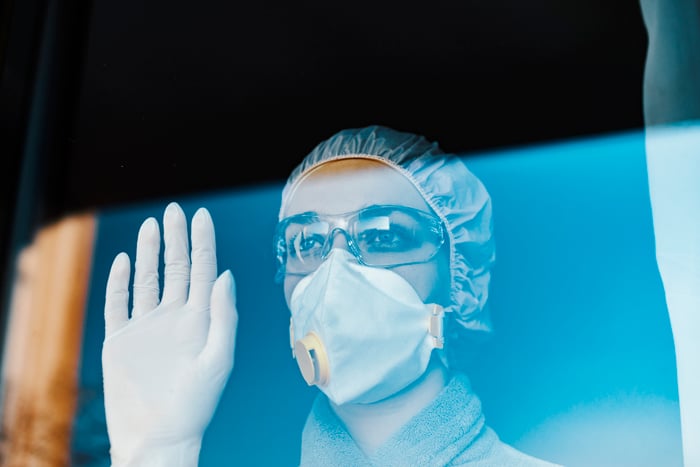 What does this mean for Americans?

The U.S. is fortunate to have two other companies, Moderna (MRNA -2.36%) and Pfizer (PFE 1.58%), enjoying successful launches of their coronavirus vaccines. The U.S. also is among the top seven countries worldwide in percentage of the population both partially and fully vaccinated. (For single doses, it trails only Seychelles, Bhutan, Israel, Maldives, the U.K., and Chile; for full vaccination, only Israel, Seychelles, Bahrain, Chile, and San Marino have done better per capita.)

Despite the Johnson & Johnson setback, the U.S. vaccine program is actually accelerating -- currently averaging 3.3 million vaccinations per day, up from the seven-day average of 3 million doses per day at the beginning of April. As Dr. Anthony Fauci reported at the April 14 White House press briefing: "[W]e have more than enough supply of Pfizer and Moderna vaccines to continue the current pace of vaccinations ... and continue to reach every adult who wants to be vaccinated by the end of May."

In light of all this, it seems that life within the U.S. may return to a semblance of pre-pandemic normal sooner rather than later.

What does this mean for J&J investors?

Johnson & Johnson had previously said it would make its vaccine available on a not-for-profit basis for use during the pandemic. While it was aiming to deliver 100 million doses to the U.S. government by the end of May 2021, that goal may be in jeopardy now. As it seems that the U.S. will be able to meet demand with the Pfizer and Moderna vaccines, the J&J vaccine would only help to accelerate vaccination or provide the public with an alternative option (or both).

Johnson & Johnson is an enormous company, with $82.6 billion in 2020 sales -- $22.5 billion in the fourth quarter of 2020 alone. The company is charging about $10 per COVID-19 vaccine dose in the U.S. and EU. If it provided 100 million doses in the U.S., its coronavirus vaccine could still be a blockbuster, but vaccines typically have lower margins than other pharmaceutical products -- and $1 billion would be less than a 2% increase in Johnson & Johnson's sales for 2021.

However, once you add in South Africa, where Johnson & Johnson's is the only vaccine available (though still paused) and its population of near 60 million -- and a portion of the EU population, if its vaccine is approved there -- it's possible that the company could see another $4 billion to $5 billion in sales in 2021.

With fewer than one in a million patients developing a rare type of blood clot, I suspect that the current decisions by the Food and Drug Administration and the Centers for Disease Control do, in fact, represent a pause of J&J vaccinations rather than a hard stop. While some individuals or organizations may have an option of which type of COVID-19 vaccine they receive, many individuals or countries may not, as attempts to vaccinate whole populations are expedited.

Because of the urgency of a worldwide pandemic and the J&J vaccine's high level of safety, I suspect it will continue to be administered and coveted worldwide.

While Johnson & Johnson's vaccine will help expedite vaccination efforts in the U.S., a one-and-done vaccine will be especially useful in many parts of the world. Worldwide, 83% of injections so far have been administered in high- and upper-middle-income countries. Fewer than 1% of doses given have been administered in low-income countries., and that leaves a lot of potential recipients. Given the ease with which COVID-19 spreads, the sooner mass vaccinations occur worldwide, the sooner investors in international and travel stocks can breathe easier.