Please ensure Javascript is enabled for purposes of website accessibility
Log In Help Join The Motley Fool
Free Article Join Over 1 Million Premium Members And Get More In-Depth Stock Guidance and Research
By Courtney Carlsen - Apr 21, 2021 at 8:48AM

The investment bank blew analysts' expectations out of the water.

Goldman Sachs (GS -1.16%) shattered expectations when it announced its first-quarter earnings last week. The bank posted stellar earnings thanks to an improving economy that allowed it -- along with many of the other big banks -- to reduce its provisions for credit losses, or the reserves it built up amid the pandemic last year.

The strong quarter reinforced Goldman's position as a global leader in mergers and acquisitions and equity underwriting, and the strong IPO market helped boost its investment banking segment, leading to record profits. While investment banking led the way, the bank was strong across all of its segments, citing improving economic conditions in the United States and globally. Here are four things investors learned from Goldman Sachs's record earnings period.

Goldman Sachs posted a record quarterly net revenue of $17.7 billion, representing 102% growth from the same period last year. This was driven by strong earnings across all segments.

Investment banking revenue was up 73% from last year, bringing in a record $3.8 billion thanks to higher revenue from mergers and acquisitions and increased underwriting activity. A hot market for initial public offerings and other fundraising activities helped the bank see gains of $2.6 billion in its private equity book value, further cementing its leading position in M&A and equity underwriting. 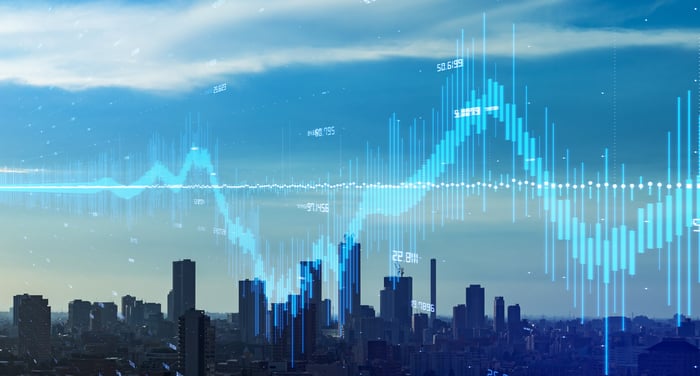 The bank also saw its global markets revenue jump to $7.6 billion, up 73% from last year and its highest quarterly earnings from this segment since 2010. Its asset management segment also posted a record quarter, with $4.6 billion in revenue after a $96 million loss in the same quarter last year.

Stellar growth was to be expected given the year-over-year comparisons. That's because first-quarter earnings last year reflected the huge loss reserves recorded by the bank to prepare for the uncertainty of the coronavirus pandemic and its impact on the economy. As these loss provisions are unwound, record earnings are being seen all across the banking sector.

Regardless, the bank still blew analysts' expectations out of the water, beating expected EPS by 82% and expected revenue by 41%.

2. Optimistic about the future, with a word of caution

Management expressed optimism about the future of the economy. CEO David Solomon said that there is meaningful pent-up consumer demand, and that we should see "very robust economic growth in the second half of 2021 and 2022 as vaccines continue to accelerate."

The fundamentals of the economy are continuing to improve, with the unemployment rate falling, consumer spending picking up, and confidence in the economic recovery increasing. For this reason, Goldman Sachs was able to release a large amount of the $937 million it had reserved for credit losses, providing a $70 million benefit to the income statement.

The bank expressed a word of caution, however, saying that the monetary and fiscal actions taken in the past year pose an increasing risk of inflation. Solomon said, "There is no question that we will see an increase in inflation. The question is how much, how quickly, and how we respond to that."

Solomon said it's far too early to speculate, but in the event inflationary pressures accelerate sooner than expected, actions taken by the bank would create headwinds for the business. While not a threat on the near-term horizon, inflation is still a risk for markets that the bank is keeping a close eye on.

3. Continuing its expansion into consumer banking

During the first quarter, the company saw its consumer banking revenue increase 32% to $371 million thanks to higher credit card loans and deposit growth.

The push into the consumer banking segment is an effort to reduce Goldman's reliance on volatile trading and investment banking revenue, and smooth out its earnings over time. The bank probably feels increasing pressure to boost its presence in the consumer banking segment after competitor Morgan Stanley acquired E*Trade and Eaton Vance last year.

4. Still trading at a cheap valuation

Goldman already appeared to be cheap, and after its record first quarter it looks even cheaper. As of Tuesday's close, the stock was trading at a price-to-earnings ratio of 8.2 -- fairly low for the bank over the past 10 years. The bank also has a price-to-book ratio of 1.3, meaning it's priced slightly above the value of its assets.

Goldman Sachs skillfully navigated the pandemic last year, saw strong growth across multiple segments, and expects its good earnings to continue. The second quarter will likely be another stellar earnings period, and year-over-year comparisons are sure to be impressive again given that Goldman's net income bottomed in the second quarter last year. The second half of the year will likely see slower growth rates, however, with the bank preparing for inflation expectations and a potentially shifting economic environment.