Please ensure Javascript is enabled for purposes of website accessibility
Log In Help Join The Motley Fool
Free Article Join Over 1 Million Premium Members And Get More In-Depth Stock Guidance and Research
By Eric Volkman - Apr 21, 2021 at 11:24AM

Fancy a subscription to high-end podcasts or a purple iPhone 12?

In its latest "event" (i.e., new product introduction) on Tuesday, Apple (AAPL 1.62%) unveiled a host of fresh products, most of which were improvements on existing offerings rather than entirely new goods.

Arguably the most impressive new hardware was the company's latest iMac desktop. This comes in a range of bright colors (seven in total) and is the thinnest iMac yet. More importantly, it is powered by Apple's recently introduced, proprietary M1 chip. 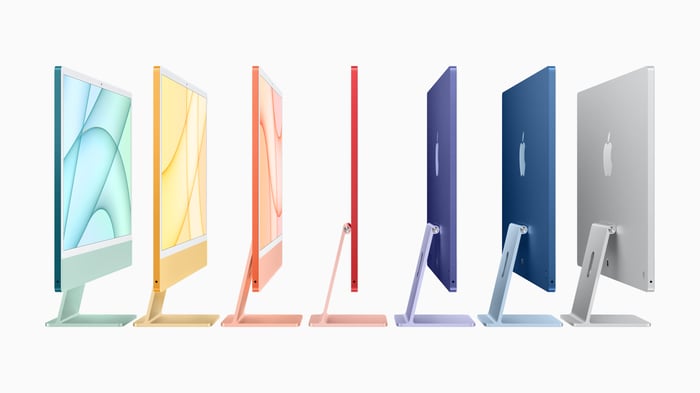 Apple also took the wraps off its new iPad Pro, which like the iMac has an M1 in its guts. Promising a "massive leap in performance," among other improvements, this model boasts a Liquid Retina XDR display, and an ultrawide-angle front camera.

Other product evolutions cover the Apple TV 4K, which has a new remote that is more suited to navigating on-screen options, and a purple color option for both the iPhone 12 and iPhone mini. One new item is the AirTag, a tracking device that hooks into the company's Find My ecosystem, allowing users to keep tabs on their valuables.

Another fresh offering are Apple Podcasts Subscriptions, described as "a global marketplace for listeners to discover premium subscriptions offered by their favorite creators," in addition to a vast and intimidating number of free-to-listen shows.

Lastly, there's Apple Card Family. This allows holders of the eponymous credit card to establish a "family sharing group" that combines their credit lines, and permits co-management between two members of that group.

While none of these individually feels as if it'll be a game-changer, it's encouraging to see the company continue striving to innovate and keep its lineup fresh. Apple-watchers should pay particular attention to feedback about the machines powered by the new(ish) M1; the company has pinned a lot of hope on that chip.