An upsurge in the global pandemic is stoking fear.

Wednesday brought some relief to Wall Street as major market benchmarks regained some of their recent losses. At 11:30 a.m. EDT the Nasdaq Composite (^IXIC 0.00%) had managed to gain more than half a percent on the day, clawing back some of its declines on Monday and Tuesday. The rise came despite considerable downward pressure on the Nasdaq from Netflix, whose earnings report late Tuesday sent its stock down sharply.

Some of today's support for the Nasdaq came from outside the tech industry. Railroad company CSX (CSX 1.33%) reported encouraging results that sent its stock sharply higher. However, fitness equipment maker Peloton Interactive (PTON -2.50%) wasn't as fortunate, and some investors worry that the company might not be able to recover from recent safety concerns as quickly as initially hoped.

Shares of CSX were up almost 4% on Wednesday morning. The railroad giant had some encouraging things to say about its first-quarter performance, even as the economy still has a long way to go before recovering fully.

CSX's numbers held up reasonably well. Revenue for the quarter was down 1% year over year, with gains in intermodal shipments and fertilizer offset by steep drops in automotive, chemical, and metals shipments. Trends in efficiency metrics like train velocity and delays at major terminals weren't entirely favorable, but labor productivity rose significantly, and the long-term gains in operational efficiency remain impressive. Earnings per share fell 7% to $0.93.

However, CSX noted that weather conditions in the first quarter were especially challenging. The railroad operator is still poised for considerable growth as it gets ready to handle higher volumes once the economy reopens fully.

The railroad industry is going through transformative change right now, especially as major Canadian railroads fight over the possible acquisition of Kansas City Southern (KSU) and its access to key routes in the U.S. and Mexico. CSX will have to respond accordingly, but it stands to benefit from a return to economic strength. 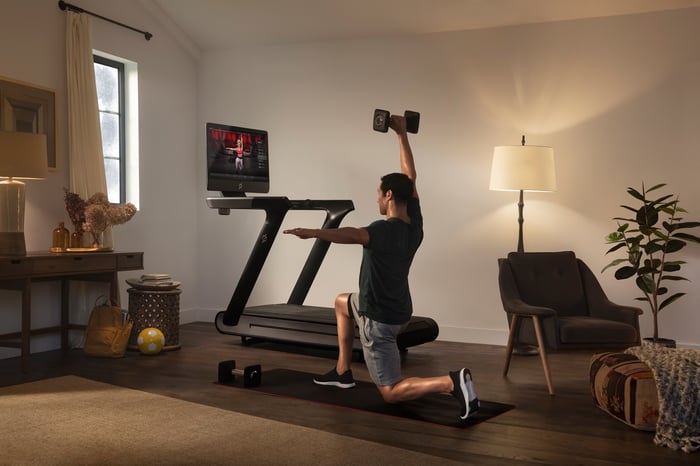 Does Peloton face an uphill climb?

Meanwhile, Peloton Interactive's shares dropped another 4% on Wednesday morning, adding to losses from earlier in the week. The stock has fallen to nearly $100 per share, a level below which it hasn't closed since last September.

The decline earlier this week came amid reports that government regulators might seek to have Peloton recall its treadmill due to safety concerns. The U.S. Consumer Product Safety Commission cited several dozen incidents in which children or household pets became trapped under the treadmill's rollers, including one in which a child died. Peloton CEO John Foley vehemently disagreed with the safety assessment, arguing that the treadmill is safe as long as users and household members follow warnings and safety instructions.

However, some analysts argue that the downturn in the stock is a buying opportunity. Even after the report, analysts at Stifel stood behind their price target of $170 per share, arguing that Peloton will be able to appease regulators and improve safety.

Many shareholders are more concerned that postvaccine reopening could send more people back to the gym and discourage further purchases of Peloton equipment. Those worries could keep a lid on the stock until investors can see actual results and watch for trends among consumers.

2 Winning Nasdaq Stocks You Probably Forgot All About

What Investors Missed in the Stock Market Last Week

The Boeing Co. Lands Another Multibillion-Dollar Commitment at Airshow

Can Transports Send the Dow to New Record Highs?

Why You Simply Can't Ignore Dividend Stocks in Today's Market