Stop me if you've heard this before: U.S. stocks continued to fall as oil prices plunged lower. In fact, for the first time in 12 years, oil prices ended the day below $30 a barrel. The Dow Jones Industrial Average (DJINDICES: ^DJI) and the S&P 500 (SNPINDEX: ^GSPC) were down 2.25% and 2.18% last week, respectively, and have moved more than 8% lower in the new year. 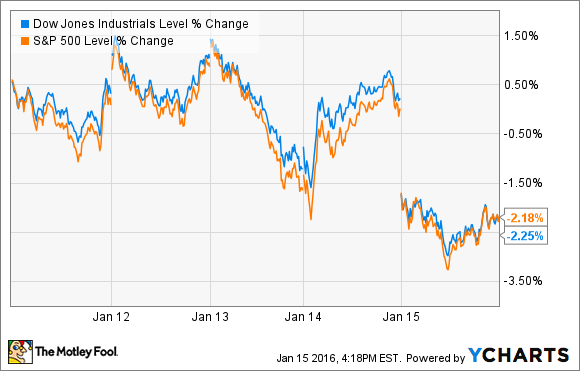 Kate Warne, investment strategist at Edward Jones, put it nicely. "It's very frustrating and painful day to day," Ms. Warne said, according to Morningstar. "When stocks start dropping, investor fears increase, which leads to more drops in the short term."

What she said. Here are some of the more interesting developments from last week in the stock market.

Two automakers; two strategies
Investors have been consumed by the fear of reaching "peak auto sales" in the U.S. auto market, and because of that, shares of General Motors (NYSE: GM) and Ford Motor Company (NYSE: F) have sold off to start the new year. Despite many investors shying away from owning shares of Detroit's two-largest automakers, the companies rewarded shareholders in the form of dividends last week.

General Motors announced it increased its quarterly dividend by 6%, to $0.38 per share. Its Board of Directors also increased the company's authorization for share buybacks by $4 billion, bringing the total approval to $9 billion through 2017.

However, to me, it says to me that the company is considering starting up a big share-repurchase plan with its stock trading at less than $12.00 -- that would be a good way to spend its cash, currently.

Outside of the automotive industry, there was plenty of pain around the market. Alcoa (NYSE: AA) traded nearly 14% lower last week after reporting disappointing fourth-quarter results. The company's margins declined in all four of its reporting segments, and profits were down significantly thanks to falling alumina and aluminum prices, which declined by 43% and 28%, respectively. It wasn't exactly new news for Alcoa investors, as it's the third consecutive quarter that profit margins declined, and most analysts are predicting that to continue in the near term.

Unfortunately for Alcoa investors, the challenges that the company faces are largely out of management's control. For instance, the company is facing headwinds from plunging commodity prices, an economic slowdown in China, and unfavorable currency translation. Expect the pain to continue in the near term with earnings continuing to drop lower.

Declining commodity and oil prices also affected railroads negatively. On Tuesday, CSX Corp (NASDAQ: CSX) announced its fourth-quarter revenue fell by 13%, thanks in large part to a 32% decline in its coal volumes -- a headwind facing the entire railroad industry to some degree.

Though its revenue declined double digits, CSX actually managed to beat Wall Street expectations for earnings because of fuel costs being lower. CSX reported earnings per share of $0.48 per share, down from last year's $0.49 per share, but ahead of analyst estimates of $0.46 per share. That earnings beat may not be much consolation to investors hoping 2016 would be a better year than 2015.

"With negative global and industrial market trends projected for 2016, full-year earnings per share are expected to be down compared to 2015," said Chief Executive Michael J. Ward, according to Morningstar.