Please ensure Javascript is enabled for purposes of website accessibility
Log In Help Join The Motley Fool
Free Article Join Over 1 Million Premium Members And Get More In-Depth Stock Guidance and Research
By Will Healy - Apr 22, 2021 at 10:15AM

At first glance, Nokia (NOK 1.08%) might seem like an attractive 5G investment. Its $4 share price is over 93% below its all-time high, and the company could engineer a comeback as a telecom equipment provider. However, such thinking could lead investors to miss the opportunity in Qualcomm (QCOM -3.30%). Qualcomm stock has gained significant traction over the last year, and both market and financial factors indicate its 5G growth may have only just begun. 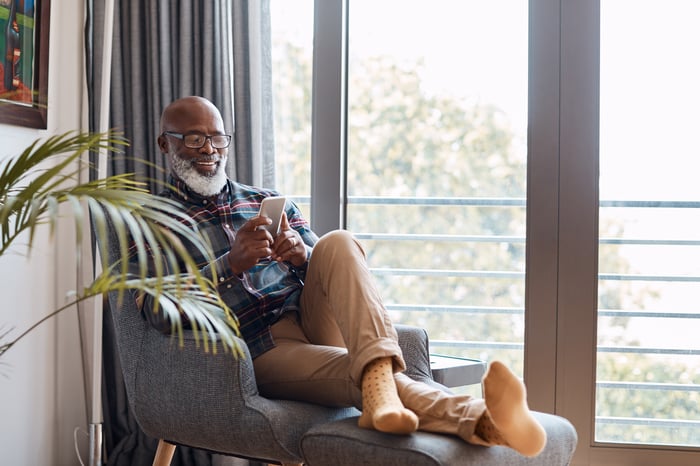 Qualcomm owns the most extensive portfolio of wireless patents worldwide. Unlike Nokia, which must compete with the likes of Ericsson and Juniper Networks, these patents place Qualcomm in a dominant market position. Thanks to its influence in the chipset market, smartphone users cannot gain access to 5G without somehow going through Qualcomm.

Grand View Research forecasts a compound annual growth rate (CAGR) of 63% for smartphone chipsets. As market conditions stand now, all of that benefit accrues to Qualcomm.

The Federal Trade Commission (FTC) sued Qualcomm over this monopoly power, as did companies such as Apple (AAPL 1.62%). However, Qualcomm's attorneys persuaded an appeals court to overturn the previous "monopoly" ruling, and Apple eventually dropped its lawsuits against the wireless chip giant.

Still, these threats have so far done little to stop Qualcomm. For the first quarter of fiscal 2021, GAAP revenue increased 62% compared to the same period last year. Since operating expenses rose by only 14% during this time, net income surged by 165%. Revenue shot higher by only 35% during fiscal 2020 and by 73% from year-ago levels in the fourth quarter, showing a significant improvement in 5G revenue growth after Apple released its 5G iPhone last fall.

Qualcomm's growth also brought it $2.7 billion in free cash flow in the previous quarter alone. This left the company easily able to cover $141 million in interest payments. Moreover, its $15.7 billion in total debt, while significant, does not pose a threat to its balance sheet.

The cash flow also covered the quarterly dividend payout of $739 million, or $0.65 per share. That totals $2.60 annually, for a cash return of about 1.9%. While not high, this payout significantly exceeds the S&P 500 average dividend cash yield of about 1.4%.

The success has also helped Qualcomm stock gain just under 90% over the last 12 months. Thanks to this increase, it compares favorably to Nokia, which has risen by nearly 30% over the same period. 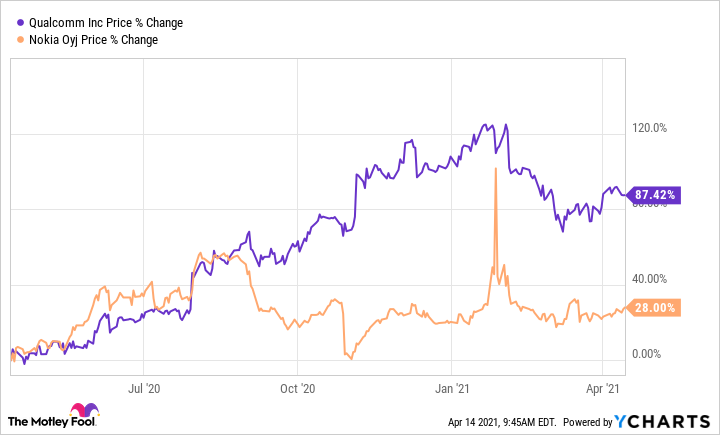 Despite this substantial rise, Qualcomm's P/E ratio comes in at about 23. This takes the earnings multiple close to the lows of last year, when the shares had fallen amid a massive drop in tech stocks. Additionally, prospective competitor NVIDIA sells for approximately 90 times earnings, making Qualcomm a more appealing alternative. Qualcomm even sports a lower multiple than Nokia, which sells for about 26 times its earnings.

Market dominance and a low multiple make Qualcomm one of the more lucrative 5G stocks. While Nokia sells for a low nominal price, its stock growth and market position do not compare well to Qualcomm.

Admittedly, if a peer can finally develop a competing chipset, it could cool growth in Qualcomm stock. Nonetheless, the 5G upgrade cycle looks poised to continue. Even if NVIDIA, Apple, or another company can gain some market share, the massive growth in the smartphone chipset market should keep Qualcomm moving higher.