Please ensure Javascript is enabled for purposes of website accessibility
Log In Help Join The Motley Fool
Free Article Join Over 1 Million Premium Members And Get More In-Depth Stock Guidance and Research
By Daniel Foelber, Scott Levine, and Lee Samaha - Apr 24, 2021 at 10:30AM

This basket of growth and income stocks could propel your portfolio to the stars.

Ah, tax refunds. A refreshing sign you paid more than you owed to the government. While not necessarily "free money," an unexpectedly large tax refund can provide the rocket fuel needed to propel your portfolio to new heights. Whether it's growth or dividend names, investing your tax refund in the stock market could be a wise move for generating long-term wealth.

With that, we asked some of our contributors which aerospace companies they thought were good buys now. They chose AAR Corp. (AIR 1.01%), Raytheon Technologies (RTX 1.08%), and Virgin Galactic (SPCE -0.46%). 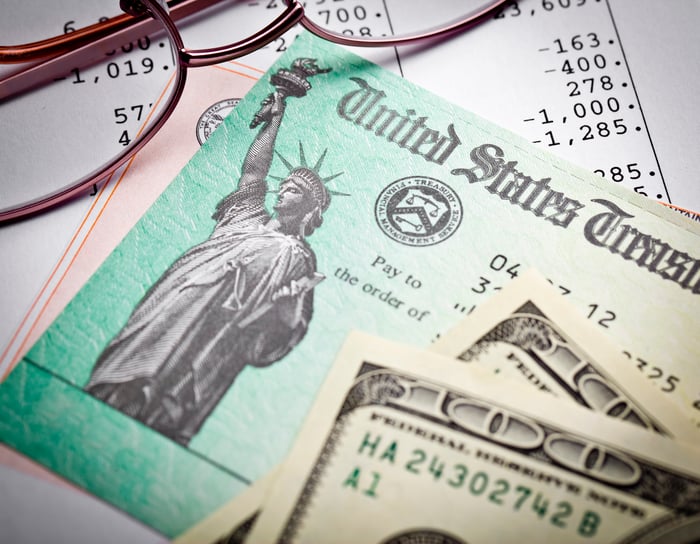 Off we go into the wild blue yonder

Scott Levine (AAR Corp): Maybe it's your interest in Ingenuity, NASA's helicopter taking flight in the Martian sky, or maybe it's your belief that air-affiliated stocks are poised to pop with air passengers becoming more comfortable with traveling by plane during the global pandemic. Whatever your motivation, picking up shares of an aerospace stock seems like a smart thing to do with tax refund dollars that are burning a hole in your pocket.

Providing aviation-related services to both private and government customers around the world, AAR is a leading name in the aerospace industry. It has been a wild ride for the company and its shareholders as COVID-19 has rocked the aviation industry. While the stock plummeted more than 79% last year from Jan. 1 to March 18, it has subsequently soared higher, climbing 148% over the past year. 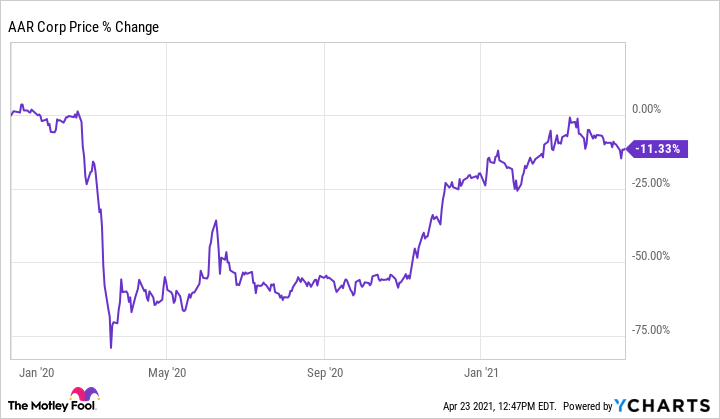 Management's optimism seems to be further substantiated by the company's recent margin expansion. In Q3 2021, for example, AAR reported an adjusted gross margin (excluding money received from the CARES Act) of 16.1%, up from 13.9% in the second quarter; likewise, the company's adjusted operating margin grew sequentially from 4% to 5%.

Turning to financial health, investors will find that the company is in good shape. With a net debt-to-EBITDA ratio of 2.4, AAR isn't relying too heavily on leverage to weather the current industry downturn. Moreover, the company ended its most recent quarter with a current ratio of 3.8, illustrating further that its sound financial position -- namely its ability to service its debt -- should mitigate investors' concerns that the company can't withstand the headwinds that it's facing.

Today, in particular, seems like a great time to hop aboard with an investment in AAR. The stock is currently changing hands at about 25 times operating cash flow -- a steep discount to its five-year average multiple of 61.

Turning to the commercial aerospace business (Pratt & Whitney aircraft engines and Collins Aerospace avionics, power generation, and propulsion systems), Raytheon is also very well placed. The commercial aviation market is already recovering, and Pratt & Whitney has legacy engines to service with lucrative aftermarket products. Its geared turbofan engines (an option on the Airbus A320 NEO) will generate long-term aftermarket revenue on the most popular narrow-body airplane.

CEO Greg Hayes believes Raytheon's free cash flow will "continue to grow over the next several years back to that $8 billion to $9 billion that we had forecast" at the time of the merger of Raytheon Company and the aerospace businesses of United Technologies.

If he's right, then Raytheon will trade on 13.2 times to 14.9 times its free cash flow in a few years. That would be an excellent value for a company with such a strong market position in the global aerospace market.

From darling to dog

Daniel Foelber (Virgin Galactic): What was once a Wall Street darling has turned into a dog. Enter Virgin Galactic, which has seen both founder Richard Branson and Cathie Wood, the CEO of ARK Invest, unload some of their positions over the last week. From its high on Feb. 11, Virgin Galactic is now down a painful 63%. 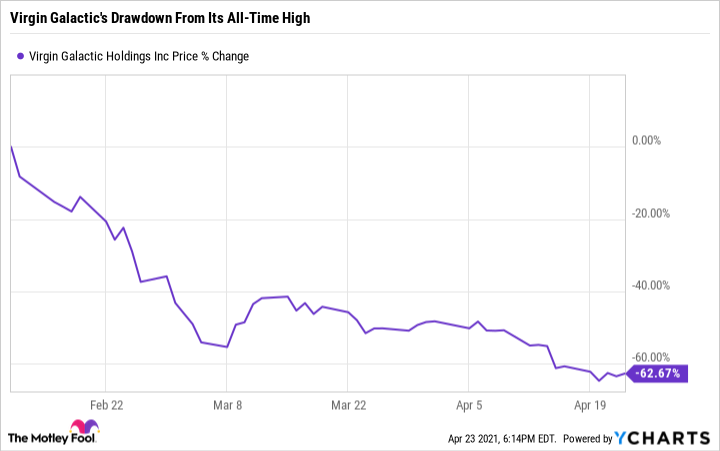 The primary reason Virgin Galactic is plummeting is due to delays. Launched in 2016, the company's VSS Unity SpaceShip II has the potential to unlock the door to the commercial space tourism industry. After breaking through Mach 3 in February 2019, the craft has undergone a series of modifications and glide flights. Before it brings customers into space, it has to pass a series of flight tests and FAA verification reports.

Virgin Galactic intended to launch the first of three test flights in December 2020, but it was delayed due to electromagnetic interference (EMI). After another delay in February, the test is now scheduled for May, six months behind schedule. If all goes according to plan, the second and third test flights are expected to occur this summer. The third flight will showcase Branson and demonstrate the customer experience in space. Then, after a four-month "combined analysis and refurbishment period," Unity is expected to begin taking passengers into space in early 2022.

Even at its reduced price, Virgin Galactic is still a $5.5 billion company. And with just $238,000 in 2020 revenue and a loss of $273 million, this valuation makes no sense on the surface. To justify its price tag, Virgin Galactic needs to get customers into space and start earning money.

While it's easy to criticize the company for its delays, it's also worth mentioning that this is a completely new industry. Virgin Galactic is quite literally trying to accomplish something that has never been done before. With high upfront costs and lacking the benefits of scale, the company is unlikely to fill out its vision for several years. Its path to profitability could take over a decade. But with a first-mover advantage in an exciting industry, it seems like a worthwhile growth investment. The barriers to entry are high and the price of the stock has come down. However, investors should pay close attention to the May test flight and other targets to ensure Virgin Galactic can stay on schedule. Broken promises and multimillion-dollar losses only go so far, especially if insiders are selling the stock.