Why you should consider this company for a streaming investment.

The global streaming market is poised to growth over 20% annually through 2028, according to Grand View Research. When people think about how to invest in this space, CuriosityStream is unlikely to be one of the first stocks to come to mind, but perhaps it should be.

CuriosityStream is a streaming company focused solely on factual entertainment. With its enterprise value sitting under $1 billion, the company still has a lot to prove but also the potential to deliver a lot of upside. Let's explore how the company goes about growing in a dauntingly competitive sector and how that strategy is working so far. 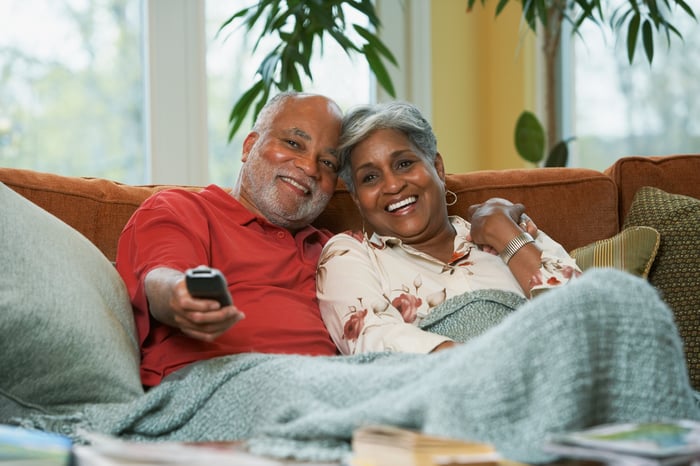 CuriosityStream takes a multi-layered approach to revenue growth. In 2020, only 49% of its revenue came from direct-to-consumer channels. This includes revenue from distribution partners like Roku as well as revenue from the corporate partners it builds content libraries for -- meaning CuriosityStream's own streaming service makes up an even smaller piece of the pie. So where does the other 51% of revenue come from?

The company leans heavily on bundled distribution to scale its total subscriber network. It partners with providers such as Altice USA and Liberty Global to boost its reach and also recently signed a partnership with Tata Sky Binge, an Indian streaming platform with 19 million subscribers as of Nov. 2020. Fortunately for CuriosityStream, its content creation costs as little as 1/20th of the cost of scripted productions. This makes it easier for the company to profitably bundle at low prices for 35% of its total revenue.

CuriosityStream knows it simply does not have the brand awareness or capital to get to 100 million subscribers like Walt Disney did so easily, so the underdog gets creative. Beyond bundling deals, the company selectively sells some of its content to companies like Warner Media when it makes the most sense from an economic standpoint. While this channel isn't quite as exciting as its others, it did contribute 15% to 2020 sales.

Interestingly, the company is starting to offer sponsorship opportunities to blue-chip brands. Companies like Toyota and Echelon have already signed on as customers, and CuriosityStream's strict focus on educational, factual content makes it a safe pick for high-quality brands. Today, this represents just 1% of revenue, but the company expects it to reach 10% to 20% over time.

Going forward, CuriosityStream will be looking to partner with universities and libraries to build co-branded streaming services, and it has brought several leaders from the academic community onto its advisory board to help spearhead that effort.

The advantage of CuriosityStream's approach and how it's doing

The company's multi-pronged approach to revenue generation makes growth extremely predictable, even for such a young company. It took CuriosityStream just one quarter to lock in commitments for 80% of its 2021 revenue forecast, and on its latest earnings call, management said, "[W]e'll definitely hit our full-year numbers."

How can this small-cap streaming operation with just $39.6 million of revenue last year have so much confidence?

It helps when corporate and educational partners are signing multi-year contracts with the company. It's one thing to rely on a consumer not cancelling a month-to-month subscription, and it's another to rely on signed contracts. Additionally, CuriosityStream's subscribers pick its annual plan (over the monthly plan) 75% of the time. This reduces churn and greatly enhances visibility.

In 2020, CuriosityStream grew revenue 120% year over year with gross margin coming in at a solid 61%. It also reiterated its target of at least 80% revenue growth for 2021. The company is still quite far from profitability, but it's moving quickly in the right direction. The net loss margin improved from 236% to 97% year over year, and the company expects to be net-income positive by 2022. That would represent a dramatic improvement, and while there's no guarantee it can stay on that timeline, so far so good on the company delivering on its promises.

While CuriosityStream still has a lot to prove, it has established itself in a unique niche of the streaming industry that is fueling rapid growth for the company. For that reason, I've added it to my portfolio and believe any growth investor should consider doing the same.