Please ensure Javascript is enabled for purposes of website accessibility
Log In Help Join The Motley Fool
Free Article Join Over 1 Million Premium Members And Get More In-Depth Stock Guidance and Research
By Rick Munarriz - Apr 26, 2021 at 9:05AM

If you're bearish on the electric vehicle pioneer, I was there, too. I'm not there anymore.

When Tesla (TSLA 2.55%) reports its financial results shortly after Monday's market close, you might want to thank me. I was responsible for one of the 180,338 Tesla vehicles produced -- one of the 184,800 delivered -- during the quarter. I also became a shareholder in February just as I was ready to slide behind the wheel of my first electric car.

It was inevitable that I would own a Tesla, especially after it introduced the Model Y last year that offered the roomy footprint that I desired in a car at a low enough price point to finally take the plunge. My path as a Tesla investor is a bit more complicated. I had my doubts. You may very well still have doubts. Give me a chance to explain why I changed my tune on Tesla. 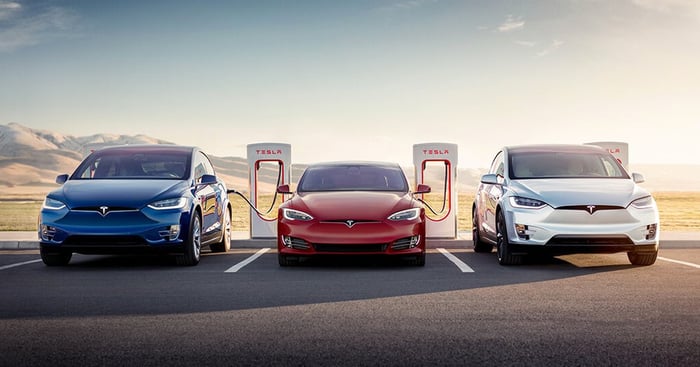 I had an early shotgun seat for Tesla's spectacular run. I've been part of David Gardner's analyst team for the Motley Fool Rule Breakers newsletter service since its inception in 2004. I was there in late 2011, nearly a decade ago, when he singled out the revolutionary automaker as a recommendation.

Tesla Motors has been a scintillating 115-bagger along the way. My own portfolio missed out. I had my doubts on valuation, even at much lower levels. I had my concerns that range anxiety, pricing, and an Americana love for internal combustion engines would limit Tesla's mainstream appeal. I was so wrong. I decided it was time to make things right.

Tesla is game changer. It's profitable. It's everywhere.

If you're shaking your head, I was there. If you're going to rattle off the names of several of the world's leading automakers to point out how Tesla's market cap of $700 billion is more than all of them combined, you've come to the right place. A year ago, my bullish counter would've been to check your math. Why aren't you going with enterprise value for its heavily leveraged peers? Are you accounting for the pension obligations?

My counter argument now is far more nuanced. When I took my Model Y home, the app had two upgrades waiting for me. I could pay $2,000 more if I wanted it to accelerate faster. I could click my way to a $10,000 upgrade to enhance the already-powerful included Autopilot features to Full-Self Driving mode. If the autonomous update is too rich for your blood, don't worry. A monthly subscription plan is on the way.

One can argue that Tesla could've just unlocked the features and made the car more expensive, but that's missing the point. It costs nothing for Tesla to flip the switch, but it's also a tool it can use to widen its addressable market while scoring huge margins for those willing to pay for more. Then we get to the beauty of it all: When someone trades in the car, Tesla can just sell those upgrades a second time around.

We also can't forget about the perpetually expanding fleet of Supercharger stations. Other electric vehicle makers are leaning on third-party charging stations. Tesla plays nice there, too, but it's the 20,000 (and growing) charging kiosks that should really get you excited. The Supercharger network is a differentiator, and your Tesla can calculate any route optimized with charging stops along the way.

If the Supercharger stations still don't resonate with you, just imagine if any other automaker also owned every gas station you would ever need to fuel your ride. That would be pretty special.

Tesla is special. Is a $700 billion price tag justified? The deeper you dig into the ecosystem, the more obvious it becomes. Paying more than 20 times trailing revenue or more than 100 times next year's projected earnings may seem outrageous for an automaker, but all of the once-laughable claims that Tesla is a tech stock in an auto body are legit. Premium over-the-air upgrades, an app ecosystem that's still in its infancy, a big lead in autonomous driving, and an aspirational brand that will always warrant a premium to the realm of late arrivers make Tesla stand out.

Tesla is a vertically integrated disruptor. It's the next-gen transportation giant that all automobile stocks want to be when they grow up. I was nearly a decade late in appreciating what I saw play out from the perfect vantage point. Don't settle for riding shotgun. Take the wheel.