Promise of an economic recovery and interest in high-growth stocks helped lift markets to begin the week.

Wall Street came into the new week in a good mood, as major market benchmarks moved further toward or into all-time record territory. Investors haven't yet gotten spooked by potential changes to the tax code and are instead focusing on upbeat outlooks from many companies reporting earnings. As of 11:30 a.m. EDT, the Dow Jones Industrial Average (^DJI 0.23%) was up 48 points to 34,091. The S&P 500 (^GSPC 0.36%) had moved higher by 13 points to 4,193, and the Nasdaq Composite (^IXIC 0.00%) had climbed 86 points to 14,103.

Shares of Freeport-McMoRan were higher by 7% Monday morning. The mining giant got a boost from favorable price action in a key commodities market. 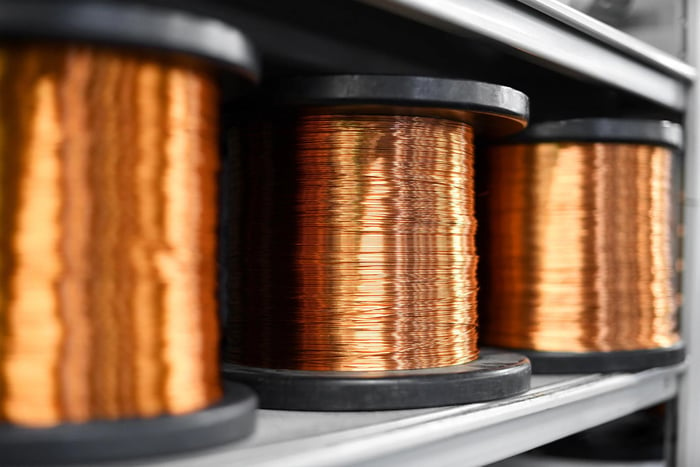 Copper prices rose to their highest levels in nine years, climbing 2% to move above $4.40 per pound. Those prices are roughly double where they were during the worst periods of the coronavirus bear market in March 2020, and they're up by nearly 50% just since November.

Copper has been in high demand for a number of reasons. The metal plays a key role in traditional infrastructure, with plumbing pipes and electrical wire often using copper to take advantage of its resiliency and conductivity. However, copper is also on the cutting edge of technology, as it's an essential component of electric vehicles and renewable energy equipment.

With the federal government looking more closely at initiatives to spur infrastructure spending and bolster renewable energy, Freeport-McMoRan finds itself in an enviable position as one of the largest copper producers in the world. If prices stay favorable in the copper market, Freeport-McMoRan shares could have further to climb.

Meanwhile, shares of Proofpoint soared 31%. The cybersecurity specialist got an offer that was too good to turn down and will likely soon no longer trade its shares on the public stock markets.

Private equity investment giant Thoma Bravo reached an agreement with Proofpoint on a $12.3 billion acquisition bid. Under the terms of the deal, Proofpoint shareholders will receive $176 per share in cash, which is 34% above its Friday closing price.

The move reflects relative valuations in the cybersecurity field. Proofpoint's revenue is larger than industry peers CrowdStrike Holdings and Okta, but its growth rates have slowed down considerably compared to its younger, faster-growing rivals. The market has valued sales gains over absolute revenue, and so valuations for Okta and CrowdStrike were far higher as a multiple of revenue than Proofpoint even after the acquisition-related bump.

For its part, Proofpoint is excited about the move, hoping that Thoma Bravo will help it grow even more quickly. With plenty of demand for cybersecurity services, Proofpoint may yet find greater success -- even if public shareholders aren't around to reap the benefits.